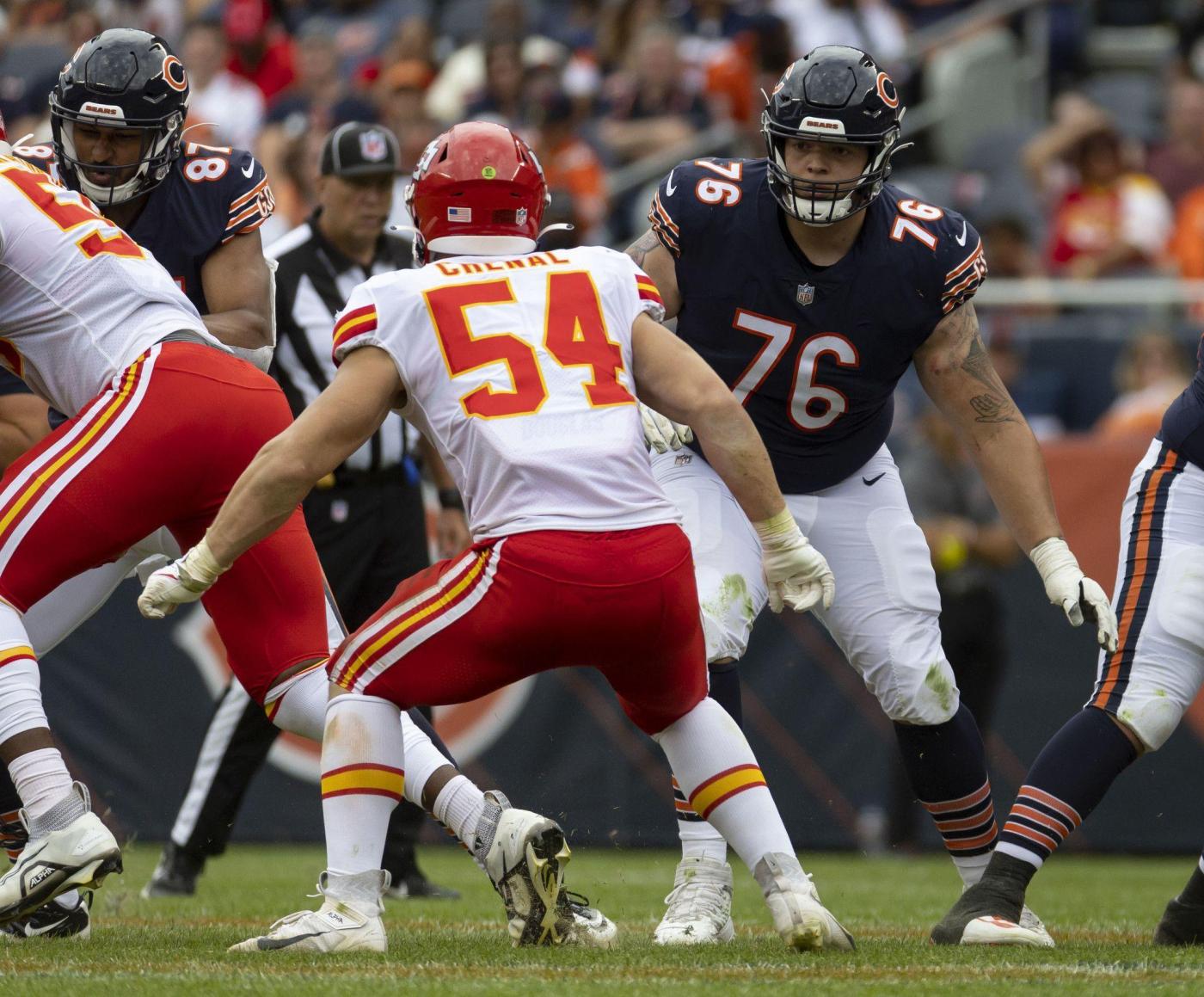 When Roquan Smith stepped in front of reporters Saturday afternoon after his first practice of training camp, the Chicago Bears linebacker said he has as much on the line as maybe any player on the team this season.

“Betting on myself,” Smith said upon ending his 3½-week “hold-in.”

In playing out his fifth year with the Bears after failed contract negotiations with general manager Ryan Poles, Smith leads our list of five returning Bears players who face big questions this season.

1. Will Roquan Smith earn the payday he wants in his fifth season?

As the Bears inched closer to the season, Smith didn’t see his situation changing in the weeks ahead. He and the Bears weren’t in agreement on a new deal. The Bears declined to trade him, he said. And Smith knew without either of those moves in place, he needed to get ready for a crucial season for his future.

So Smith returned to practice over the weekend with his attention turned away from negotiations and toward football and what he can do to convince the Bears — or another team — he’s worth the type of contract he wants. The Bears would have the option to use the franchise tag on Smith in 2023, but he noted that should be “a nice number next year.”

Smith, the No. 8 pick in the 2018 draft, was a second-team All-Pro in each of the last two seasons, a span in which he totaled 302 tackles, 30 tackles for a loss, 10 quarterback hits, seven sacks, 10 passes defended, a forced fumble and three interceptions, including a pick-six.

By not settling for the Bears’ offer, he’s betting he can not only produce consistently like he did in those seasons, but also stay healthy and make enough game-changing plays to be paid as one of the NFL’s top off-the-ball linebackers.

2. Can a big year for David Montgomery lead to a new contract?

Montgomery also is in a contract season after rushing for 2,808 yards and 21 touchdowns and catching 121 passes for 924 yards and three touchdowns in his first three seasons. That included one 1,000-yard rushing season in 2020 and four missed games because of a knee injury in 2021.

There could be big opportunities for Montgomery to thrive in Luke Getsy’s offense. But the 2019 third-round pick out of Iowa State said he isn’t spending much time thinking about his next contract.

“It’s going to take care of itself,” Montgomery said. “I ain’t really worried about that. I’ve got bigger fish to fry. … Because at the end of the day, I’m trying to play football and have fun doing that. Everything else will take care of itself. I’ve got no worries in the world.”

Montgomery enters this season with a new view on life.

He was open during a media session earlier this month about struggling with mental health the last three seasons. He said he created “unnecessary pressures” on himself. The news that he has a child on the way caused him to speak up that he was hurting, and he described himself as being on a “spiritual journey” to getting better.

“It was more so with myself, not meeting the standards or the expectations that I put on myself, going back to creating those unnecessary pressures for myself,” Montgomery said. “A lot of people don’t understand being in the NFL, like us as individuals, we go through a lot of mental battles on a daily basis, but since we’re athletes and we’re professionals and we get a lot of money, that gets overlooked.

“But at the end of the day, we’re still human beings and people forget about that. So for me, for a while, I masked it. I was just in a bad place mentally, how I was looking at life, how I viewed it. I was unhappy. But it’s on the up and up now, and I’m grateful and I’m blessed that God brought me here.”

3. Will the new coaching staff help Justin Fields unlock his potential in Year 2?

Unlike Smith and Montgomery, Fields’ contract concerns aren’t imminent, but no question is more intertwined with the Bears’ future success. And no player on the Bears will be watched closer for signs of progress under Getsy and quarterbacks coach Andrew Janocko.

For Bears coaches, keeping Fields focused on daily improvement is the best approach to such important development.

“It’s one of the most critiqued positions in the world — I would say critiqued jobs in the world,” Janocko said. “So it’s just doing your job, understanding what it takes to be successful, reemphasizing that every day. Then picking out little things every day to improve on and always having a focused area on what we’re going to get better at today.

“Whether it’s feet, whether it’s timing, whether it’s something about the X’s and O’s, but having a plan ready every day to say, ‘Hey, we’re going to get better at this today.’ When you focus in on smaller areas like that, then you see big jumps.”

It wasn’t an ideal start, in part because Fields opened the season as Andy Dalton’s backup before coaches threw him into the fire in Week 3 and because Fields battled injury and illness later in the year.

But Fields has reasons to be hopeful for growth this year — from Getsy’s offense that might be better tailored to Fields’ skill set to the lessons learned from his first season.

“I’m way more comfortable just being in the NFL this year and of course having played a year,” Fields said. “I’m just going to keep working, keep stacking days and continue to get better at the small details each and every day.”

4. Can Teven Jenkins solidify a starting spot on the offensive line?

Two weeks ago, Jenkins might not have made this list after an undisclosed ailment early in camp and trade rumors made him look like the potential odd man out on the line. Now, after his preseason debut at right guard, it’s fair to wonder if Jenkins can salvage his future with the Bears at that position.

With Braxton Jones, Larry Borom and Riley Reiff competing at tackle, Jenkins moved inside last week, spent two practices at right guard and then played there against the Seattle Seahawks. Bears coach Matt Eberflus said he turned in a “solid” performance.

“We were impressed,” Eberflus said. “He did a nice job. Now he’s got to continue to grow at the position. Like everybody else on the team, he’s got a lot to work on. But he had a good first outing in there.”

Jenkins, a 2021 second-round pick, hasn’t had an easy start to his career, undergoing back surgery during last year’s training camp and coming back to play in just six games with two starts as a rookie. The odd start to this camp didn’t help, but perhaps he has found a path to making an impact with the Bears.

“He’s handled it like a pro,” Montgomery said. “He doesn’t complain. He comes to work every day. I never heard him say anything negative in any way. Every time I talk to Tev, it’s always, ‘I’m trying to get better, trying to improve myself so I can be the best version of myself.’

“That’s super refreshing to see from somebody who handled the level of adversity that he did handle his first year.”

5. Can Eddie Jackson make the game-changing plays that stood out early in his career?

A lot of players could have taken this fifth spot, including tight end Cole Kmet and wide receiver Darnell Mooney, the 2020 draft picks who could be in line for big seasons.

But Jackson is an interesting case. He hasn’t had as much success since signing a four-year, $58.4 million contract extension in 2020 and now is trying to impress a new set of coaches.

He and Eberflus both called this season a “fresh start” for the sixth-year safety, who had 10 interceptions in his first three seasons and none in his last two. Jackson also had five defensive touchdowns in his first two seasons and one since, though he has had some called back because of penalties.

He said earlier in camp that he feels at ease “mentally, physically, emotionally” with the coaches, the scheme and the way the team is working. Can the 28-year-old rejuvenate his career and positively influence rookie safety Jaquan Brisker?

“I just feel like the years I had, I wasn’t satisfied with them, didn’t live up to expectations and standards that I set for myself. So to go out there this year is like a whole new start, whole new season, whole new team. I feel like a rookie coming in again, just learning, soaking up this game and leading my guys the way I work and the way I do things.”