5 takeaways from the Chicago Cubs’ 5-2 loss to the Milwaukee Brewers, including Justin Steele’s stellar outing with Jon Lester attending 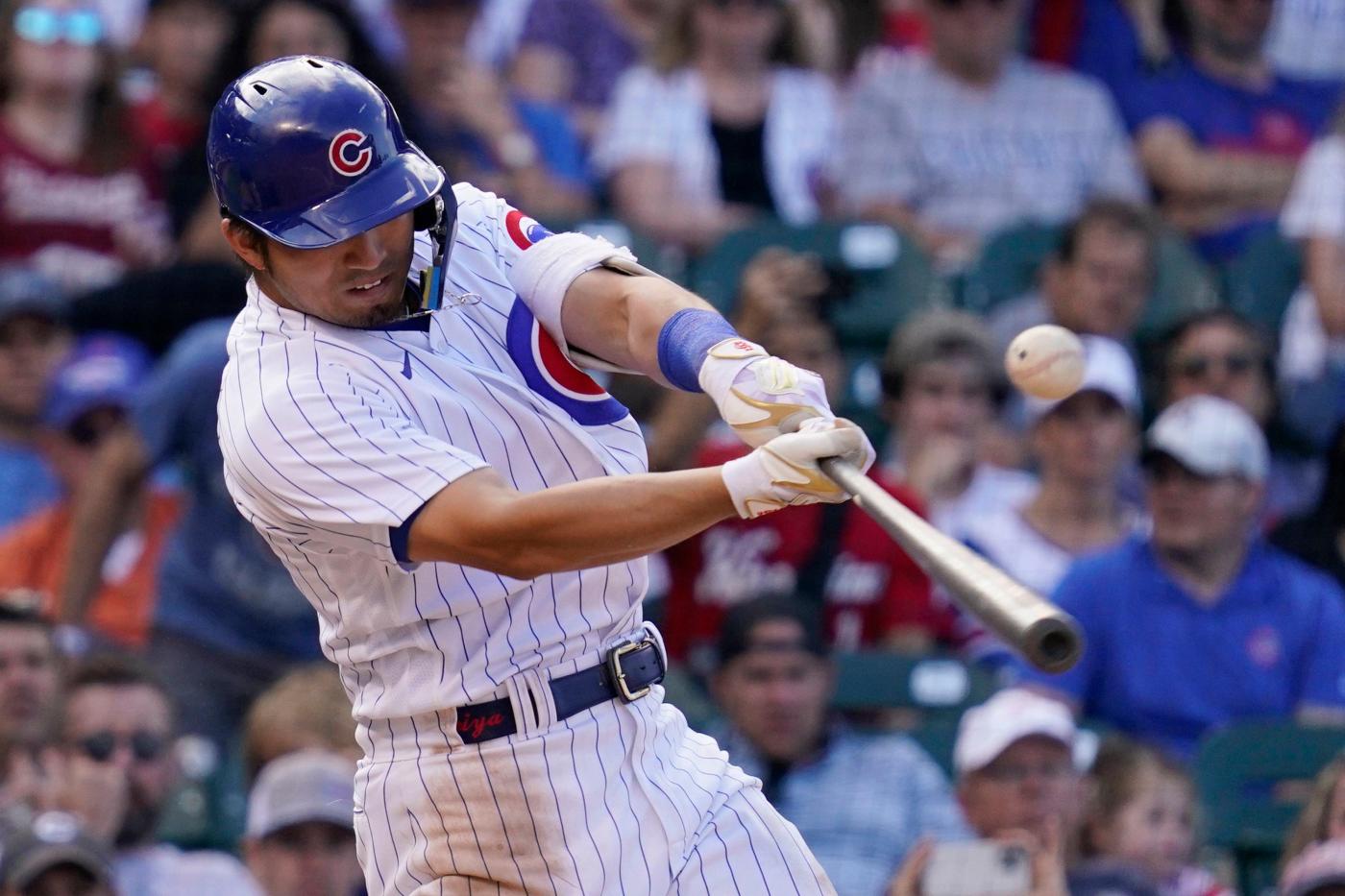 Ian Happ hit his 100th career home run in the first inning, but the Chicago Cubs dropped a 5-2 decision in Sunday’s series finale against the Milwaukee Brewers at Wrigley Field.

The loss broke a five-game winning streak and wasted a stellar showing by Cubs starter Justin Steele. The left-hander struck out nine in six shutout innings, allowing two hits and one walk.

“From where he’s come from early in the season, it just feels like you’re getting that performance every time he steps onto the mound,” Cubs manager David Ross said. “One inning he had to work really hard there and finished really nicely those last two.

“Impressive every time out and very consistent, which is really hard to be.”

“One hundred homers that fast, especially from a switch hitter,” Ross said. “Guy’s had a really nice year and that’s just the icing on the cake.”

Speaking of cake, Happ said the young fan who caught the home run ball was celebrating his 10th birthday, but Happ was able to coax the souvenir from him by signing some memorabilia.

“Really cool milestone in this park to do it at home,” Happ said. “And to be able to share it with a fan. Really cool 10th birthday, I think.”

Happ said he felt humbled to be in the company of 25 other Cubs who reached the century mark with the team. He also gushed about Steele’s performance.

“Yan (Gomes) did a great job back there calling the game, but (Steele has) been in the zone,” Happ said. “Lot of swing-and-miss on the fastball, and he’s been able to get through six-plus innings, which is a big deal. He’s continuing to get better and figure out his game more and asking questions in the dugout.

“As he goes through, he’s figuring out more and more — all right, if I use different pitches, different situations, set hitters up for later in the game — all those things that come along with being a big-league starter.”

Steele struck out the side to open his 23rd start of the season, and his nine strikeouts bring his total in four starts this month to 33.

It’s turning out to be a hot August for Steele, even though the game-time temperature Sunday was 71 degrees with a breeze.

But don’t tell that to Steele.

“I was definitely sweating,” he said. “It was humid out there. I looked this morning, (the forecast) was like 70 to 80? I felt like every time I was walking up the steps, as soon as I hit the air I started sweating. Lord have mercy.”

Here are five takeaways from the game.

1. With a promising lefty on the mound, Jon Lester picked a good time to visit.

The retired Cubs pitching great made the rounds and waved to applauding fans when he was shown on the video board.

Ross was happy to see his former teammate from the 2016 World Series champions, but they didn’t talk baseball.

“He’s full into the kids and the family dynamic. … I think his golf game has improved for sure. See if he can help us out in the pen, we’ve been taxed a lot lately,” Ross joked before the game. “But he says he’s a starter only.”

Lester made an impression on Steele, who introduced himself before the game.

“Told him I appreciated him reaching out to Ross earlier in the season,” Steele said. “He didn’t have to do that, so it was appreciated.”

Steele averaged 92 mph Sunday with his fastball, which he used two-thirds of the time. His slider, which he threw for 26% of his pitches, induced a 40% whiff rate, according to Statcast.

“I don’t want to complicate it either,” Ross said of Steele’s pitch mix. “The guy we’ve got right now is pretty darn good.”

Said Steele: “Just using my eyes to try to read what’s going on. I was doing a good job of getting my four-seam into the righties.”

For the second straight start he lasted at least six innings without giving up an earned run. He accomplished that benchmark for the first time in his career Tuesday against the Washington Nationals.

Steele has allowed three earned runs in 31⅓ innings over his last six outings since July 22, and his 0.86 ERA during that span is the lowest in the majors among qualifiers.

“What he’s been able to do, even before the second half, what he’s settled into, that’s who he is,” Happ said. “That’s who he can be.

“Jonny Lester being here and that advice of attacking the inside of the zone and playing that four-in to open everything else, (Steele is) taking that and really running with it.”

Despite the effort, Steele received his fourth straight no-decision. But win or lose, he said he’s “just constantly learning and evolving from each start.”

2. Ian Happ checked off another milestone.

Happ became the 26th Cub to hit 100 career homers with the franchise.

Happ reflected on how he was the subject of trade rumors earlier this season and the shot at Cubs history a deal would have cost him.

“Being able to be here and get a chance to do it was really special,” he said. “Looking up at that switch-hitter list … that’s special to me.”

Happ on Monday became the sixth switch hitter in major-league history with at least 11 homers in each of his first six seasons. Mickey Mantle, Eddie Murray, Ruben Sierra, José Cruz and Mark Teixeira are the others.

Each milestone also has come with some gifts.

“Lester signed a bottle for me — Ace of Spades (champagne) bottle was his thing — for my first home run ever, and he signed that and I still have it,” Happ said. “Rossy just gave me a nice bottle of (Johnny Walker Blue Label) scotch with a little something on it. Wade (Miley) gave me something for the All-Star Game.

“You start to accumulate stuff like that, it’s pretty cool when you look around and have a bunch of those.”

3. Justin Steele had to weigh whether to gain weight in the offseason.

Most athletes who aren’t sumo wrestlers or offensive linemen — and certainly baseball players — try to shed pounds before the season, but Steele said that didn’t necessarily work for him and this season is proof.

During seven years in the minors, he experimented with different sizes going into the season, “whether it was putting on weight, putting on muscle, little bit of fat that I’m going to burn through all through the season. Just trying to find the right formula for myself.”

More weight has worked for Steele, who is listed at 6-foot-2 and 205 pounds.

“My family, we’re very active, very skinny. We do not hold weight very well,” he said. “From the history of myself in the minor leagues, I know that I’m going to lose weight throughout the season, so I knew just by trial and error I need to come down with some pounds on me because I know I’m going to end up eventually losing the weight.

“I don’t want to be where I start losing the weight (and) I start risking myself to injury, so you kind of want a cushion. Everybody’s different.”

4. The bullpen was a bust, but there’s a reason.

Rowdy Tellez homered off Mark Leiter Jr. in the seventh to get the Brewers on the board. Brandon Hughes replaced Leiter, and Hiura took Hughes’ second pitch deep to tie it 2-2.

Willy Adames drove in Kolten Wong on a sacrifice fly off Rowan Wick in the eighth. And Hiura homered again in the ninth, a two-run shot off Kervin Castro’s first pitch.

Relievers have earned the win in six of the Cubs’ last eight victories. Ross won’t get down on them, saying it looks like “maybe that usage is catching up to them.”

“We’ve used them pretty hard and we’ve been winning a lot of games, so a lot of those guys have been getting stretched thin,” Ross said. “Leiter wasn’t as sharp as he normally is. Hughesie’s stuff didn’t look quite as sharp — it’s rare that he gives up damage to righties.

“It’s just one of those days. … (The Brewers have) a team that when they do barrel it, it goes in the seats a lot. Just a rough day for the bullpen. Good series overall.”

5. Seiya Suzuki had a nice showing too.

It was easy to be overshadowed by Happ’s milestone and Steele’s day on the mound, but Suzuki went 3-for-3 with his 10th homer of the season and a walk.

“The homer, the double, the walk,” Ross noted. “The ball he hit to center was crushed, 108 (mph) off the bat. With the wind blowing in, that’s a big-time homer.