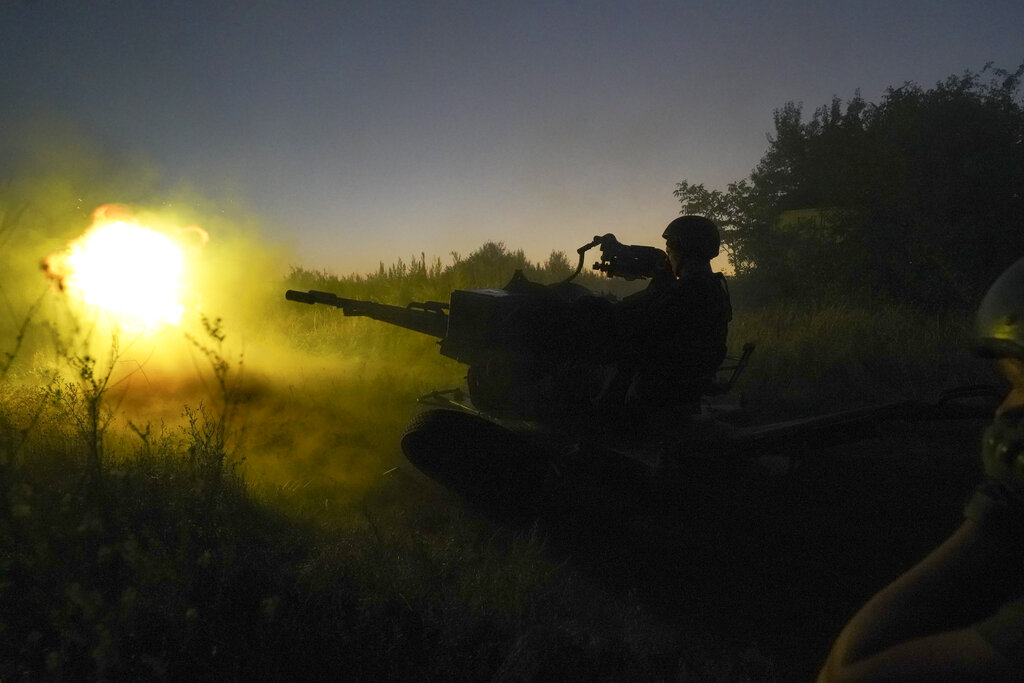 Aug. 24 marked six months since the start of Russia’s war on Ukraine. It was also Ukraine’s Independence Day. Yet instead of celebrating, Kyiv canceled all holiday observances across the country as major cities braced for vicious Russian missile attacks.

“We have to be aware that this week, Russia may try to do something particularly cruel,” Ukrainian President Volodymyr Zelenskyy warned last weekend.

Vladimir Putin could use the excuse of the car bomb that killed Darya Dugina, the daughter of Russian ultranationalist Alexander Dugin, as a pretense to strike Kyiv. Russia claims Ukraine carried out the bombing, which Zelenskyy’s government denies. Given the long history of Kremlin political assassinations, the murder is far more likely a Russian “false flag” operation to justify more violence against Ukraine, or even the work of anti-Putin Russian partisans.

It is also a reminder that the West still hasn’t given Ukraine what it needs to stop Russia’s murder of civilians from the skies.

Despite sending some new weapons that have enabled Ukraine to hit Russian supply lines, the Biden administration has still not supplied the long-range artillery and rockets, warplanes and anti-aircraft systems that would enable Kyiv to mount a serious counteroffensive in order to take back Russian-occupied land.

That means Kyiv can’t regain control of its Black Sea coast, on which its economy depends, or the 20% of Ukrainian land that Russia now occupies and seeks to annex. Without such weapons, Ukraine faces a long and deadly war of attrition, while Putin waits for the West to tire of supporting Kyiv.

Yet the White House still won’t do the only thing that can prevent an endless war that could get much more deadly: give Ukraine the long-range weapons it needs right now.

On my recent trip to Ukraine, I saw the grim results of Russia’s free hand to kill civilians with rockets and missiles: smashed apartment towers, shattered schools, hospitals and malls, villages with every house destroyed, victims in hospitals and morgues.

In Kharkiv, Ukraine’s second-largest city, which used to have a population similar to Philadelphia’s, I recently walked along concrete paths between the wrecked high-rise apartment complexes of North Saltivka with Col. Egor (as an active-duty service member, he used only his first name). “The Russians just strike blindly,” he said, as we walked by charred cars, an empty playground and blackened buildings.

“When the first strikes started, people evacuated and had to leave everything from their whole lives,” said the colonel. A lone elderly woman, bent over with lank gray hair and walking haltingly, asked if we knew where she could find water. A mattress, blown out of an apartment by a missile strike, lay on top of a pulverized car.

Every night, and sometimes by day, more Russian missiles and rockets strike civilian buildings in Kharkiv, often from inside Russia, whose border is only 20 miles from the city.

What frustrates Brig. Gen. Sergei “Marcel” Melnik, commander of the Kharkiv Garrison, whom I spoke to at the front lines via WhatsApp, is that he doesn’t have long-distance weapons that can take out the Russian missile launchers. “We need these weapons because every day Ukrainians are dying: someone’s son, someone’s daughter, someone’s mother,” he said, his voice rising.

“When it takes this long” — to get such weapons from the West — “the Russians have the opportunity to regroup. Every day someone’s family will be destroyed.”

The general, known for his close relationship with his officers and troops, played a key role in pushing the Russian military back from the edge of Kharkiv in the weeks following the invasion. But the Russians still hold Ukrainian territory around Kharkiv. Melnik wants to drive them back across the Ukraine-Russian border, far enough so that Kharkiv is beyond missile range.

However, the White House has demanded (and received) a commitment from Ukraine not to fire into Russia, not even with precision strikes aimed specifically at launchers targeting Ukraine. And President Joe Biden has refused to give Ukraine the longer-range precision missile systems like the ATACMS (Army Tactical Missile System), with a range of 190 miles that could safeguard Kharkiv’s skies.

“If your government allowed us to strike precisely where Russian rocket systems are located and where there are no civilians,” Melnik told me, the Ukrainian military could “free our northern regions. We have a right to destroy these Russian weapons. Our only intention is to protect our borders.”

Melnik’s frustration sums up the basic problem with current U.S. policy toward Ukraine.

The longer this war drags on, the more Putin will be emboldened to pursue his dream of annexing Ukraine and destroying those parts he can’t conquer. It raises the risk the Russians will endanger the Ukrainian nuclear power plants they occupy, as they are doing in Zaporizhzhia.

And delays increase the likelihood that Western support will weaken under pressure of high gas prices — or the growing unwillingness among GOP Trumpists to help Ukraine.

So it is in Biden’s interest to help Ukraine mount a counteroffensive before winter. In southern Ukraine, Kyiv’s troops are itching to push the Russians back to, and ultimately out of, Crimea.

Yet the White House is parceling out critical new weapons like the multiple rocket launcher system known as the High Mobility Artillery Rocket System (HIMARS) at a snail’s pace. Sixteen HIMARS, which have famously enabled Ukraine to hit Russian supply lines in the east and south, are only a small fraction of what is needed.

“We are managing the weapons flow (as if) we don’t want the Ukrainians to have a breakthrough,” retired U.S. Air Force Gen. Philip Breedlove, a former NATO commander, told me. “We are not giving them the things they need for a counteroffensive.”

The White House is fearful of giving Ukraine the means to win lest Putin “escalate” his violence. Yet timidity by the Biden administration will convince Putin he can get away with murder — even beyond Ukraine.

“There are no no-risk options,” Breedlove rightly noted. But undermining a Ukrainian counteroffensive, and leaving Putin free to further destroy Ukraine, is the biggest risk of them all.

Trudy Rubin is a columnist and editorial-board member for The Philadelphia Inquirer, P.O. Box 8263, Philadelphia, Pa. 19101. Her email address is trubin@phillynews.com