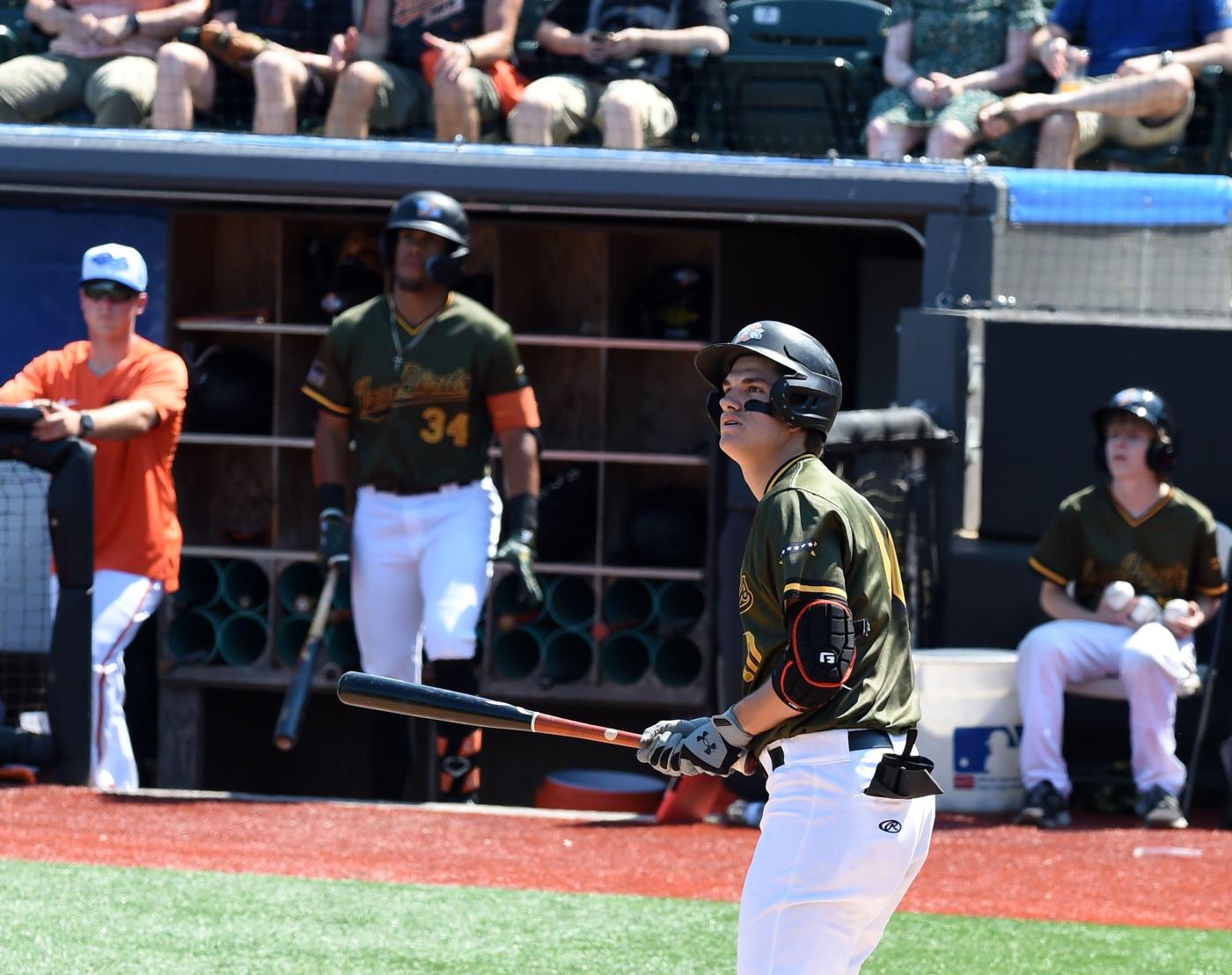 As Coby Mayo, Colton Cowser and Connor Norby packed their bags and headed for Double-A Bowie on Monday, the upper realm of the Orioles’ minor league system gained another trio of highly ranked prospects.

With those additions, 10 of the top 11 prospects in Baseball America’s organizational rankings are in the upper minors or the major leagues. It’s a step in the right direction for the Orioles’ rebuild. The glut of prospects acquired through trades and high draft picks are displaying the promise the regime is banking on coming to fruition.

Several of those prospects performed at an especially high level during the past week, including Mayo. Each week, The Baltimore Sun breaks down five of the top performers in the Orioles’ prospect ranks and hands out some superlatives for those who didn’t make that cut.

Before Mayo’s promotion, the third baseman’s final performance for the IronBirds signaled he was ready for a step up in competition. The 20-year-old hit a double and a home run as part of a three-hit performance, bringing his extra-base hit total to 28. His 13 homers are tied for the most in the organization.

After being acquired in a 2019 trade that sent right-hander Andrew Cashner to the Boston Red Sox, Romero saw his development sidetracked by the cancellation of the 2020 minor league season because of the coronavirus pandemic. But now with consistent at-bats at an affiliate for the first time, the 20-year-old is finding more of a groove.

During the past week, Romero took off for the Shorebirds, hitting three homers while driving in 10 runs with a 1.202 OPS. The power surge came as a surprise; entering the week, Romero had four long balls in his first 47 games. But the ball jumped off his bat this week, with six hits in 18 at-bats.

Life at Triple-A Norfolk has been good for Westburg, who arrived earlier this month and hasn’t missed a step despite the jump in levels. Overall, Westburg went from hitting .247 in 47 games for Bowie to .366 in 16 games for the Tides.

The past week showed what he can accomplish at the plate. The 23-year-old, a first-round selection from Mississippi State in 2020, had nine hits. Two left the ballpark and three went for doubles, and he drove in six runners and compiled a .931 OPS.

Rom, who is ranked as the No. 19 prospect in Baltimore’s pipeline, hasn’t had the steadiest of seasons. In his first Double-A campaign, the 2018 fourth-round draft selection has averaged a career-high 1.442 WHIP.

But his start last week for the Baysox was one of his best this year, as he completed five innings while allowing two hits and two runs with seven strikeouts. His 90 pitches were a season high, and he completed five innings for the first time in nearly two months. It was also his second scoreless outing of the season, as he bounced back from giving up four runs in four innings June 17.

For the second straight week of Kjerstad’s professional career, the 2020 first-round pick raked at the plate. Kjerstad launched the first homer of his career Friday and had two doubles among his eight hits during the week.

Along with a 1.081 OPS as a pro, Kjerstad is riding a nine-game hitting streak for the Shorebirds. His debut was delayed due to a heart condition that was discovered after he was drafted and a hamstring strain during spring training this year. But now that he’s here, Kjerstad isn’t wasting time at the plate.

Top prospect not featured so far

With catcher Adley Rutschman in the majors and right-hander Grayson Rodriguez undergoing rehab work in Florida after an oblique strain, left-hander DL Hall is the top prospect still playing in the minors for Baltimore. But his most recent performances showed what’s holding him back from a place with the Orioles.

The 2017 first-round selection has walked five batters in each of his past two starts for Norfolk. And while defense contributed to his poor outing June 21 — three of the five runs against him were unearned — he still finished with nine earned runs in 7 2/3 innings the past week.

Hall has shown the flashes of great potential, with a high-90s fastball and a sweeping slider that draws plenty of whiffs. But his inability to work deeper into outings is impacting the 23-year-old’s expected arrival in the majors.

International acquisition of the week

In the time since Isaac Bellony was promoted to Aberdeen earlier this month, his production at the plate has wavered. But Bellony, who signed as a 16-year-old in 2018, turned things around in the final two games he played for the IronBirds this past week. He hit .094 in his first nine games before rebounding with a .417 average in his next five, which included a home run and three RBIs.

The best former top-30 prospect of the week

Defensive ability has never been a question for outfielder Zach Watson, who ranked No. 19 in Baltimore’s farm system in Baseball America’s 2020 preseason rankings. His power potential has been more of a holdup for the 2019 third-round pick from LSU.

The 25-year-old doubled his home run count this season in one week, however, sending two balls out of the stadium for Bowie. Although he struck out nine times, Watson recorded seven hits in his best stretch of the season, moving a .177 batting average north to .192.

Time to give some shine to …

Right-hander Zach Peek wasn’t the headliner in the return package of a trade that saw Orioles right-hander Dylan Bundy head to the Los Angeles Angels in 2019. Right-hander Kyle Bradish, the highest-ranked prospect in that deal, made his major league debut this season while Peek is still at Bowie.

Peek has shown potential this season, though, with a 2.68 ERA in 10 starts. His most recent outing might’ve been his best this year, as he completed six innings with one unearned run against him. Peek allowed four hits and struck out four batters on a season-high 87 pitches.

Many of the Orioles playing in the Florida Complex League have started the season slowly. Outfielder Luis Gonzalez, 19, has been among the most consistent of the bunch, with 10 hits in 45 at-bats. During the past week, Gonzalez recorded three hits and walked seven times in four games. Right-hander Miguel Padilla, a 20-year-old in the FCL, turned in his best outing this month with five scoreless innings in which he allowed two hits and struck out six.

In the Dominican Summer League, outfielder Braylin Tavera — who in January received the largest signing bonus the Orioles have ever given a Latin American amateur — has raised his average to .298 with two doubles in four games.