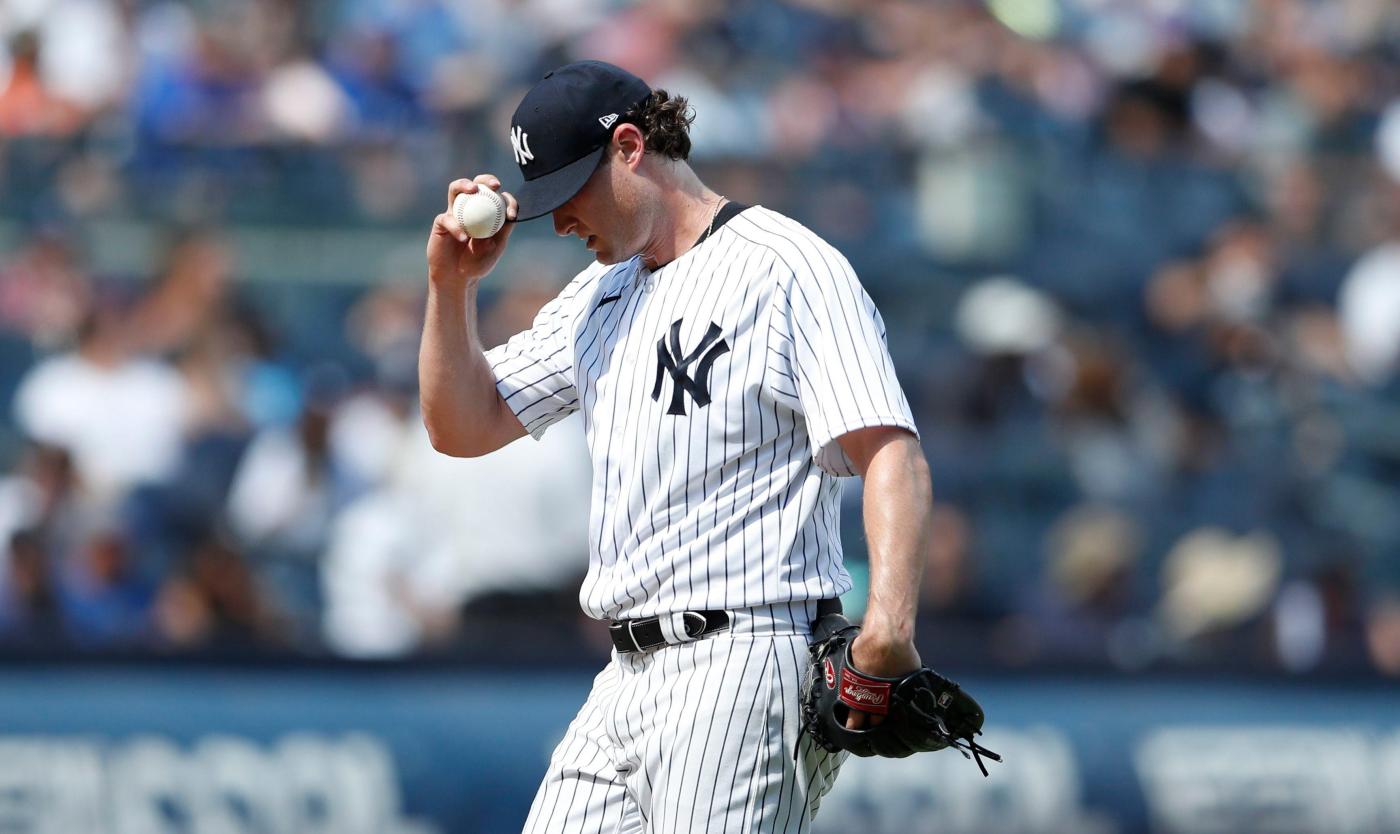 Aaron Judge isn’t happy with the energy. Gerrit Cole is pissed off at himself for walking the No. 8 hitter in the Blue Jays lineup. Aaron Boone slammed his hand down on the table postgame and raised his voice. The Yankees’ horrific slide continued Saturday with a 5-2 loss to the Blue Jays at the Stadium.

The Blue Jays cut the Yankees lead in the division, which was 15.5 games on July 8, to seven games.

“No crap. We’ve been asked all these questions,” a frustrated Boone snapped when asked about the slide. “We’ve answered until we’re blue in the face. We gotta go out and do it. I gotta quit answering these questions … we got to play better period.

“And the great thing is, it’s right in front of us. It’s right here, and we can fix it. It’s right here. It’s there and we can run away with this thing,” Boone said after slamming his hand on the table. “And we got the dudes in there to do it. You gotta do it.”

Right now, the Yankees can’t do much right.

Cole allowed four runs on five hits over six innings. He walked two and struck out five. Cole went heavy with his fastball and his slider again, getting a combined 12 swings and misses with those two pitches.

The Yankees managed nine hits, but none of the clutch ones they needed. They went 1-for-8 with runners in scoring position and are 5-for-36 with RISP on this home stand. Gleyber Torres homered in the eighth and Estevan Florial singled in a run Saturday.

“I think every single guy got a couple of pitches to hit. I think we ended up with maybe nine hits all together, we just couldn’t come up with a big, big hit with guys on base or the big homer that we needed,” Judge said. “I know Gleyber came with a homer late in the game and just gotta have a little better energy in the dugout, kind of push each other a little bit.

“We’re just missing that little bit right now and we got to come up, bring it tomorrow.”

Cole took a no-hitter into the fifth inning before things went south.

Cole struck out Matt Chapman to start the inning, but Santiago Espinal doubled for the first hit off the Yankees’ ace. It unraveled from there. He walked catcher Danny Jansen and then gave up a hard-hit double to Jackie Bradley Jr. off the left field wall to drive in two runs. Raimel Tapia beat out a ground ball to shortstop and Cole slipped coming off the mound to get Vladimir Guerrero Jr.’s dribbler, allowing the Blue Jays’ first baseman to reach — after a video review.

That set up his six-pitch battle with Alejandro Kirk.

Cole tried to go to his reliable high fastball and put one 100 mph at Kirk’s chest. The Blue Jays catcher hammered it for a two-run double off the left-center field wall.

“So, in terms of what I feel like right now, I feel like I shouldn’t have freaking walked Jansen and I should have really made that play,” Cole said of his afternoon. “I’d feel less bad about it if we weren’t in the rut that we were but I’d still feel bad.”

Cole’s last win was July 17 and since then he has allowed 19 earned runs over 37 innings pitched (4.35 ERA) with seven walks and 41 strikeouts.

Chapman homered off Albert Abreu for the Blue Jays’ tack-on run in the ninth inning.

The downward spiral has included a little bit of everything. The pitching has struggled, the bullpen has blown games and most recently the offense has hit the skids.

Judge said the energy and attitude has to change.

“I think it just starts from the very beginning of the game, just having that kind of chip on your shoulder of we’re going to come out here and win this game. I think at times right now, even myself personally, we’re looking for someone else to come up with a big hit or do something and we can’t have that mentality,” Judge said. “We gotta have that mentality that every time we step up to the plate I’m gonna be the guy that goes out there and gets it done. So we’re just missing on the past couple games and we got turned around.”