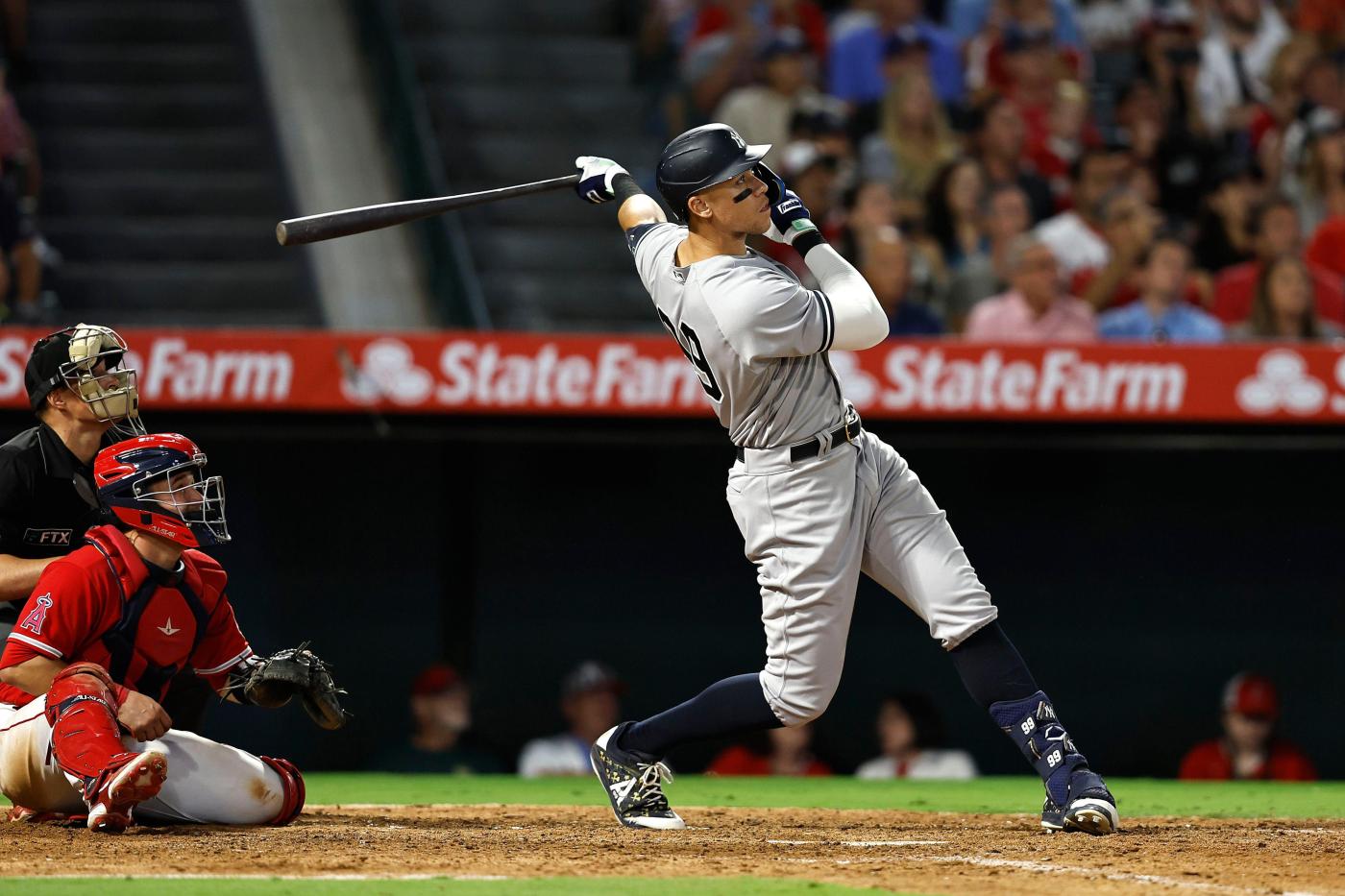 ANAHEIM — When he got a chance, Aaron Judge delivered. The Yankee slugger barreled up an 81-mile-an-hour curveball to dead center field for his 50th home run of the season on Monday night at Angel Stadium. The shot cut into the Angels lead, but could not save the Yankees, who lost 4-3.

The 434-foot home run came off of Angels’ reliever Ryan Tepera in the eighth inning. With 33 games to go, Judge is only 11 home runs away from the American League and Yankee record of 61 set by Roger Maris in 1961.

It is just the 47th 50-home run season in major league history and Judge became just the 10th man in baseball history to hit 50 home runs in two seasons of his career. He hit 52 in his rookie year of 2017. He joins Babe Ruth, Mark McGwire and Sammy Sosa, who each did it four times, Alex Rodriguez (three times) and Jimmy Foxx, Ken Griffey Jr., Ralph Kiner, Mickey Mantle and Willie Mays who each had two 50-homer seasons.

It was the 10th 50-home run season for the Yankees with Ruth’s four, Mantle’s two, Maris’s record-setting 1961, and Alex Rodriguez one. Now Judge has done it twice.

“It’s been remarkable,” Yankees manager Aaron Boone said. “I was a young player in 1998 and played in the National League Central when  Sammy and McGuire were doing their thing down the stretch and we were playing them with the Reds all the time. So  I probably saw 59, 60 all those homers coming against us, too. So,  I got to see that and kind of the  circus of the excitement that went with that. And how big that was at the time for baseball.

“I think what Aaron’s doing this year is certainly in line with that,” Boone said. “And then I think when you add in the fact that you know how good of an all around player Aaron is too. He plays center centerfield for us, tremendous outfielder, robbing bases. He’s got a big hit after a big hit for us. It’s been remarkable.”

But Judge’s exciting run could not breathe life into this offense.

Judge was walked intentionally twice Monday night for only the second time in his career. The first time it happened was June 10 this season against the Cubs. As he gets closer to the record, Judge is getting fewer and fewer opportunities and with the Yankees heavy hitters struggling there is no reason for opponents to pitch to him.  Aside from Judge’s homer, the Yankees top five hitters had one other hit. They were a combined 2-for-17 on the night.

Anthony Rizzo, starting in the No.6 hole for the first time since 2013, hammered his first home run since Aug. 17 in the fourth inning, a 411-foot, solo shot to right field.

Rizzo’s second home run since coming back from the back issue gave the Yankees a brief 2-1 lead. With two on and one out in the third, DJ LeMahieu had brought in a run on a safety squeeze.

Frankie Montas allowed  four   earned runs on eight hits. He struck out six and did not walk a batter over six innings. Montas gave up a career high-tying three homers, including a go-ahead, two-run shot to Shohei Ohtani.

The right-hander dropped to 0-2 in five starts with the Yankees with a 7.01 ERA.

Montas gave up a lead off homer to Luis Rengifo in the second inning and after Rizzo briefly gave him the lead he gave up a game-tying home run to former Yankee Mike Ford. It was Ford’s first home run since May 22, 2021, when he was still with the Yankees.