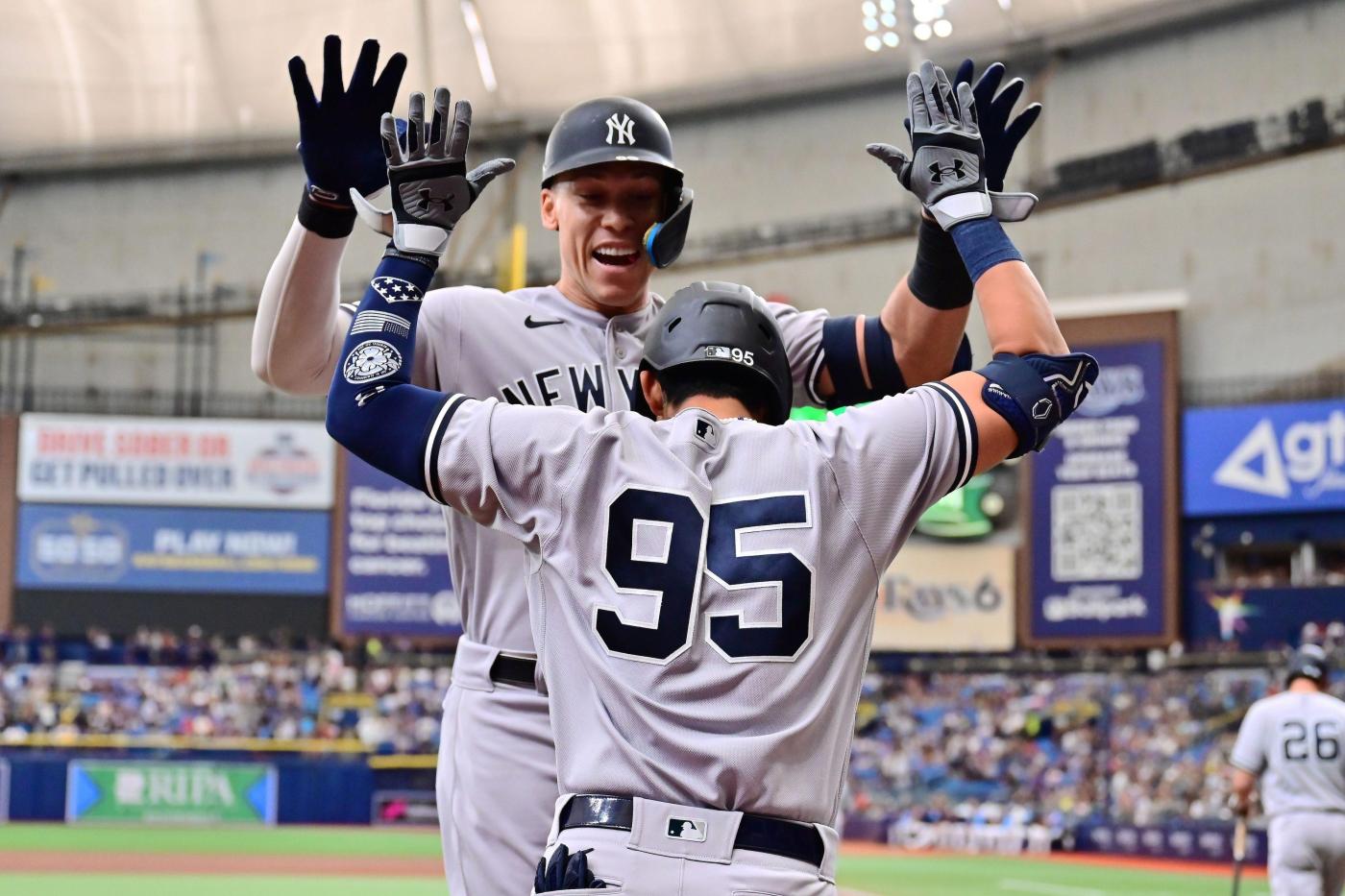 ST. PETERSBURG — Aaron Judge hit his 53rd home run of the season, doubled and scored another to basically carry his struggling Yankees to a win on Sunday. Frankie Montas had his best start with the Yankees as they beat the Rays 2-1 to avoid the sweep at Tropicana Field.

The win snapped a streak of three straight losses for the Yankees (80-54) , who lost the series on Saturday. They finished this road trip 4-6 and now head to New York to play four games against the Twins before another three game series against the Rays (74-58) in the Bronx. They leave with a five-game lead over the Rays in the American League East.

Judge set the example of winning at-bats on the very first pitch of the game. He crushed it for a 450-foot home run into the second deck in left field. It was his major league-leading 53rd homer of the season and a personal career high. It surpassed his rookie season of 52 homers.

Through July31, the Yankees were averaging a major league-leading 5.35  runs per game. In the 31 games since Aug. 1, they are averaging 3.01 per game, which ranks in the bottom five of the majors in that span. Since the All-Star break, the Yankees have scored one run or less in 10 of 42 games. They were held to a run or less just 14 times in their first 92 games.

In the seventh, the Yankees did add on when Judge led off with a double and Oswaldo Cabrera, hitting clean-up in his 17th major league game, got him in on a sacrifice fly. The Yankees had a chance to do more damage, but Giancarlo Stanton popped up and Josh Donaldson was struck out looking on three straight pitches.

Montas gave the Yankees a chance.

But this road trip that has been brutal wouldn’t end easily.

Clay Holmes allowed the Rays’ run in the ninth after giving up a leadoff double to David Peralta and an RBI-single to pinch hitter Francisco Mejia. Jonathan Aranda hit a two-out double to move Mejia to third. Holmes fell behind Yandy Diaz 2-0 and battled back to strike him out looking.

The frustration of this long road trip and awful offense flowed Sunday. Josh Donaldson took steps toward the mound and had the benches clear after drawing a walk on a pitch that was high and inside in the second inning. The umpires warned both benches after that. Aaron Boone was ejected in the fifth when he came out to argue catchers’ interference call. He was already upset with the umpiring crew because he wanted a  crew chief review of a DJ LeMahieu pop up in the top of the inning. The Yankees wrongly believed that Rays catcher Christian Bethancourt had caught the ball off the netting behind home plate. It was a foot in front of the net and the umpires did review it, it was upheld. The umpires, however, used it as a challenge since they were sure of the call, costing the Yankees their challenge for the rest of the game.

It was Boone’s major-league leading seventh ejection this season, a career-high for him.