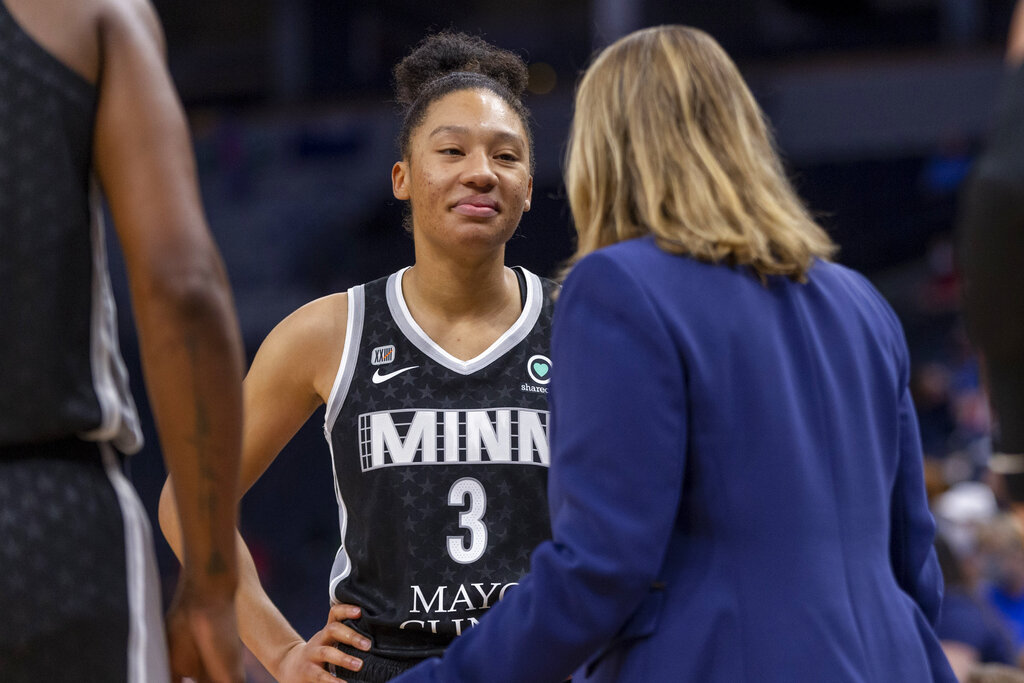 Aerial Powers made sure Minnesota didn’t let a late collapse get completed.

Powers scored seven straight points in the fourth quarter after a 20-point lead decreased to six, and the Lynx won 92-85 Thursday in Atlanta.

A defeat in that fashion would have been crushing for Minnesota’s dwindling playoff chances. With six games left, Minnesota is two games back of Phoenix for the final postseason position, although two teams are between the Lynx and Mercury.

“Coach was talking to us today at shootaround like this is the game that we need to win,” Powers said. “Right now, I’m not even looking at the standings, I’m just playing each game like it’s the last that we need a W because I don’t want to look too far in the future, I think if we do our job and get the wins that we need to get, it’ll all pan out.”

Minnesota cruised through much of the opening three quarters, leading 65-45 heading into the final frame.

But, like much of the season, nothing comes easy for the Lynx.

Atlanta had 45 points through three quarters. It scored 40 in the fourth, the most in any quarter against Minnesota this season. According to Lynx PR, it’s the sixth time in WNBA history a team has scored that much in one quarter.

The Dream got out and ran more. They also drew numerous Lynx fouls to get in the bonus with more than six minutes left.

Tiffany Hayes scored 18 of her 24 points in the final frame, and the Dream quickly got within 10.

“I just didn’t think we brought the energy necessary to close the game out in a really positive way,” coach Cheryl Reeve said. “They started playing some zone and got a little energy off of that, but we were able to grab the momentum back with Aerial Powers’ clutch, clutch offense.”

With the lead cut to six, Powers scored on a jumper, a 3-pointer and another jumper in a 76-second span to lift the lead to 13 with 4:02 to play.

“Hayes hit a 3-pointer in the corner and kind of stared at me and I kind of felt like, ‘OK, hold on.’ I don’t know who she thinks she is, and then I just kind of went off,” Powers said. “Sylvia (Fowles) gave me a few picks that had me wide open.”

Powers finished with a game-high 25 points as the Lynx ended a three-game slide.

“We know she can get to the rim, but just telling her to slow down, making sure she knows she don’t have to do everything on her own,” Fowles said. “She’s better when she has movement, so I was setting screens for her.”

Back in the starting lineup after missing one game with a right knee injury, Fowles was strong inside with 12 points and 14 rebounds, her 11th double-double this season and 99th in a Lynx uniform. Moriah Jefferson scored 14 and added seven assists, although she turned the ball over eight times.

Minnesota shot 55.6 percent from the field; Atlanta 38.6 percent. Minnesota is 141-6 since 2011 when holding an opponent under 40-percent shooting.

Bridget Carleton came off the bench to provide an early lift, scoring eight points in a 14-2 Lynx run for a 32-18 lead early in the second quarter. The spurt was part of a 29-8 Minnesota run that put the Lynx up by 23 late in the opening half.

“I’d like to finish the game better, but we played well,” Reeve said. “We played well in this game. I thought we defended our (rears) off. … They like to run and we made it very difficult for them. That’s why we were disappointing in our fouling. We did a really good job on their half-court offense.”