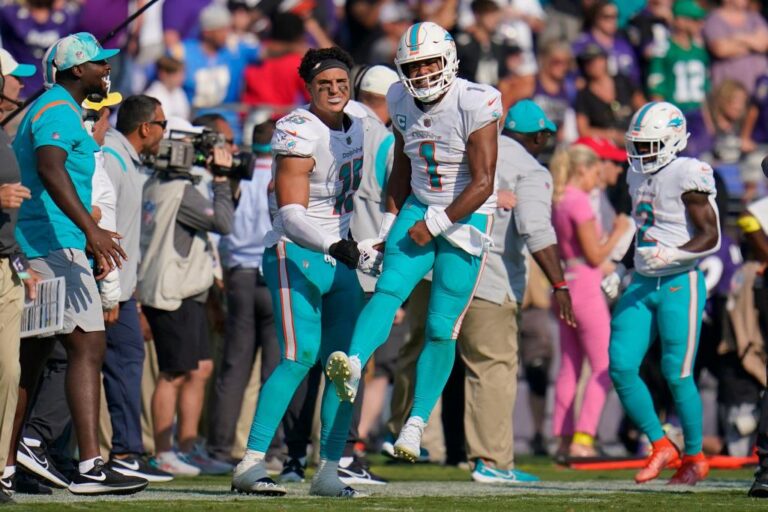 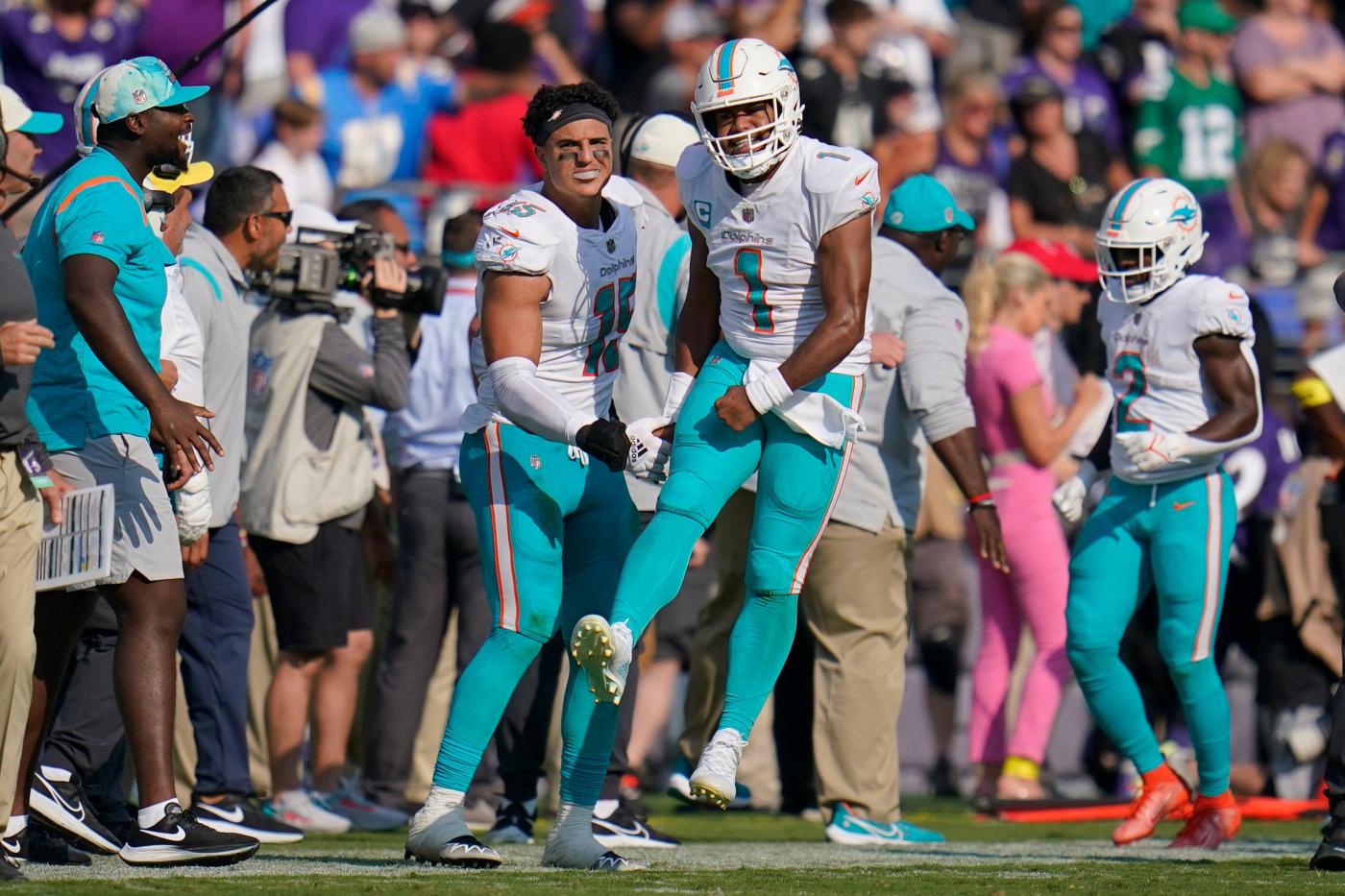 Tua Tagovailoa’s T-shirt after Miami Dolphins practice one day this week read: “I wish it were hotter.”

First-year head coach Mike McDaniel uses the phrase often to remind his team they have to embrace Florida’s sweltering, humid conditions – and that their opponents can’t.

But it doesn’t get any hotter than Tagovailoa’s left arm entering Sunday’s battle of AFC East undefeateds with the Super Bowl favorite Buffalo Bills.

“Individual success is only done within team success,” the humble Hawaiian said at his weekly press conference.

The lefty QB leads the NFL with 739 passing yards through two weeks. And he is tied for the most TD passes with seven. Most of that is courtesy of a 469-yard, six-touchdown eruption in last week’s 42-38 road comeback win over the Baltimore Ravens.

The exclamation points were 48-yard and 60-yard TD passes to Tyreek Hill in the fourth quarter that smashed the stereotype of Tagovailoa as a checkdown king to smithereens.

“I think what Mike does with our offense is he complements everyone’s talents, everyone’s ability within the offense,” Tagovailoa said. “For instance, if I’m good with RPOs [run-pass options], he’ll find some way to get that implemented. If someone’s good at running a certain route, we’ll find ways to get him the ball within that route a few different ways. Things like

Desperation played a role in the Dolphins’ offensive explosion. They trailed 35-14 entering the fourth quarter and had no choice but to chuck it downfield.

And the Baltimore Ravens’ defense inexplicably allowed gaps downfield for those speedsters to exploit.

“That’s a different kind of speed,” one NFL defensive back told the News this week of Hill, the longtime Kansas City Chief terror.

Miami’s early offensive outburst is significant for two reasons. First, ownership chose GM Chris Grier and Tagovailoa over fired former coach Brian Flores. So everything is riding on this QB working out.

More immediately, though, the Dolphins suddenly have a golden opportunity to assert themselves atop the AFC East if they can take down Josh Allen’s visiting Bills at Hard Rock Stadium.

Buffalo just lost starting safety Micah Hyde for the season to a neck injury. Plus they’ll be without starting corner Dane Jackson and starting D-lineman Ed Oliver on Sunday.

That said, Miami has lost an unthinkable seven straight games to the Bills dating back to a 21-17 win on Dec. 2, 2018. That is the only time they’ve beaten Allen head to head, in his rookie year.

And the Dolphins refused to get ahead of themselves this week, because they know the Bills have outscored the L.A. Rams and Titans 72-17 through two weeks, with only three punts.

“You look at their opening game, they beat the Super Bowl champions of last year, and they didn’t just beat ‘em; it was by a lot,” Tagovailoa said. “The next team they played, really good team, they beat them by a lot.”

“He’s steadily become one of the best players in the National Football League,” McDaniel said of Allen. “Easily could argue he’s the best one … You’ll never, I don’t think, see him stopped, necessarily. It’s about minimizing and containing.

High praise. But now the Dolphins have firepower of their own, which makes Sunday’s 1 p.m. kickoff the game of the week in the NFL.

Increasingly off-the-rails Dallas Cowboys owner Jerry Jones invited a quarterback controversy on his own roster this week between backup Cooper Rush, who is starting Monday night against the Giants at MetLife Stadium, and injured starter Dak Prescott.

“Wouldn’t it be something if you had a dilemma as to which way you go?” Jones told reporters in Dallas. “You do that if he gets 10 wins. Same thing that happened with Prescott [in 2016]. I think like that. Of course I would [want that]. If he comes in and played as well as Prescott played, rush – played that well over these next games ahead – I’d walk to New York to get that.”

Rush, a former Giant, said he and Prescott “got a good laugh” out of Jones’ wild comments.

”I definitely don’t dream as big as Jerry. I just want to keep winning,” Rush said. “I think he just wants to win games and that’s what we all want to do.”

Head coach Mike McCarthy, who must feel like he’s playing whack-a-mole with unnecessary drama coaching Jones’ team, told 105.3 The Fan: “Dak is our quarterback, and we want Cooper to be as successful as possible. I think it stops right there.”

Glad that’s settled – at least until Jones talks next week.

Sunday’s game in Nashville between the Las Vegas Raiders (0-2) and Tennessee Titans (0-2) will be a desperate battle between two teams with high expectations on the precipice of disaster in 2022. Mike Vrabel’s Titans have lost left tackle Taylor Lewan for the season, so Raiders pass rusher Chandler Jones needs to have a big day. Josh McDaniels’ Raiders are the only 0-2 team in the AFC West. They have to get right quickly after a gut-punch loss to the Arizona Cardinals in Week 2. The Titans, last year’s AFC No. 1 seed, could end up being the most disappointing team in the league this season if their trajectory continues.

There is also a lot of early pressure on Denver Broncos first-year head coach Nathaniel Hackett, who will be on the Sunday Night Football national stage this week hosting Jimmy Garoppolo’s San Francisco 49ers (1-1). Hackett’s game management was so bad in a narrow Week 2 win over the Houston Texans that the Broncos’ home crowd was counting down the play clock when Denver was on offense to avoid more delay of game penalties or mismanagement.

Hackett is a players’ coach who is well-liked, but his season has had the kind of ricky start that could signal a one-and-done if it doesn’t get straightened out. Denver (1-1) could use a little help from supposedly elite QB Russell Wilson, too.

Carson Wentz’s Washington Commanders (1-1) hosts his former Philadelphia Eagles (2-0) team in a division battle that drips with intrigue and will have major ramifications on the early NFC East standings.

Beasley is going to help Tom Brady in a major way as the Bucs (2-0) host the Green Bay Packers (1-1) … There are six undefeated teams remaining after two weeks: the Bills, Dolphins, Eagles, Bucs, Kansas City Chiefs and Giants – just as everyone expected.

“I think at this point if I went to take a leak during practice, I’d end up on the report.” – oft-injured Panthers RB Christian McCaffrey on his ‘ankle stiffness’ on the Week 3 injury report