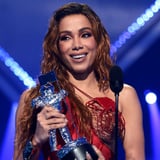 Anitta made history on Aug. 28 at the MTV VMAs. Following a performance of her hit song “Envolver” on Sunday, the artist accepted the best Latin award, presented by Ashley Graham. The “La Loto” singer’s win marks the first time a Brazilian artist has taken home the best Latin award in the award show’s 38-year history. Past winners include Aventura in 2010, Daddy Yankee in 2013, Rosalía and J Balvin in 2019, Maluma in 2020, and more. In shock over her win, Anitta took a few moments to compose herself as fans cheered her on in congratulations. “I was born and raised in the ghetto of Brazil, and . . .