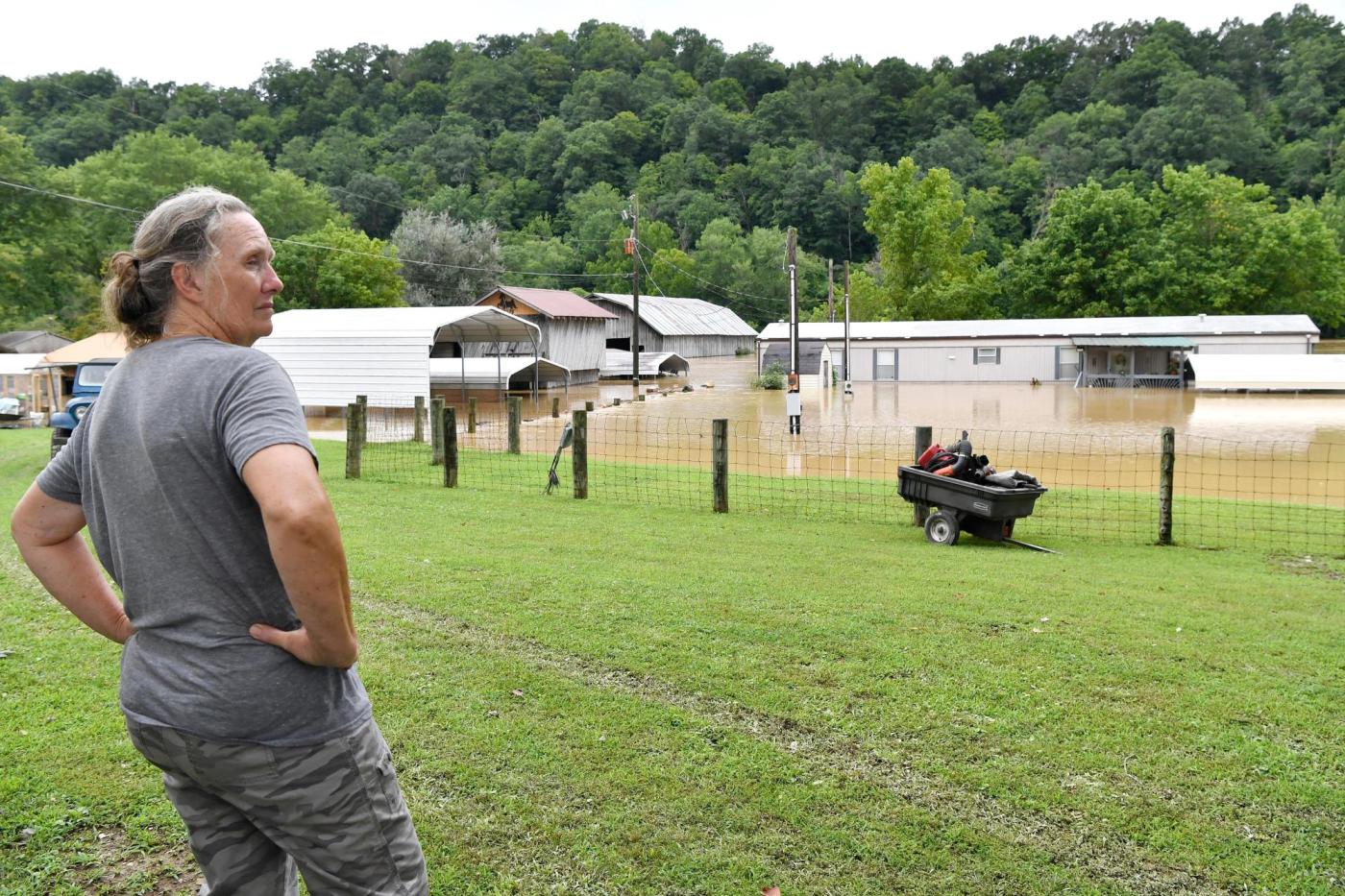 By DYLAN LOVAN and BRUCE SCHREINER

JACKSON, Ky. (AP) — Trapped homeowners swam to safety and others were rescued by boat as record flash flooding killed at least 16 people in eastern Kentucky and swamped entire Appalachian towns, prompting a frenzied search for survivors through some of the poorest communities in America.

Heavy rain continued to pound the region Friday and authorities warned the death toll would likely grow sharply. Some waterways were not expected to crest until Saturday.

It’s the latest in a string of catastrophic deluges that have hammered parts of the U.S. this summer, including St. Louis earlier this week and again on Friday. Scientists warn that climate change is making weather disasters more common.

Water poured down hillsides and into Appalachian valleys and hollows, where it swelled creeks and streams that course through small towns. The torrent engulfed homes and businesses, trashed vehicles and crunched debris against bridges. Mudslides marooned some people on steep slopes.

Rescue teams backed by the National Guard used helicopters and boats to search for the missing but some areas were still inaccessible. Kentucky Gov. Andy Beshear said the death toll was “going to get a lot higher.”

Rachel Patton said floodwaters filled her Floyd County home so quickly that her mother, who is on oxygen, had to be evacuated on a door that was floated across the high water. Patton’s voice faltered as she described their harrowing escape.

“We had to swim out and it was cold. It was over my head so it was, it was scary,” she told WCHS TV.

Beshear told The Associated Press that children were among the victims, and that the death toll could more than double as rescue teams searched stricken areas. The deaths happened in four eastern Kentucky counties, he said.

“There are hundreds of families that have lost everything,” Beshear said. “And many of these families didn’t have much to begin with. And so it hurts even more. But we’re going to be there for them.”

At least 33,000 utility customers were without power and the flooding extended into western Virginia and southern West Virginia, across a region where poverty is endemic.

Extreme rain events have become more common as climate change bakes the planet and alters weather patterns, according to scientists. That’s a growing challenge to government officials during disasters, because models used by forecasters to predict storm impacts are in part based on past events and can’t keep up with increasingly devastating flash floods, hurricanes and heat waves.

A day before the floods hit Appalachia, the National Weather Service had said Wednesday that there was a “slight to moderate risk of flash flooding” across the region for Thursday and Thursday night.

The deluge in Appalachia came two days after record rains around St. Louis dropped more than 12 inches (31 centimeters) in some areas and killed at least two people. Last month, heavy rain falling on mountain snow in Yellowstone National Park triggered historic flooding and the evacuation of more than 10,000 people and ravaged areas of Montana. In both instances, the amount of rain and flooding far exceeded what forecasters predicted.

The water was so swift that some people trapped in their homes couldn’t be immediately reached, said Floyd County Judge-Executive Robbie Williams.

Just to the west in hard-hit Perry Count, authorities said some people remained unaccounted for and almost everyone in the area had suffered some sort of damage.

“We’ve still got a lot of searching to do,” said Jerry Stacy, the emergency management director in Perry County. “We still have missing people.”

Determining the number of people unaccounted for is tough with cell service and electricity out across the disaster area, he said: “This is so widespread, it’s a challenge on even local officials to put that number together.”

More than 290 people have sought shelter, Beshear said. He deployed National Guard soldiers to the hardest-hit areas. Three parks set up shelters, and with property damage so extensive, the governor opened an online portal for donations to the victims. President Joe Biden called to express his support for what will be a lengthy recovery effort, Beshear said, predicting it will take more than a year to fully rebuild.

Biden also declared a federal disaster to direct relief money to more than a dozen Kentucky counties, and the Federal Emergency Management Agency appointed an officer to coordinate the recovery. FEMA Administrator Deanne Criswell joined Beshear at a briefing.

“We’re committed to bringing whatever resources are necessary to support the life-saving efforts as well as the ongoing recovery efforts,” Criswell said.

Even the governor had problems reaching the devastation. His initial plans to tour the disaster area on Friday were postponed because conditions at an airport where they planned to land were unsafe. He got a look at the flooding later in the day aboard a helicopter. He tweeted that “the situation is even more devastating to see firsthand” and said it will be “a long road to recovery.”

Beshear said portions of at least 28 state roads in Kentucky are blocked due to flooding or mudslides. Rescue crews also worked in Virginia and West Virginia to reach people in places where roads weren’t passable. Gov. Jim Justice declared a state of emergency for six counties in West Virginia where the flooding downed trees, power outages and blocked roads. Gov. Glenn Youngkin also made an emergency declaration, enabling Virginia to mobilize resources across flooded areas of southwest Virginia.

“With more rainfall forecasted over the next few days, we want to lean forward in providing as many resources possible to assist those affected,” Youngkin said in a statement.

The National Weather Service said another storm front adding misery to flood victims in St. Louis on Friday could bring more thunderstorms to the Appalachians, where flash flooding remained possible through Friday evening in places across the region.

Brandon Bonds, a weather service meteorologist in Jackson, Kentucky, said some places could see more rain Friday afternoon and begin to dry out on Saturday “before things pick back up Sunday and into next week.”

The hardest hit areas of eastern Kentucky received between 8 and 10 1/2 inches (20-27 centimeters) over a 48-hour period ending Thursday, Bonds said. Some areas got more rain overnight, including Martin County, which was pounded with another 3 inches (7.6 centimeters) or so leading to the new flood warning.

The North Fork of the Kentucky River rose to broke records in at least two places. A river gauge recorded 20.9 feet (6.4 meters) in Whitesburg, more than 6 feet (1.8 meters) over the previous record. The river crested at a record 43.47 feet (13.25 meters) in Jackson, Bonds said.

In Whitesburg, Kentucky, floodwaters seeped into Appalshop, an arts and education center renowned for promoting and preserving the region’s history and culture.

“We’re not sure exactly the full damage because we haven’t been able to safely go into the building or really get too close to it,” said Meredith Scalos, its communications director. “We do know that some of our archival materials have flooded out of the building into Whitesburg streets.”