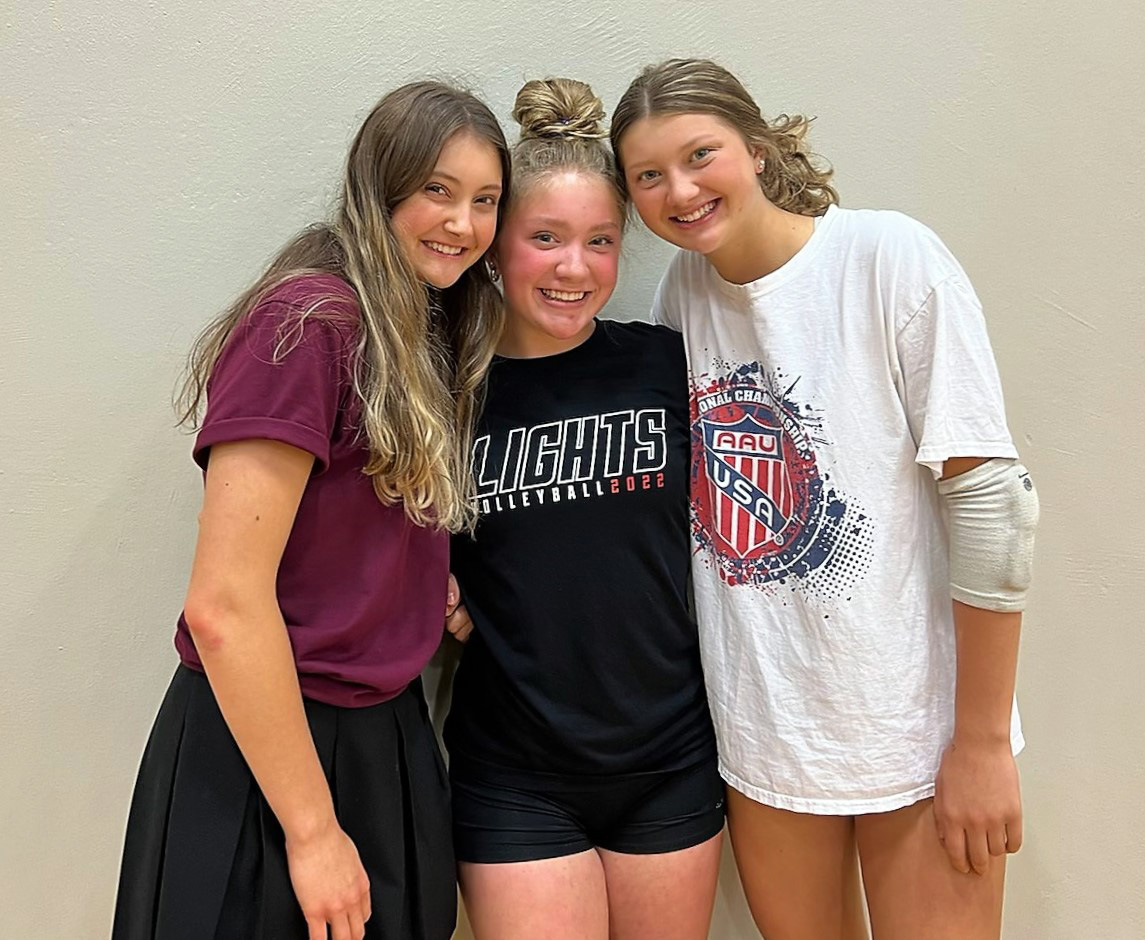 A trip to the Ball household requires a keen eye and fast reflexes, because at any moment a volleyball may go flying in your direction.

At least that’s how Nova Classical Academy senior Ally Ball, one of four sisters in the volleyball-crazed family, tells it.

The family room regularly becomes the warm-up area before big matches or tryouts, with the sisters peppering back and forth. Their dad, Jason, joins in from time to time as well. No piece of furniture is safe.

“You get the occasional hitting of the light or TV,” Ally admitted with a smile.

That’s the way it always has been. The sisters — Elisia, Ally, Sam and Ava — have been playing together since they were young. Elisia, the oldest and now sophomore in college, first made the Nova Classical varsity team as an eighth grader in 2015. Every year since, at least one Ball sister has been on the team.

Now, with fraternal twins Ally and Sam in their senior years at Nova and Ava rapidly developing as a sophomore, the sisters are hoping to do the one thing their family and Nova Classical have yet to achieve — make the state tournament.

Currently 13-0 and the No. 2-ranked team in Class 2A, they’re off to a good start. The team has dropped just two sets this season and has yet to be pushed to a fifth set. Ava and Sam, both outside hitters, rank first and fourth in total kills among Class 2A players. Ally, a setter, leads the state in assists.

The dominance is noteworthy but not unordinary. In 2021, the team lost five matches all year, with each of the Ball sisters amongst the top performers in the state. They were within one set of a state tournament berth, up 2-0 in the section championship match against Mounds Park Academy, before MPA rattled off three straight sets to win that coveted trip to state.

It’s still a sore spot for the Nova Classical team, but one that the sisters believe has made them better. There were no seniors on last year’s team and everyone has returned to make another push. So while the goal is the state tournament, you won’t find anyone looking too far ahead.

“There’s definitely more pressure on us. We feel it but we can’t worry about it,” Sam said. “We aren’t going to get ahead of ourselves.”

That mindset is led by Sam and Ally, the de facto captains of the team. They learned their leadership strategies from watching Elisia, they said. It’s a common thread for the family. The sisters’ mom, Abby, played volleyball in high school and got the girls interested. Sam and Ally followed Elisia’s lead with Ava following close behind them, picking up tidbits on the way.

“I watched the game and my sisters a lot first, more than I played,” Ava said. “So I picked up a lot of things.”

Head coach Tom Dobbs sees it in the angles Ava and Sam take or the pace Ally plays with. He describes them all as “students of the game.”

Dobbs knows the family well. He first coached Elisia in club volleyball well before high school and remembers Ava as a toddler. The family was a part of the reason why he took the head coaching job at the high school three years ago.

He has observed their connection on the floor, too. It includes some sibling bickering, but the girls say they’ve tried to limit that, particularly when they’re on the court together. When they’re off the court, they have more freedom to be direct and honest.

“You know if they get offended it won’t be for long,” Sam said.

But the sisters believe they have that dynamic with the entire team. They’ve known Dobbs for much of their life and have played club and school volleyball for years with their teammates.

It’s a recipe they hope pushes them through to the state tournament. And they’ll get their biggest indication of where they stand against top teams during a Class 2A showcase tournament this weekend. Nine of the top-10 teams in the state will compete.

“It will be good to get punched a little bit and see if we can punch back,” Dobbs said.

The team is confident it can, after playing many of the state’s top teams in summer scrimmages and from learning from last year’s section loss. For the Ball sisters in particular, the year carries extra weight, as the final season with more than one sister on the team.

“It’s a bittersweet moment because when sections come, it could be the last time we play together,” Ava said. “But we hope it’s not.”