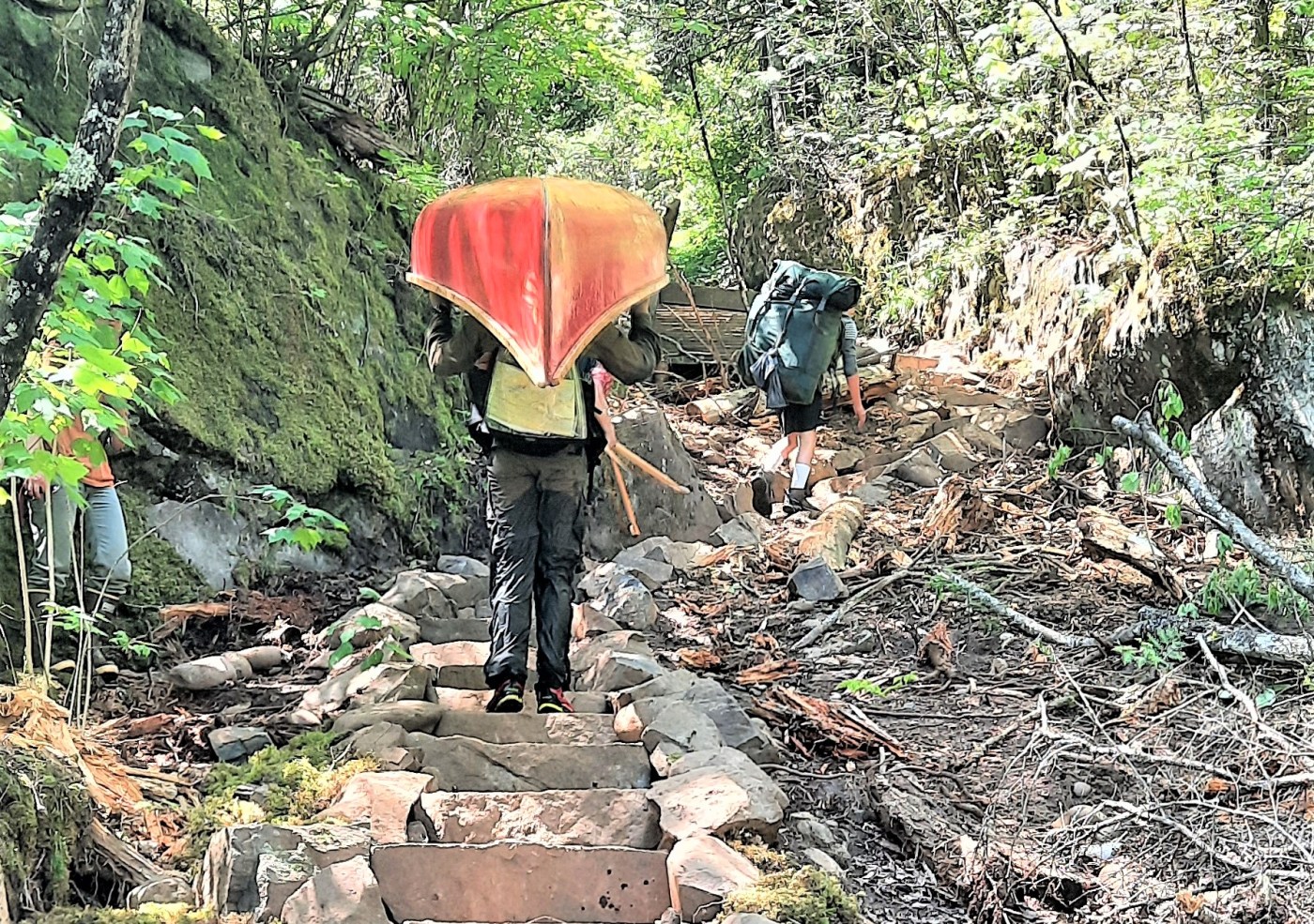 BOUNDARY WATERS — The famed Stairway Portage got a makeover this summer when the steep, wooden steps were replaced with native stone.

The portage, one of the busiest in the million-acre federal wilderness, was starting to fall apart and Boundary Waters Canoe Area Wilderness officials decided a more permanent solution was needed.

“This is at least the third and maybe the fourth time since I’ve been around that the steps were failing and had to be replaced. So it made sense to try to do something more sustainable,’’ said Cathleen Quinn, recreation and wilderness specialist with the Superior National Forest’s Gunflint District. “I’m thinking this will be the last time we’ll have to do this for a long, long time.”

The portage that links Duncan and Rose lakes had 122 wooden steps and now has 78 stone steps, with each piece mined from nearby sources, moved and installed by hand. Federal wilderness regulations didn’t allow the use of wheels or power tools.

“We got the rock from six or seven quarry sites right around the portage. … There’s a lot of rock in that area,” said Willie Bittner, owner of Great Lakes Trailbuilders. The company, based in LaCrosse, Wisconsin, specializes in low-impact, sustainable trails.

Bittner, along with a five-man crew from Conservation Corps Minnesota and Iowa, followed all the same rules as campers and Forest Service staff in the BWCAW.

Each step weighed as much as 200 pounds and had to be cut using chisels and sledgehammers and then moved into place and set using only human power. “We used plastic ice fishing sleds. … And using the old wooden stairs as sort of a rock slide,” Bittner noted.

The crushed rock essential for the step’s foundation was also produced on-site, by hand. They found smaller stones and took turns swinging a 10-pound sledgehammer to make their own gravel.

The crew boated their gear in and camped on the north side of Duncan Lake and then paddled to work every morning. They put in more than 2,000 hours of labor combined. Bittner was there for the entire 40-day project that finished in July while his crew had a couple four-day breaks.

“My specialty is dry-stone masonry, so this was really nothing new for me. … But it was an interesting spot to try to work in,’’ said Bittner. “I enjoy passing on my knowledge of stone to the next generation of trailbuilders.”

The portage is one of the busiest spots in the wilderness, Quinn said, used by both day-use visitors canoeing in from nearby lakes just outside the BWCAW and by overnight campers heading deeper into the wilderness. It’s even a spot people go to in winter, she said.

“It’s sort of an iconic spot, really. It’s the Stairway Portage. … It’s a badge of honor for some people to say they did it,” Quinn said. “And it’s true — it’s not an easy feat to make that portage carrying gear or a canoe.”

Quinn said it’s unknown if Native people or voyageurs used the same route centuries ago, but there are historical records of the portage being used as far back as the early 1900s, when local logs were felled to provide a foothold.

The spot also is popular because of the small but scenic waterfall along the portage route.

“It’s kind of a forced portage. Most portages follow the easiest routes between lakes, usually along low creeks, because that makes sense. … And most follow the wilderness principle of not having any structures,” Quinn said. “But, in this case, the stone just fits much better in the wilderness compared to dimensional lumber. And it’s going to make it easier for people.”

The portage project cost about $100,000 and was funded in part by national forest timber sales revenue and money from the Great American Outdoors Act approved in 2020. Deeper into the wilderness, another 30 wooden steps on the portage between Flying and Gotter lakes were also replaced with 24 stone steps.

The portage work was delayed last fall due to the number of wildfires in the region, then was delayed again last spring due to the late ice-out on BWCAW lakes. Construction during the summer had to allow for safe passage by anyone who wanted to cross the portage, which meant the crew had to stop work often and help campers move canoes and packs up or down the steep hill.

“On one day we had 100 people come through in 22 canoes,” Bittner said. “We spent a lot of time moving gear over the portage. … But it worked out pretty well.”

Quinn said there is one more set of wooden steps in the BWCAW, between East Bearskin and Moon lakes, that is a candidate for replacement with stone.

“We try not to have permanent structures like stairs in the wilderness. But in these cases, it really is for resource protection” against erosion, Quinn noted. “And if it can make the experience a little better for visitors, that’s great, too.”

The BWCAW is the most heavily used wilderness in the country with about 150,000 visitors annually. That number jumped to 165,000 in 2020 with heavier use during the peak of the pandemic and the closed Canadian border.