Just months ago, the Chinese yuan was reigning supreme as emerging markets’ own haven asset, shielding investors from the turbulence of war and runaway inflation.

Today, it’s turning into a threat.

As growth sputters in the world’s second-biggest economy, its currency has tumbled to a two-year low and looks set for further losses. That’s pushing Goldman Sachs Group Inc. to SEB AB to predict shock waves not just in China’s neighbourhood but as far away as Africa and Latin America — with a cheaper yuan hitting other nations’ export appeal and sparking competitive devaluations.

“With the yuan set to weaken further, other emerging markets will face downward pressure on their currencies,” said Per Hammarlund, the chief emerging markets strategist at Skandinaviska Enskilda Banken. “The impact will be felt the most by nations which compete directly with China on exports.” 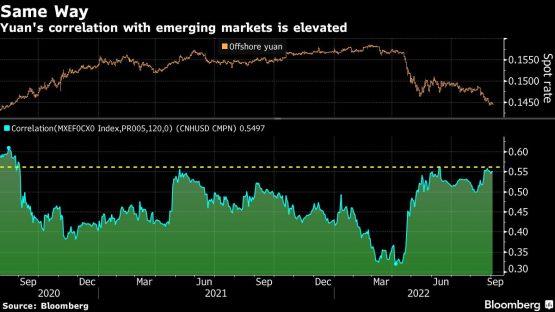 The yuan declined for a sixth consecutive month in August, capping the longest losing streak since the height of the US-led trade war in October 2018. It will fall even more and cross the psychological mark of 7 per dollar this year, banks including Societe Generale SA, Nomura Holdings Inc. and Bank of America Corp. say.

It’s a stunning reversal for a currency that stood out for its resilience at the outbreak of Russia’s war in Ukraine. In the days following the Feb. 24 invasion, the yuan was the only emerging-market exchange rate to avoid a decline, trading at an almost four-year high against MSCI Inc.’s benchmark index. Global demand for it deepened — from countries like Russia and Saudi Arabia looking to reduce their reliance on the dollar to US bond investors seeking new havens.

But in the past month, sentiment has reversed. China’s Zero Covid policy, ballooning property crisis and growth slowdown are fueling an exodus of foreign capital, even as domestic inflationary expectations surge. China’s central bank has sought to push back against the depreciation. It set the yuan fixing at a stronger-than-expected level for the ninth straight session, however the dollar’s strength is undermining such defensive tactics.

Data releases scheduled for this week don’t look promising either. They may show declines in China’s foreign reserves and export growth, besides a deceleration in services.

Joined at the hip

A weaker yuan has wider repercussions for emerging markets, which have endured two years of elevated inflation, jitters over the Federal Reserve’s monetary tightening and the prospect of recession in key western markets. The Chinese currency, with its 30% weight in the MSCI Emerging Markets Currency Index, is pushing the gauge to the worst year since 2015. In fact, the offshore yuan’s 120-day rolling correlation with the emerging world hovers near the highest level in two years, underscoring its impact. Goldman and Societe Generale say the weaker yuan could pull the South Korean won, Taiwanese dollar, Thai baht, Malaysian ringgit and South African rand down with it. SEB sees the Mexican peso, Hungarian forint, Romanian leu and Turkish lira as the most vulnerable.

“Trade and financial linkages have significantly strengthened between China and other emerging markets, prominently over the past decade,” said Phoenix Kalen, the head of research at Societe Generale. “These deeply embedded relationships render the situation much more difficult for global emerging-market currencies to decouple from China.”