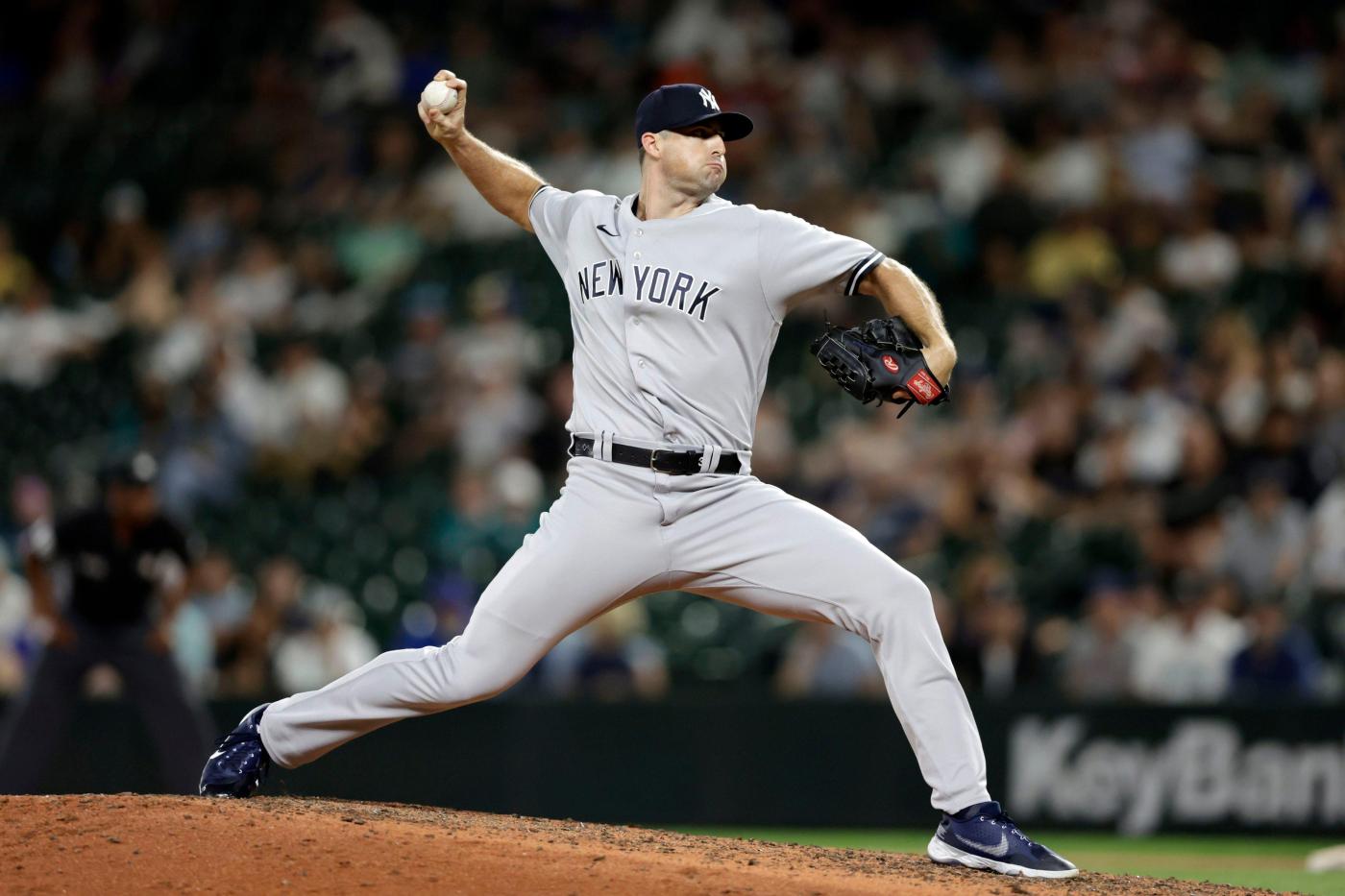 After two days of complete rest, Clay Holmes was ready to throw again. The struggling closer played catch in the outfield before Saturday’s game, but it’s a sign that he could be back as soon as he is eligible to come off the injured list at the end of the month.

Holmes said that the back tightness that put him on the IL feels better and he’s encouraged that the rest and treatments worked. Now, he’s trying to work on his delivery.

“I think it’s just to stay on top of things and pay attention to details and kind of really nail down some things,” Holmes said.

In his first 38 games this season, Holmes was unhittable. He pitched to a 0.46 ERA walking six in 39.1 innings pitched. Over his last 11 appearances, he has allowed 11 earned runs and walked 10 in 9.2 innings pitched.

The Yankees noticed during that slide, Holmes’ stance on the mound was too wide and he was crouching over too much. It was causing him to get “over rotational,” meaning he had to turn his trunk too much to get the ball going straight toward the plate. That, in turn, caused him to yank pitches which led to the increase in walks.

“That’s something we’re working on,” Holmes admitted. “I do feel like I was too rotational.”

And could that have contributed to the back issue?

“It’s possible,” Holmes said. “It could affect the back, it’s definitely something we’re looking out for.”

Getting Holmes back and back on track for the stretch run would be huge. When he returns, however, he will have to show that his sinker is back to being effective.

“Yeah, it’ll be fluid,” Yankees manager Aaron Boone said. “We want to get Clay right. When he’s right, we saw it obviously for the first three-plus months of the season, [he is] about as lights out as you can be. So we gotta get him to that point.

“First and foremost is getting [him] physically right. Hopefully, he can get through these next couple of days and we can get him back on the mound. The bottom line is he gets locked in with his delivery and commands a sinker the results should be quick to follow.”

Giancarlo Stanton began his rehab assignment with Double-A Somerset Saturday and the hope is that he could be back in the big league lineup next week when the Yankees head out West to face the A’s and Angels.

“He’ll probably get between three and five at-bats today and tomorrow,” Boone said. “Hopefully get through tonight, bounce back tomorrow and be in a good spot physically to do that. Hopefully, he gets some action on the bases as far as going first to third or whatever it may be just moving around like that.

Stanton will not play the field in his rehab assignment and not when he first returns to the Yankees either.

“When we first bring him back, I think it’ll be just DH. Similar to last year when we transitioned him to get out in the outfield,” Boone said. “We’ll have him build up to that on the fly as he’s DH-ing with us. That’s kind of the plan…. continuing that pregame work moving around the outfield and I think he’ll kind of let us know when we’re ready to make that step. But it is something that I want to get to at some point, but allow his body to tell us when that time is.”

Josh Donaldson was the latest Yankee to go down. The third baseman was scratched from the lineup 20 minutes before first pitch with a “stomach bug.” The switch allowed Estevan Florial to get a start with Boone moving Oswaldo Cabrera from right field to third base to cover Donaldson.