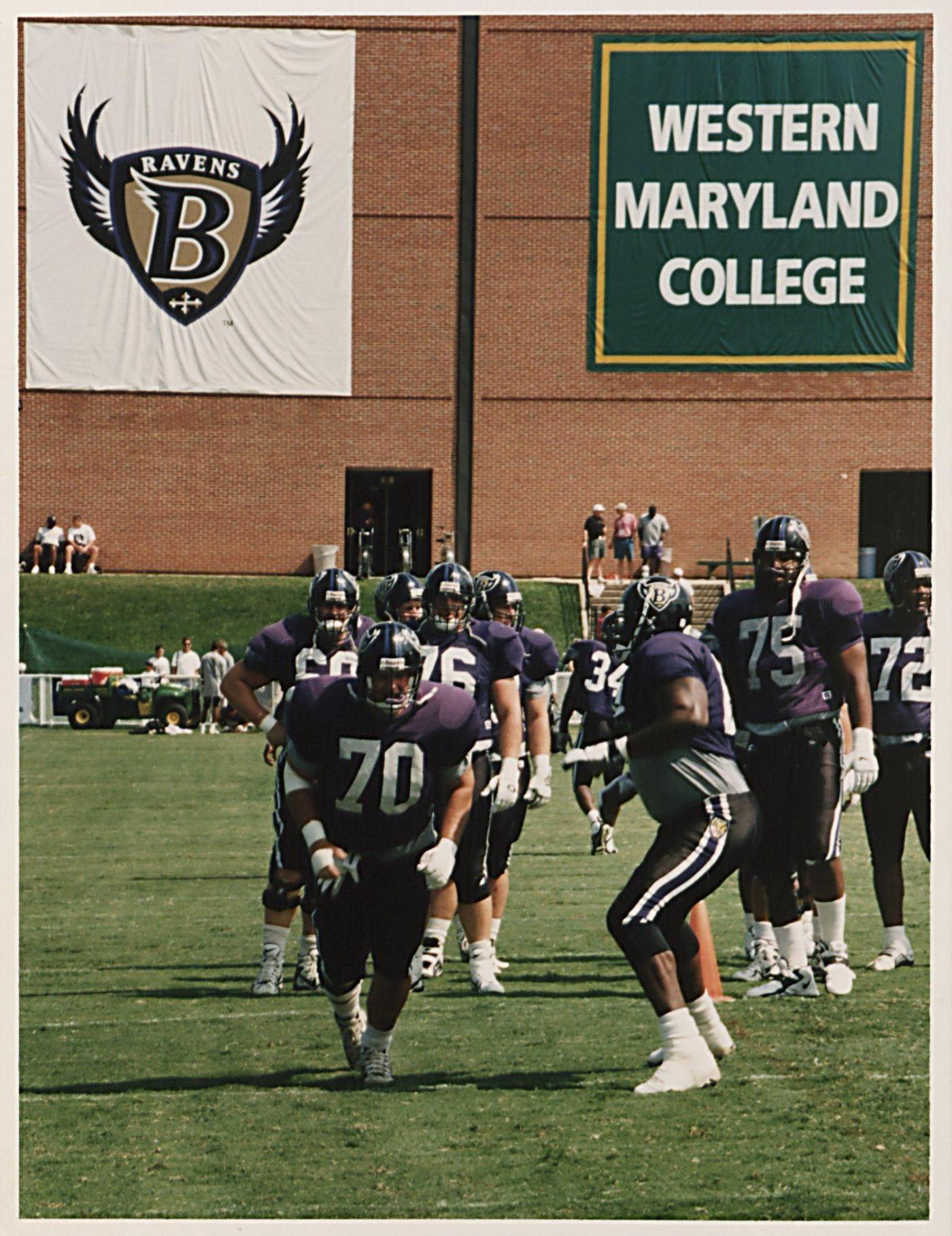 Are you ready for some football? It’s that time of year. NFL teams are in training camp preparing for another exciting season.

Carroll County has a long history of assisting Baltimore football teams training for their seasons. The Baltimore Colts spent 1949-50 and 1953 through 1971 in Westminster. The Colts were part of the All-American Football Conference from 1947-1950. Then the AAFC merged with the NFL in 1951 and the old Colts team was disbanded. Baltimore received an NFL expansion team in 1953. Following the departure of the Colts for Indianapolis in 1984, Baltimore became home to the Ravens in 1996, and they trained in Westminster from 1996 to 2011. The camps were once again held at Western Maryland College/McDaniel College, but over the years they changed dramatically.

In 1953, both the NFL and Americans’ interest in sports were very different than today. Sports used to be largely an in-person experience. Few games were televised. Revenue was much smaller. Players were paid significantly less and had to work in the off-season to support themselves and their families. They couldn’t train year-round.

As a result, training camps were needed to get players in shape for the season. They might last as long as seven weeks and there were six preseason games. Exercise and emphasis on nutrition were minimal compared to today. Now, almost every game is televised which generates high revenue. Professional football has become a huge business. Players are paid well and generally keep in shape year-round, making training camps shorter with fewer preseason games.

Colts players stayed in Western Maryland College dormitories that were not air conditioned. There were five showers for 50 players. Practice was hard – two per day. No player skipped for fear of losing a job. Ravens players, on the other hand, stayed in what was then the Best Western Motel with plenty of showers! They still have two practices a day at their Owings Mills facility, but those are shorter and there is much less contact. Players over 30 years old are given days off. Teams are trying to protect their investments, and players don’t want their seasons or even their careers ended because of preseason injuries.

Baltimore Colts training camps could be described as work hard during the day and have fun at night. According to several Baltimore Sun articles, nights were “a time for pulling boyish pranks in the dorms, sneaking out after the 11 p.m. curfew and forming lifelong friendships with some of the townies.” A couple of players even married local women.

There are also some famous stories. Art Donovan stopped in Harry’s Lunch on West Main Street one day and ate 25 hot dogs. Art and a couple other players snuck out after curfew one night and went to a bar in Silver Run, where some locals ribbed them a bit too much. Art and friends waited until the locals passed out drunk and proceeded to tie them to a tree.

Local fans looked forward to seeing their favorite players around Westminster – playing pool at Os and Ginny’s Tavern, attending mass at St. John Church, or just running into them on the street. The players appreciated being able to walk around without signing autographs, but it wasn’t pleasant for everybody. For the few African American players on the early teams, training camp was just making the best of a bad situation. Westminster in the 1950s was a microcosm of American society, and racism was common below the Mason-Dixon Line. While Black players were embraced at practice for autographs, they were ignored if they walked into town. Some public places were off limits.

Ravens training camps were quite different. Players mostly kept to themselves after practice. There are very few newspaper stories about them. Occasionally, some players would be spotted picking up fast food; they could only eat so much that was healthy.

Society also changed. In later years, it was easy to jump in your Cadillac Escalade and head down Routes 140 and 795 to enjoy what went on in Baltimore. Fans still came in droves when the Ravens were in town. It was estimated that 112,000 came in 2010. Local businesses appreciated the extra income because a training camp might add up to $3 million to the local economy.

The Colts and the Ravens got a lot of local attention, but few people know another NFL team had a presence in the county. The Rooney family, owners of the Pittsburgh Steelers, are horse racing enthusiasts and they love Maryland racetracks.

In the 1940s, they were looking for a local farm to winter their racehorses. Art Rooney purchased property between Woodbine and Winfield in 1948, naming it Shamrock Farm. Over time it transitioned to a thoroughbred breeding farm and still exists today. The story goes that the Steelers used to send players to the farm to get in shape for training camp. Slinging bales of hay was probably pretty effective in gaining strength and losing a few pounds during a Carroll County summer.

Details about the Steelers’ presence are sketchy and it is not known the years players came here or if any were well-known. I have only heard one name mentioned. To breed horses, you need to know when a mare is in heat. To determine that, the farm had an old gelding. He couldn’t do more than notice when a mare was in heat and show interest. His name was Lucky Bradshaw.

Austin Hewitt is a research volunteer at the Historical Society of Carroll County.