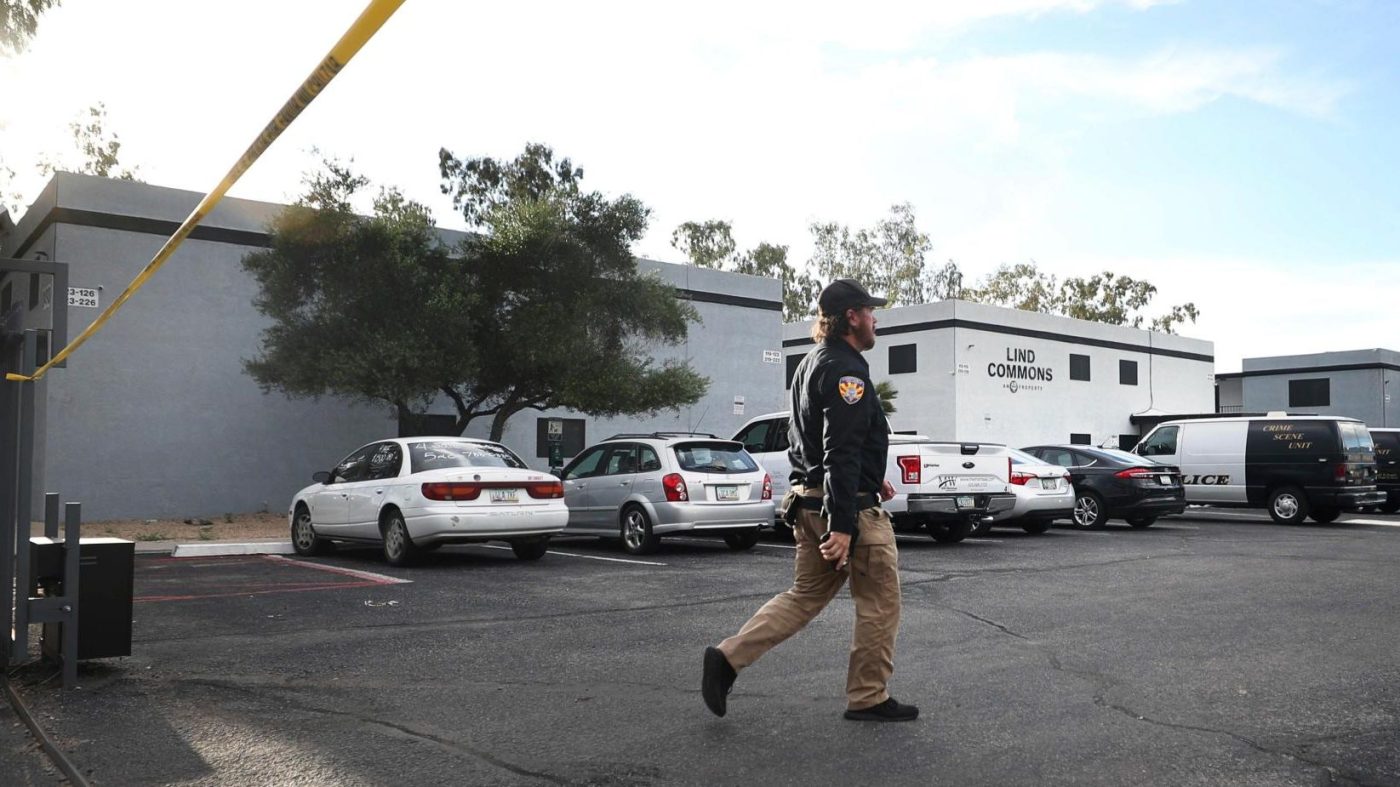 By JACQUES BILLEAUD and TERRY TANG

PHOENIX (AP) — An Arizona constable who got the job earlier this year when her predecessor quit over frustration about serving eviction notices was shot and killed while carrying out that same duty. The gunman, his neighbor and the manager of his apartment complex also died, authorities said.

The shooting happened just after 11 a.m. Thursday at the Lind Commons Apartments in Tucson. Constable Deborah Martinez-Garibay and Angela Fox-Heath, the complex manager, were attempting to serve an eviction notice on Gavin Lee Stansell when he opened fire, according to police.

Fox-Heath, 28, was found fatally hit. Responding officers found her in a courtyard.

A SWAT team went into Stansell’s apartment and located a wounded Martinez-Garibay, police said. She was pronounced dead at the scene.

They found Stansell, 24, dead from a self-inflicted gunshot wound.

A wider search of his home found Stansell had entered a neighboring unit and fatally shot Elijah Miranda, 25.

The Pima County Constables Office said staff were devastated by the killing of Martinez-Garibay, 43. She gave her life in service to the people of Arizona, the office said.

“We all know that the job of an Arizona Constable comes with risk, but we go about our business with caution and professionalism and treat all with whom we come in contact with respect and dignity,” the office said in a statement.

Few details have been released about the events leading up to the shooting. Local news outlets reported that an employee of the apartment complex was also killed in the shooting.

Residents at the apartment complex were evacuated but later let back into their homes, news outlets reported.

An eviction complaint filed on Aug. 15 by a landlord in Pima County Consolidated Justice Court indicated that Stansell had previously threatened violence.

The complaint said he or his guest had threatened and intimidated neighbors with a gun on July 27.

Stansell failed to appear at a hearing in the case set for Monday, court records said.

According to the records, a judge ruled that Stansell had breached his lease agreement, writing: “The evidence shows that defendant threatened another resident with a firearm and has otherwise disturbed the peace.”

Arizona Gov. Doug Ducey ordered flags fly at half-staff in all state buildings Friday in honor of the slain constable.

“The loss of Constable Deborah Martinez is felt across our state,” Ducey said in a news release. “Whether it was serving in the U.S. Army or carrying out her duties as a constable for Pima County, she dedicated her life to helping others and her community.”

Martinez-Garibay became a constable for Justice Precinct 8 earlier this year, Ducey said. She was a Tucson native “who will be remembered for the way she treated others with dignity and respect,” the governor said.

“It’s just unreal, for someone to do that to another person,” her husband, Gabriel Garibay, told the Tucson Sentinel on Thursday. “I’m still trying to put it together. It seems like it’s unreal, I’m still thinking that it’s a joke somewhere, but it’s just a way to describe it. I don’t know how to explain it.”

Around 6 p.m. Thursday, Martinez-Garibay’s body was escorted from the area by law enforcement officers, who formed a guard of honor. Motorcycle police and other law enforcement vehicles drove in a line with lights flashing.

Her Ford F-150 remained at the scene Thursday afternoon, with a small “Constable” sign on the door, the newspaper reported.

Constables are elected peace officers who serve civil or criminal papers for Pima Justice Court and several county agencies. They can also serve papers from courts outside the region.

Martinez-Garibay enlisted in the U.S. Army after the Sept. 11, 2001, terrorist attacks, and did multiple tours in Afghanistan before retiring after 16 years. After leaving the military, she volunteered at local nonprofits dedicated to veterans and their families, the governor’s news release said.

She was appointed constable after the previous one resigned.

“When I deal with the people that I have to evict, I understand that’s my responsibility, but they’re still people,” she said in March, according to the Arizona Daily Star. “Just giving some basic dignity and respect can go so far in helping these people rebuild their lives.”

Former Constable Kristen Randall had grown frustrated with having to serve people with eviction notices while not being able to help them stay in their homes.

“When a force for good can so easily be a force of pain and destruction, we should examine how this archaic position can better fit the needs of a changing community,” Randall said in her Feb. 13 resignation letter.

This is the latest incident pointing to the dangers of serving eviction notices. On Monday, an Oklahoma County Sheriff’s Office deputy was fatally shot and a second deputy was wounded while they attempted to serve eviction papers at a home near Oklahoma City, officials said.

Sheriff Tommie Johnson said the two deputies were serving “lock-out papers,” which is part of the eviction process, when one of the deputies went to the back door of the home and was shot. The second deputy was shot as he attempted to pull the first deputy to safety, Johnson said. A suspect in the Oklahoma shooting was taken into custody after leading law enforcement on a chase, officials said.

Evictions have been spiking nationwide in recent months now that early pandemic protections that kept millions of families housed have disappeared and rental assistance funds have dwindled.

Pima County courts, which include Tucson, have already seen 6,937 eviction filings this year, slightly more than the 6,899 filings registered during all of 2021. Eviction filings also have been surging in Arizona’s Maricopa County, home to Phoenix.