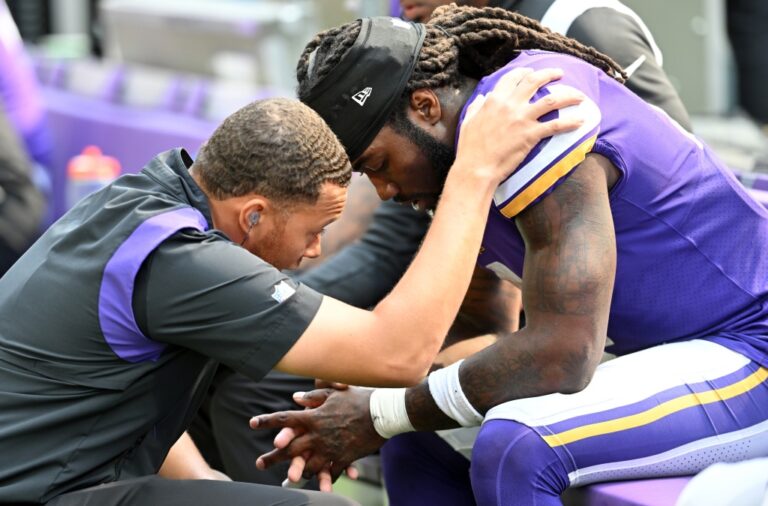 Running back Dalvin Cook missed one game last season after suffering a shoulder injury. Now, the Vikings will see if he can come back sooner this time.

Head coach Kevin O’Connell said Monday that Cook is “day-to-day” after he suffered a subluxed shoulder injury in Sunday’s 28-24 win over Detroit, which is a partial dislocation. O’Connell said after the game that Cook told him he planned to play next Sunday against New Orleans in London.

The injury is similar to the one Cook suffered Nov. 28, 2021 at San Francisco. He sat out a Dec. 5 game at Detroit before returning to rush for 205 yards on Dec. 5 against Pittsburgh while wearing a shoulder harness.

“He’s pretty sore (Monday), but obviously something he’s familiar with with his shoulder,’’ O’Connell said. “He’s tough, he’s rip and ready to try to get back out there and go, but we’ll take it day-to-day.”

Cook was hurt late in the third quarter on a play in which he lost a fumble. He rushed for 96 yards on 17 carries against the Lions.

O’Connell called the subluxed shoulder injury “kind of an in-and-out type of thing.” The injury is medically described as a “partial dislocation of the shoulder joint.”

“He’s dealt with that at times, but I think it’s something he’s prepared to try to paly with while also knowing we’re going to do what’s best for him to make sure we can have him as much as possible throughout the ins and outs of the rest of the season,” O’Connell said. “We’ll take it, it truly is a day-to-day thing, see how the management goes, but he wants to be out there with his teammates.”

O’Connell said Monday he has little doubt that safety Harrison Smith will return after sitting out against the Lions with a concussion suffered Sept. 19 at Philadelphia.

“Harrison Smith will be we think pretty much ready to go,’’ O’Connell said. “He’s kind of cleared the protocols. We’ll kind of limit his contact early on in the week but the expectation is that Harry will be able to go in London.’’

O’Connell also said that the Vikings hope to get rookie cornerback Andrew Booth Jr. back on the practice field. He has missed the past two games with a quadriceps injury.