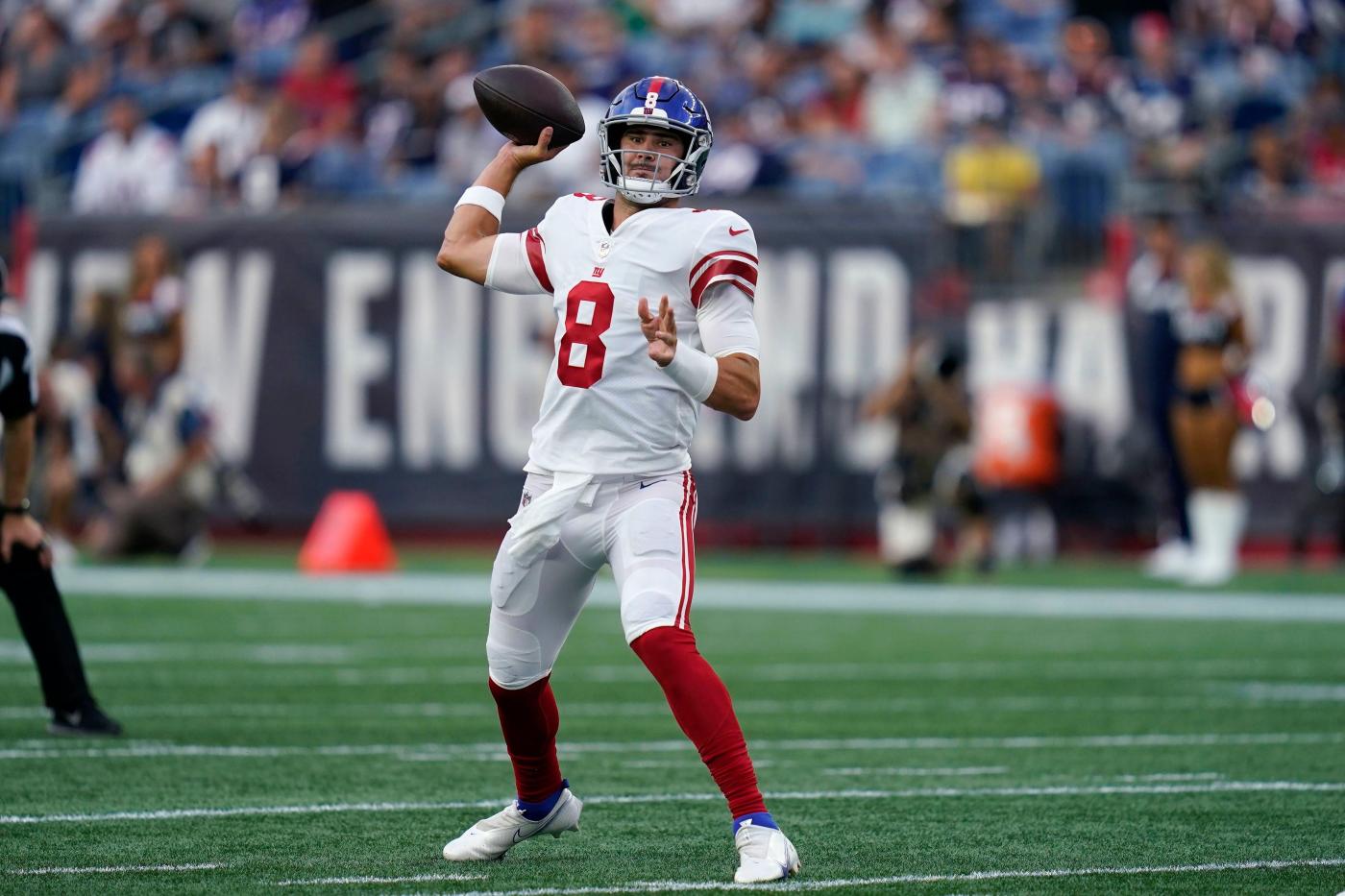 FOXBOROUGH, Mass. – Daniel Jones and the starting offense’s two drives were characteristically up and down in Thursday night’s Giants preseason opener against the New England Patriots.

Jones drove the Giants 68 yards in 13 plays for a field goal on the game’s opening drive. Then he was under siege by the Patriots’ pass rush on his second and final drive, after starting left tackle Andrew Thomas and left guard Shane Lemieux (toe) came out.

The plan was for Jones and the starters to play about a quarter, and that’s what they got. He finished 6-of-10 for 69 yards passing, with six yards rushing and a sack.

On the first drive, Jones completed 3-of-6 passes for 42 yards running Brian Daboll’s offense and converted a first down with his legs. He delivered a pair of 17-yard completions to Darius Slayton and Collin Johnson.

The bubble screen to Slayton, with Kenny Golladay and big rookie right tackle Evan Neal out in front blocking, was a creative call by offensive coordinator Mike Kafka and good execution by the players.

Saquon Barkley touched the ball five times in 12 offensive plays, highlighted by an 8-yard catch on third-and-five to keep the drive alive. But he gained only 12 yards rushing on four carries.

And the drive ended with Jones taking a shot to the back from free blitzer Anfernee Jennings, a Patriots linebacker. His pass for Kenny Golladay on 3rd-and-6 from the New England 7-yard line fell incomplete.

So Graham Gano booted a 25-yard field goal for the early 3-0 lead.

After a quick stop by the defense, though, the second drive was a struggle with Devery Hamilton at left tackle and rookie Josh Ezeudu at left guard.

Thomas, who is returning from offseason ankle surgery, seemingly was dialed back as part of the plan. Lemieux was pulled due to an injury on the first drive.

Ezeudu, Neal, Hamilton and tight end Chris Myarick all missed blocks on Jones’ second drive. So after another Jones-to-Johnson first down, he was sacked by Josh Uche on first down, smashed by Raekwon McMillan driving a Giant into his lap on second down, and flushed from his left for an incompletion on third down before a punt.

Patriots QB Brian Hoyer, who started the game, then responded with an eight-play, 55-yard touchdown drive, picking on Giants corner Aaron Robinson all the way down the field.

He completed a 33-yard pass on Robinson to Kristian Wilkerson. Robinson was called for taunting after breaking up a pass in the end zone. Then he was flagged for holding on Hoyer’s 2-yard TD pass to Tyquan Thornton.

Johnson, a standout at receiver during Giants’ camp, then fumbled the ball away to New England on backup QB Tyrod Taylor’s first drive replacing Jones.

Jones and safety Xavier McKinney were the Giants’ captains for the game.

Martinez is working his way back from a torn ACL. Williams had missed Tuesday’s practice with an undisclosed issue. Breida has missed a couple recent practices, too. Ellis’ situation isn’t clear.

Toney, coming off an offseason knee procedure, has had a reduced workload in four of the Giants’ 11 practices so far. He also appeared to possibly tweak something during Tuesday’s jog-thru in New Jersey.

Patricia called the plays early with Hoyer in the game, and then Judge called some plays for rookie Bailey Zappe.

Judge exchanged handshakes and hugs with some Giants players and front office members on the field pregame.

Daboll, meanwhile, was greeted by Patriots owner Robert Kraft and Bill Belichick prior to his first NFL game as a head coach against the franchise that jump-started his career.