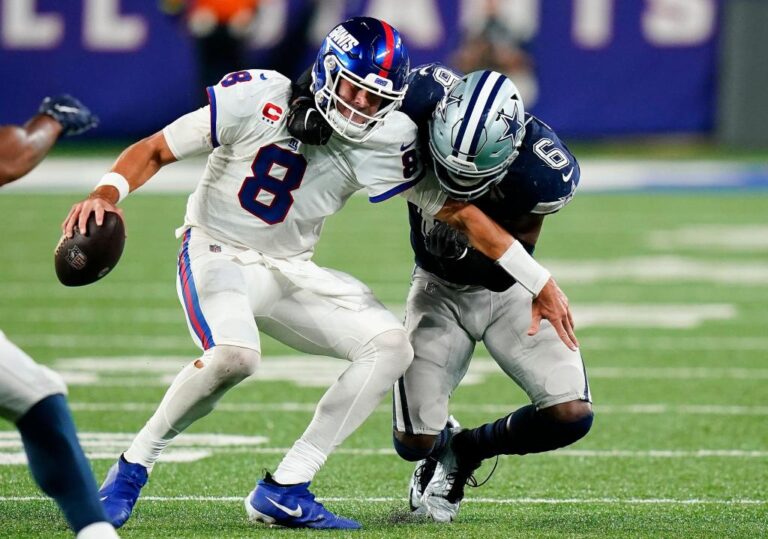 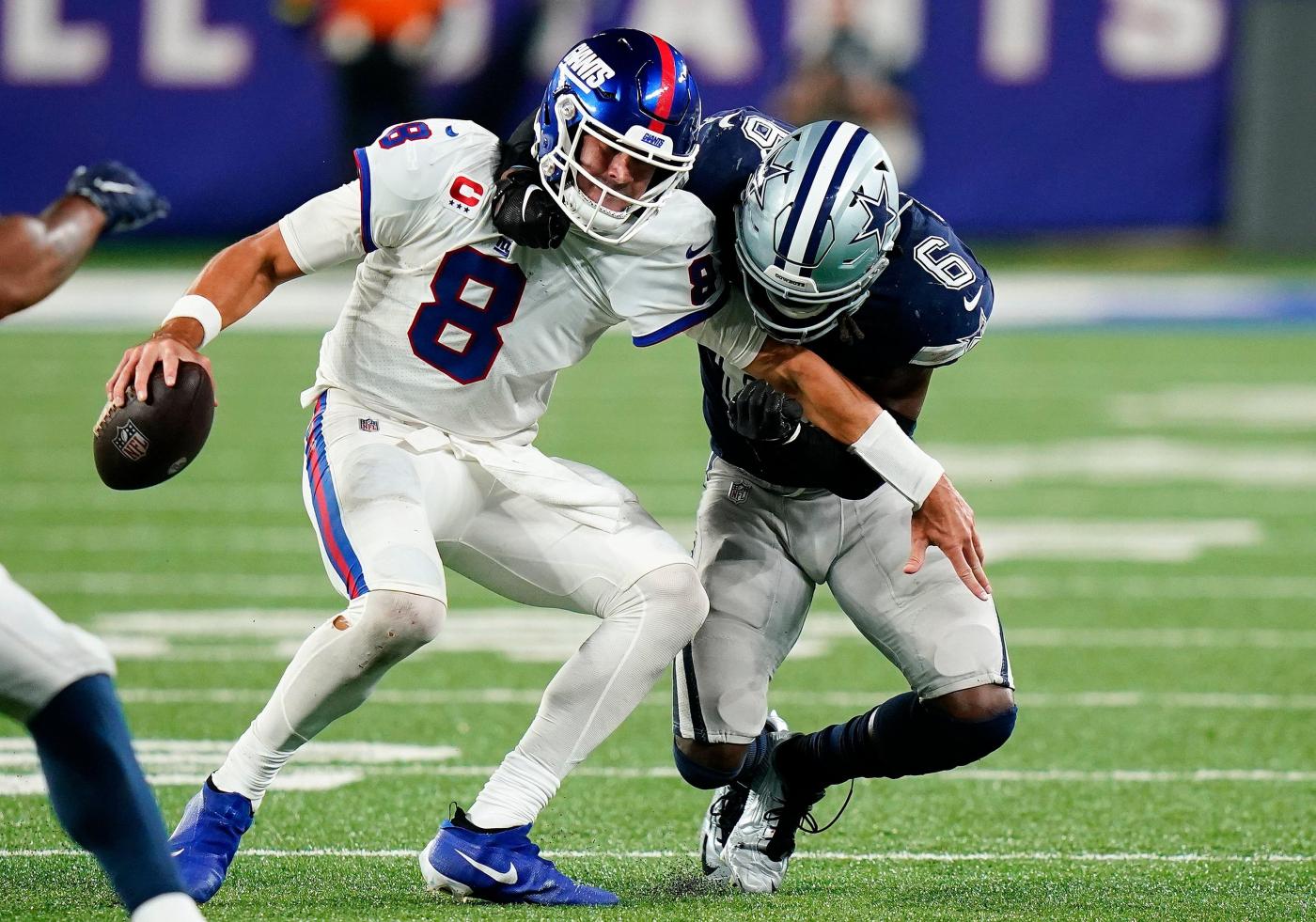 Daniel Jones ran for his life and Saquon Barkley ran for a highlight-reel touchdown.

But Brian Daboll’s Giants finished flat and fell to Cooper Rush and the division rival Dallas Cowboys, 23-16, on Monday Night Football for their first loss of the season.

They also lost veteran receiver Sterling Shepard to a non-contact left knee injury on Jones’ final throw of the night: an interception to Cowboys corner Trevon Diggs after receiver David Sills had slipped on his route.

Jones’ offense had gotten the ball back on their own 9-yard line, down 7, with 1:45 to play and a chance to tie. That was thanks to a third-down stop by safety Julian Love and defensive end Jihad Ward on Cowboys tight end Jake Ferguson.

The Giants simply couldn’t cash in.

Dallas (2-1) scored 17 answered points in a 10-minute second half stretch to overcome a 13-6 Giants lead. Barkley had put the Giants up seven with a blistering 36-yard TD run with 5:31 to play in the third quarter.

Rush and the Cowboys quickly answered, however, with 75-yard and 89-yard touchdown drives. Ezekiel Elliott’s 1-yard TD run through a Tae Crowder arm tackle tied it at 13 apiece with 27 seconds to play in the third.

Then CeeDee Lamb made a one-handed, 1-yard TD catch over Adoree Jackson on a beautiful Rush fade pass with 8:30 remaining in the fourth for the 20-13 lead.

A fairly loud “Let’s Go Cowboys” chant broke out at MetLife Stadium after the score.

Lamb made four catches for 48 yards on the go-ahead drive, including a key 4-yard catch on 4th and 4 from the Giants’ 41-yard line with 10:27 to play in a tie game. It was the right call by the Cowboys’ Mike McCarthy and Kellen Moore.

Drops by Shepard and Kenny Golladay gave Dallas the ball back and a 28-yard punt return by the Cowboys’ KaVontae Turpin set up Brett Maher’s 44-yard field goal to put the Cowboys up, 23-13, with 5:58 to play.

The Giants’ Graham Gano answered that with a 51-yard field goal, his third of the game, at 3:37 of the fourth quarter for the final score.

The Giants (2-1) lost for the 10th time in their last 11 meetings against the Cowboys dating back to the start of the 2017 season. Daboll’s team will look to rebound next Sunday in their third straight home game against the Chicago Bears (2-1).

Jones ran for 79 yards to go with his 196 passing yards. He rushed for 30 yards alone on the Giants’ third quarter touchdown drive. Barkley capped it with his TD.

Barkley followed strong blocking from his offensive line, broke an Anthony Barr tackle, juked safety Donovan Wilson and then bounced outside and outran corner Diggs to the front left pylon.

It was the first rushing TD allowed by the Cowboys’ defense this season.

But Rush and the Dallas offense answered emphatically with a touchdown drive of their own to tie the game at 13 apiece with 27 seconds left in the third quarter.

A 29-yard completion to tight end Peyton Hendershot into busted zone coverage keyed a scoring drive finished off by a 1-yard Elliott TD run to the right side. Then the Cowboys’ defense pressured Jones into a quick four-and-out.

Dallas ran the ball for 176 yards to the Giants’ 167 led by Tony Pollard’s 105 on 13 carries. The Giants’ defensive front sorely missed stud D-lineman Leonard Williams (sprained right MCL), who had a 114-game streak broken with the first absence of his NFL career.

The Cowboys only led, 6-3, at halftime despite running the ball 14 times for 126 yards through two quarters, a 9.0 yards per carry average.

Maher then got the Cowboys on the board first with a 26-yard field goal and a 3-0 lead with 2:09 left in the first quarter.

Gano answered with a 42-yard field goal of his own at 11:17 of the second quarter for the 3-3 tie. Jones paced the Giants’ offense with 110 passing yards and 24 rushing.

But Dallas’ Maher added another 28-yard field goal with 9:09 to play for the 6-3 lead that would hold through halftime.

The Giants haven’t scored a first-half touchdown yet this season. They’ve been outscored 25-9 combined in their three first halves. And they were fortunate Monday’s halftime deficit wasn’t worse.

Lamb dropped a deep pass from Rush that would have resulted in a touchdown or Dallas possession inside the Giants’ five yard line.

And on the Cowboys’ second scoring drive, Giants slot corner Darnay Holmes got away with no flag despite tackling Dallas receiver Noah Brown in the end zone on a red zone third down.

Dallas then benefitted at the end of the half from an offensive pass interference flag thrown against Shepard that negated a 20-yard Jones completion to Golladay.

The pass to the Dallas 38-yard line would have had the Giants in field goal range. Instead, they ended up turning the ball over on downs and Dallas got a crack at a third field goal. But Maher’s 59-yard try hooked wide left.