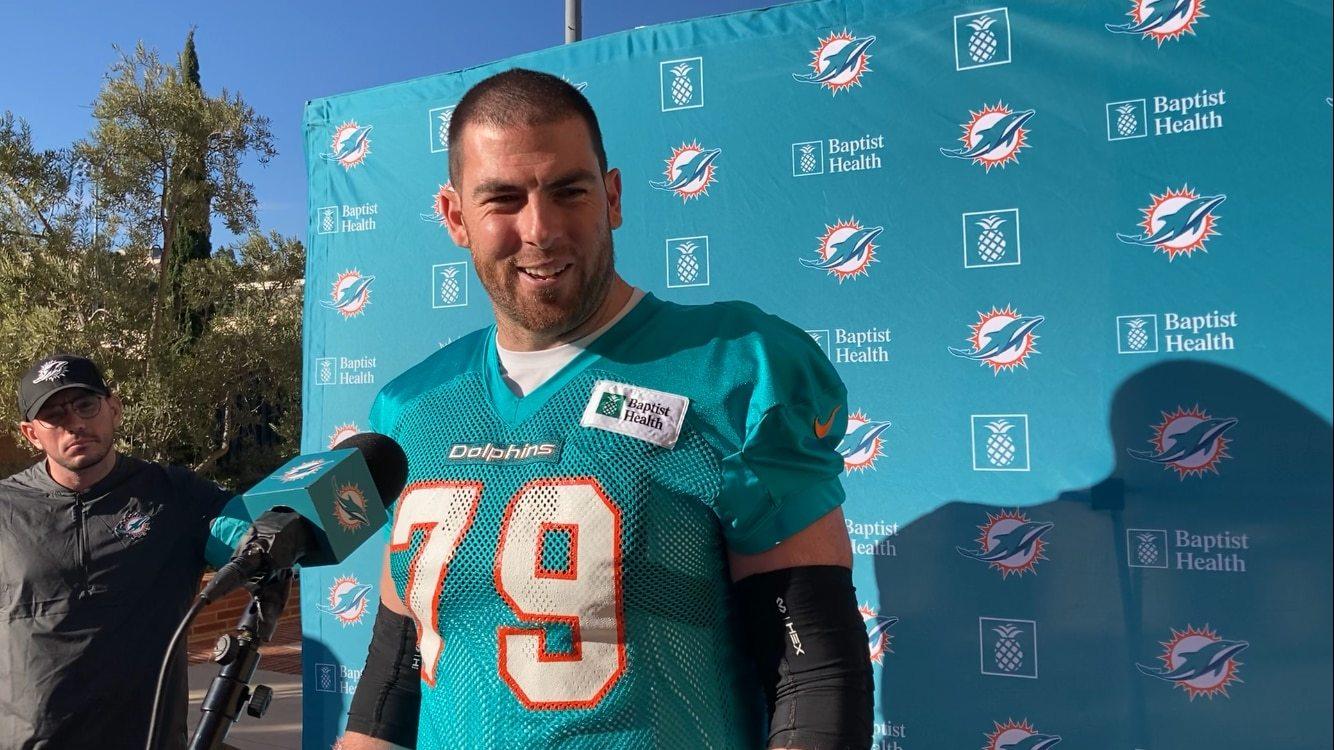 Eric Fisher has won a Super Bowl in Miami.

“Not too long ago. Good memories already here in Miami — or there in Miami,” Fisher said Thursday evening after completing his second practice with the team at UCLA, joining the Dolphins on the West Coast between games at the 49ers and Los Angeles Chargers. “It’s kind of weird [joining a team] on the road.”

Can Miami, 8-4 and sixth in the AFC playoff standings heading into Sunday night’s matchup, be the destination that delivers Fisher a second ring? Could he be a key piece that puts the Dolphins over the top with help on the offensive line? Will he just end up as a reserve?

It’s hard to answer any of those questions at this point. Fisher, who spent eight seasons with the Chiefs and one year with the Colts before signing with Miami on Monday, said he will do whatever is necessary to learn the offense and contribute as soon as possible.

The former No. 1 draft pick out of Central Michigan knew, as a free agent through the NFL regular season’s first 13 weeks, that he would find a landing spot and has kept himself prepared.

“I knew in my heart that I was going to come back,” said Fisher, who will wear No. 79 with Miami as Terron Armstead already holds his longtime No. 72. “I stayed working out this whole time. Did everything I could.”

Is Fisher, a career left tackle who said he was last in a right tackle stance in 2014, in Miami to compete with Brandon Shell on the right side with Austin Jackson on injured reserve for an injured ankle? Is he with the Dolphins to back up the three-time Pro Bowler Armstead at left tackle, with Armstead’s status still in question from a pectoral strain? If so, can he be ready to play Sunday night after one week with the team?

McDaniel believes Fisher, who has two Pro Bowls to his credit, can get caught up quickly.

“One of the reasons why we were so fortunate to get him is because we know that clock,” McDaniel said. “He’ll be up to speed fairly fast relative to most players just because of experience, his intelligence and commitment.”

There are no internal worries for the Dolphins about rust with Fisher.

“I have WD-40 in my backpack, so we’re good to go. No rust,” offensive coordinator Frank Smith said. “He’s a sharp guy and we were really excited with the opportunity presented to get him here.”

Fisher, who said he’d “love” to play this week, is open to whatever his new team needs.

“I’m going to do whatever they ask of me,” he said. “Right now, I’m working my butt off to learn the playbook, to get in football shape and be ready to roll.”

Possibly making it easier for him, is the fit he believes he is for McDaniel’s offense.

“It’s a really cool offense, a high-paced offense,” Fisher said. “I think, once I’m up to football speed and in my prime shape, I think this is a perfect offense for my abilities. I pride myself on working my butt off to be a very athletic tackle. I think it lines up well with what I’m able to do.”

Fisher brings 11 games of playoff experience to a team with a core that has not reached the postseason.

“I’ve been very fortunate to make a lot of playoff runs, so I kind of know what it takes,” Fisher said.

Fisher has had to overcome adversity since his last postseason game, though. In that 2020 AFC Championship win over the Buffalo Bills, he tore his Achilles. It caused him to miss the Super Bowl, and the Chiefs backup tackles couldn’t deal with the Tampa Bay Buccaneers’ pass-rushing tandem of Shaq Barrett and Jason Pierre-Paul in a 31-9 loss. It was Fisher’s last game with Kansas City before spending last year with the Colts, playing 15 games.

Fisher’s move to the Dolphins reunites him with wide receiver Tyreek Hill, who played five seasons with Fisher in Kansas City. Hill said the two were neighbors in Kansas City. He called the 6-foot-7, 315-pound tackle a “big brother” and said his son would always hang out at “Big Fish’s” house.