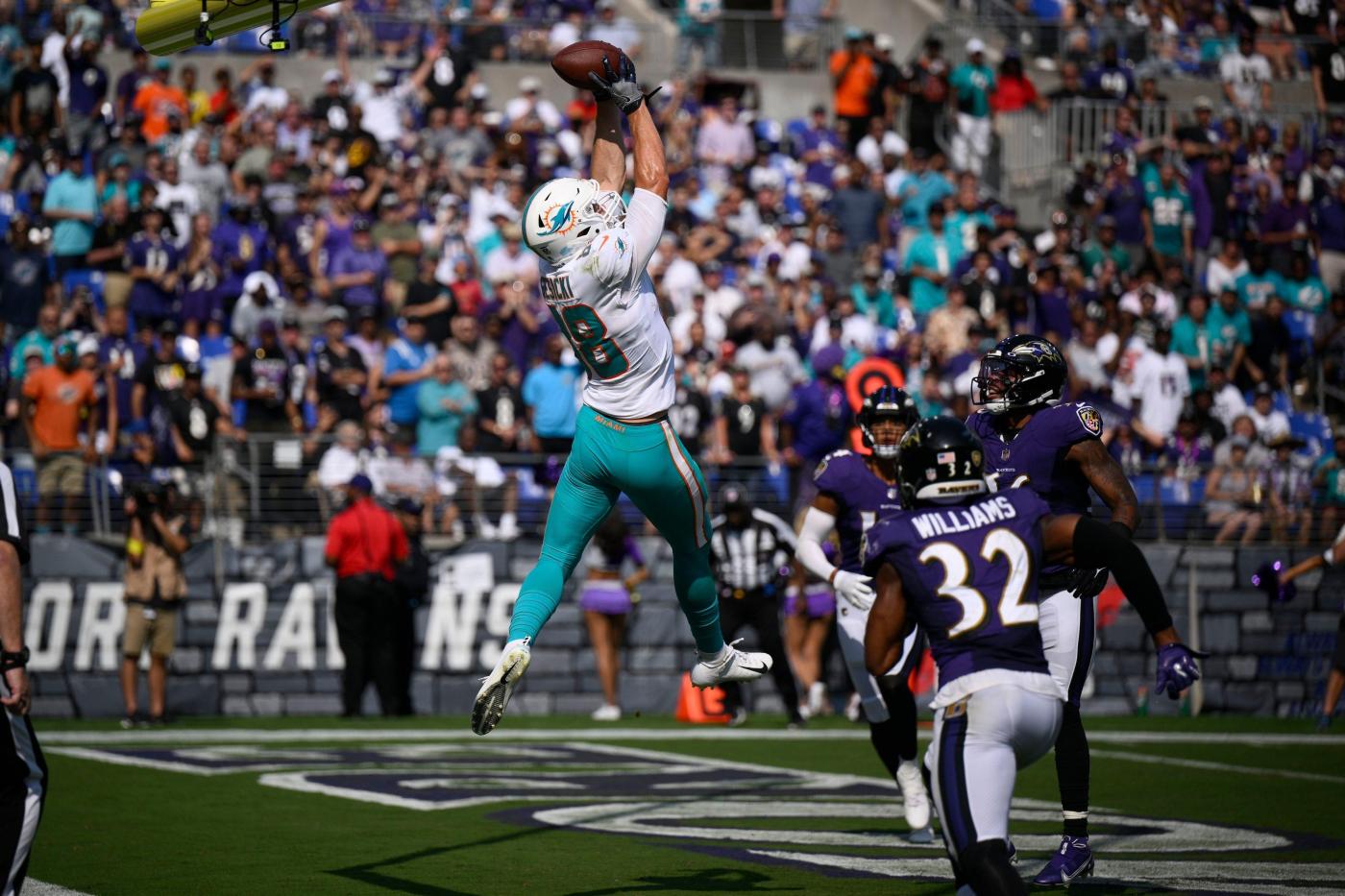 It was third-and-13 from the Baltimore 14-yard line. The Dolphins, trailing the Ravens, 28-7, midway through the third quarter, needed a touchdown.

The red zone offense, which the Dolphins only truly showed once in the opener against New England, had to make a play. It came through in a big way as quarterback Tua Tagovailoa hit tight end Mike Gesicki in the end zone for a touchdown, moving the Dolphins offense closer to an answer in that crucial category.

What did they learn about the red zone offense?

“We’ve got playmakers and we’ve got guys all over the field that can make plays, and we’ve got a quarterback willing to put the ball on the open guy,” Gesicki said.

The red zone wasn’t the only category where the Dolphins learned a thing or two about their offense.

The offense showed an ability to come back from a two-score second-half deficit. The offensive line showed it can deliver a commanding performance with a starter absent. And the running game, which gained 86 yards and averaged 4.8 yards per carry, showed it can be effective.

But many vital aspects of the Dolphins offense showed exceptionally well in Sunday’s performance, especially in the second half.

Look at the comeback ability as an example of something they learned. The Dolphins came back from a 35-14 fourth-quarter deficit for that stirring 42-38 victory at Baltimore. Many teams think they can accomplish such a feat, but the Dolphins now know they can turn the trick.

Coach Mike McDaniel said having such an experience, and having that confidence, serves teams well.

“For every team, every year you kind of have to feel that before you can totally have complete and utter commitment and control over games moving forward,” he said.

The red zone offense offered another area for confidence.

During the season-opening 20-7 victory against New England the Dolphins’ red zone offense had two possessions, one of which was the game’s final possession when the Dolphins were running out the clock.

On that pivotal third quarter red zone possession against Baltimore, Tagovailoa dropped back against a nine-man coverage/two-man rush defense, waited patiently, then threw to Gesicki, who stretched his 6-foot-6 frame as far as it would go, extended his arms high in the air, and snatched the touchdown pass in dramatic fashion.

The offensive line held together well despite missing right tackle Austin Jackson (ankle), who was replaced by Greg Little. Tagovailoa was only sacked once and the rushing game had holes to run through.

“Greg did a great job,” center Connor Williams said. “We have a great O-line group. We have a great room. Everyone is just going to step up and do as needed, and fit in where they’re needed. I think that’s O-line play at the end of the day because you never go through the 17 games healthy.”

As for the lessons learned Sunday, the ability to come back from a big deficit might be the most valuable. McDaniel said that actually serves as a two-way lesson.

“You learn that you’re in every game, but also that no lead is safe,” he said.

In the process of the team learning about the offense, McDaniel learned something about his team.

“I was really excited about that whole process and just how guys responded,” McDaniel said, “because there were plenty of times where they could have tapped and they didn’t.”

Gesicki and the griddy

Gesicki has gotten lots of humorous and playful reactions from his version of the “griddy,” the dance he attempted after his touchdown. Gesicki has enjoyed the attention and the laughs.

“I was too excited,” he said of his version of the dance most famously done in the NFL by Minnesota wide receiver Justin Jefferson.

“I hit it in about fast forward. So maybe [I should] slow it down. But that’s what I do. I have fun. I enjoy myself. I had an opportunity to make a play, made the play and then was able to celebrate it.”

McDaniel had a video cutup made of other poor attempts at doing the dance and showed it to the team. McDaniel said he wanted players to know Gesicki didn’t necessarily give a bad effort.

“There could be worse,” McDaniel deadpanned, “but it was in the family of ‘worse,’ if that makes sense.”

“That was, wow, it was interesting,” Wilkins said with a smile. “I give Mike props for the effort. He gets an ‘A’ for effort but the execution was pretty bad. That was pretty funny. I appreciate all the laughs I’m getting seeing it on social media everywhere.

“Mike’s one of my best friends so I give him an ‘A’ for effort.”

As for the video McDaniel showed the team, Wilkins liked it.

“That was really funny, that was really on point,” Wilkins said. “We all got a good laugh out of that one. I didn’t see Mike laughing too much, but I thought it was pretty funny.”

It makes and doesn’t make sense in context Source link