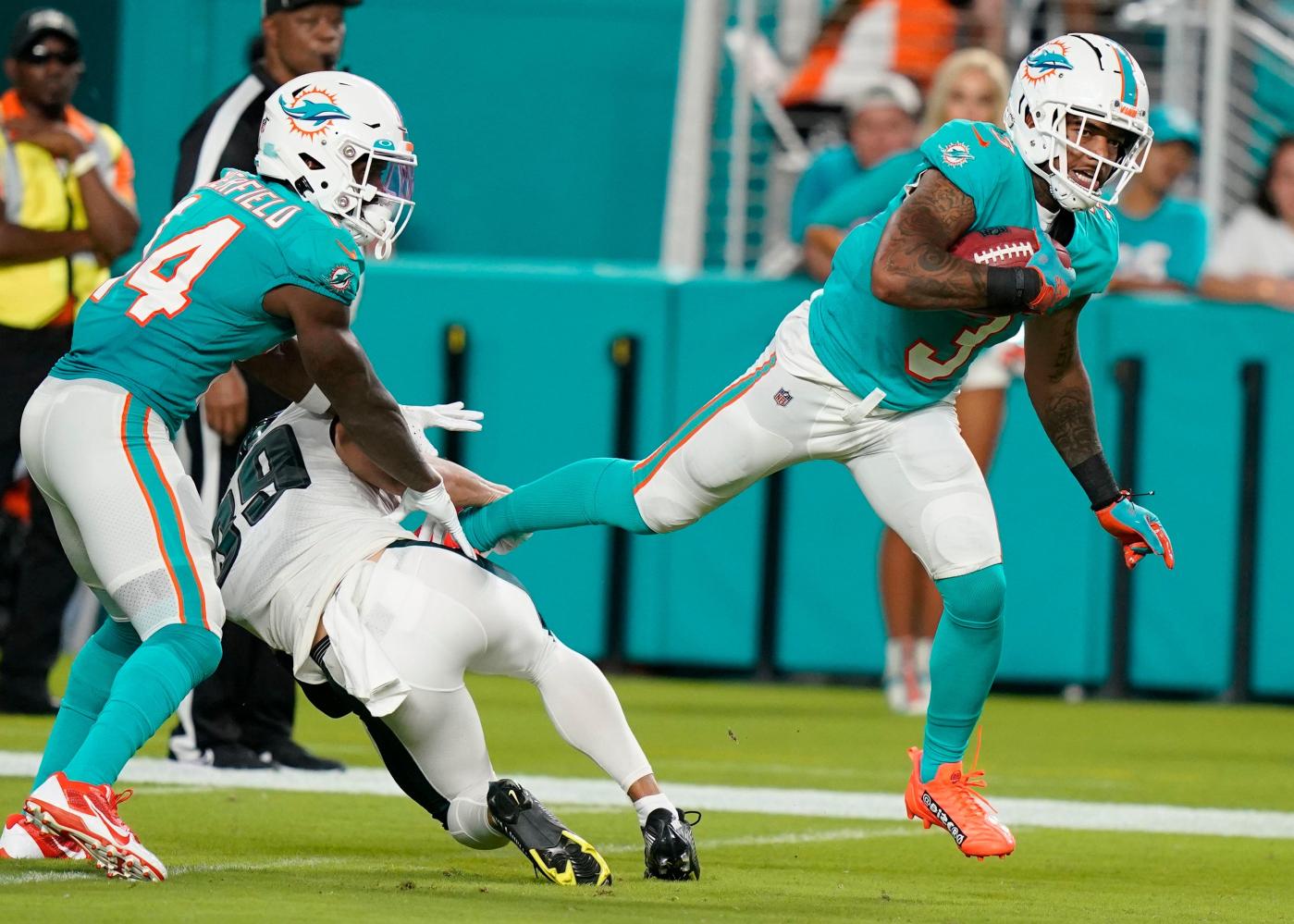 Dolphins coach Mike McDaniel opened some of his playbook in the third preseason game, evidently to give the New England Patriots something to think about for the regular-season opener on Sept. 11.

If you could draw up a script for the offense to have in its final dress rehearsal, Saturday night’s performance against Philadelphia’s second-team defense checked all the boxes:

A. Good night for Tua Tagovailoa. Good? He completed 6-of-7 passes for 121 yards and a touchdown;

B. The offensive line, which had been a point of concern, opened enough holes for 71 yards on nine carries. Good protection for Tua, too, as the lone sack came after he had pumped the ball in the pocket before starting to scramble, showing he knew his time was up;

C. Tyreek Hill caught a 51-yard pass on the first play and two passes for 64 yards on the opening drive before sitting down.

2. The context of Saturday is the Dolphins starters played against Philadelphia’s second-teamers so, yes, make of it all what you will. That goes for all of preseason. Saturday showed different philosophies from the two coaches after the second joint practice was canceled this week due to non-COVID illnesses among Dolphins. Philadelphia sat its starters. Mike McDaniel wanted his starters to get some final game-conditions work before the season.

3. Don’t listen to the silly patter of preseason that Skylar Thompson should be the back-up over Teddy Bridgewater. If Tagovailoa misses a game or three, you want experience in the game and Bridgewater brings that in a good package. He was four for 10 for 74 yards Saturda, though he had a couple of balls dropped and a TD pass taken away by offensive interference. Thompson is this preseason’s Reid Sinnett. He’s a rookie you’d love to develop in your program just like the Dolphins wanted to with Sinnett after last preseason. Sinnett went to the Dolphins practice squad, was cut in October and he’s the Eagles back-up quarterback now (completing 11 of 18 for 95 yards).

4. It’s time to start looking at the opener against the Patriots. Mac Jones this preseason in a new offense with new coordinators? As analyst Warren Sharp tallied, he completed 13 of 21 passes for a 6.3-yard average with one interception, three sacks and five hits. That’s not the kind of numbers that say the Patriots are comfortable with their offense to start the season.

5. I only wrote about the game because that was on display. But the news of Saturday was awful inside the Dolphins and the larger community with the passing of Jason Jenkins, the Dolphins vice president of communications and community affairs.

The Dolphins won the NFL award last year for public service, and that’s no surprise if you see the work they do in the community. Jason was the backbone of that. I followed him and his crew one afternoon as they hand-delivered Thanksgiving meals to individual homes. That was daily work for them.

Say a prayer for Jason’s wife, Elizabeth, and their three children.