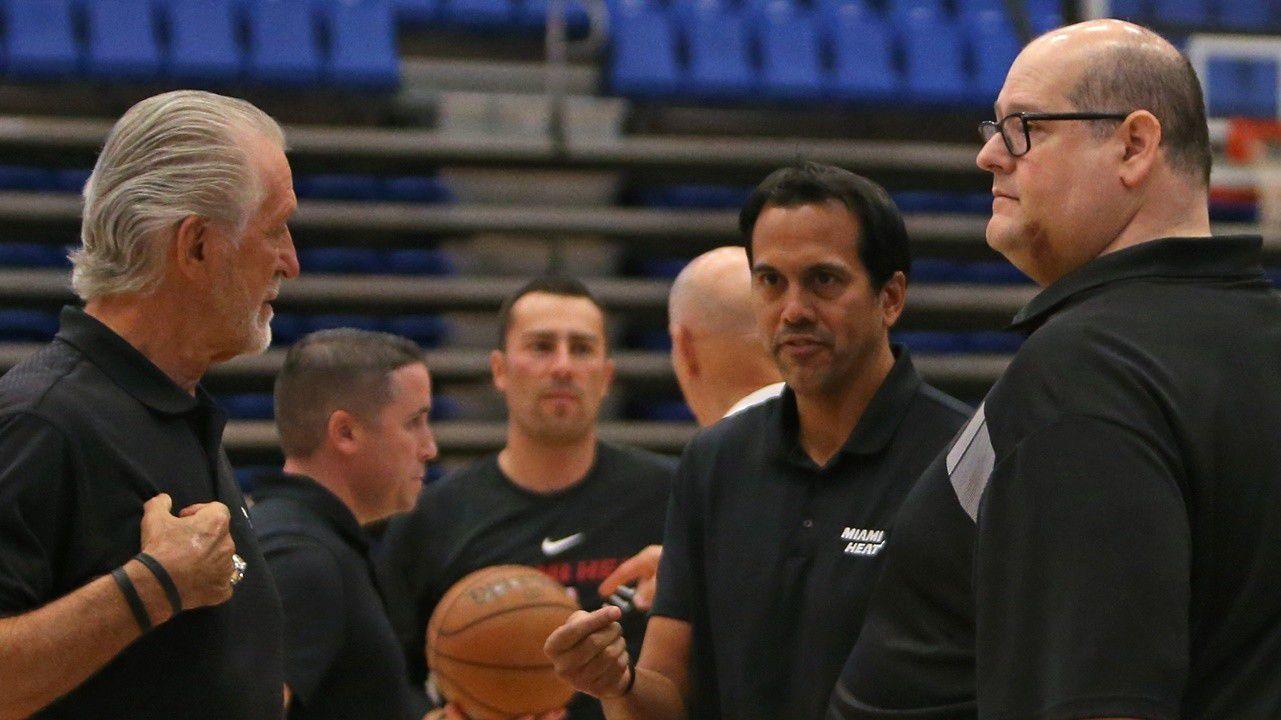 There is a difference when it comes to the latest messaging from the Miami Heat.

Yes, they like their roster, don’t feel compelled to make another move this offseason, don’t feel stymied or squeezed by what is playing out with the Brooklyn Nets regarding Kevin Durant or perhaps even how the Danny Ainge Show regarding Donovan Mitchell is being produced by the Utah Jazz.

But liking your roster doesn’t mean you are done.

And that, especially at this time of year, with two months remaining before the start of training camp, is a significant delineation.

The Miami Dolphins? They can claim to be done, with their training camp opening. The timing there matters. Cohesion has a specific timetable.

That will be if and when they sign off on a contract extension with Tyler Herro.

Because at that point, based on their limited supply of tradable assets, is when they would be sending the ultimate signal, one with ultimate transparency.

Once Herro is signed to an extension, he essentially becomes untradeable for the 2022-23 season, because his outgoing salary would count exponentially more than what the Heat, as a team operating above the salary cap, could take back in return.

Making a move for Durant or Mitchell or any other big-ticket trade target becomes far more complex if Herro is off the table.

This, in fact, is where the Heat stood during the truncated 2020 offseason, after advancing to the NBA Finals in the pandemic-delayed end to the previous season in the Disney bubble setting.

At the time, the possibility remained of the Heat potentially making a future play for Giannis Antetokounmpo, whose contract with the Bucks was coming to an end.

But that also was when the clock was ticking on the extension deadline for Bam Adebayo.

In a perfect world, the Heat would have waited on Adebayo, rather than closing a door on Antetokounmpo, as remote as that possibility might have been.

Instead, the Heat locked Adebayo into his extension, removed themselves from the salary-cap space race in the 2021 offseason, and moved forward with what was in place.

Now, with the twists and turns with the Durant saga, one that could well be a never-ending Durant saga, there is a notion of teams being played by the Nets, of offseasons being held hostage.

For the Heat, that, at times, can require pushback, because they so often tend to be in the middle of it all.

Such is the bane of being a desirable destination, one overseen with Pat Riley’s Godfather-like respect, one that has the beautiful mind of Andy Elisburg to make even the highest math work.

For years, that is the part that has stung, the notion of falling short, even as it goes against the maxim that you miss 100 percent of the shots you don’t take.

Adding Durant would be a grand slam. Adding Mitchell would be a homerun. Bolstering at power forward would be extra-bases success.

Even without such a move, the Heat still are considered top-four-talented in the Eastern Conference. It’s not as if Adebayo, Herro, Jimmy Butler have gone anywhere. It’s not as if Kyle Lowry has not taken stock of a different type of Heat messaging, in his case Riley’s bluntness when it comes to conditioning for older players.

So, no, the Heat are not being played by the Nets or the Jazz or any of this offseason’s NBA disruptors.

And, yes, they are making clear that they like what is in place.

But that should also not be taken as they are done.

When/if Herro is extended, they likely will be done.

For now, still open for business, albeit with an inventory they also are willing to put on display for 2022-23.