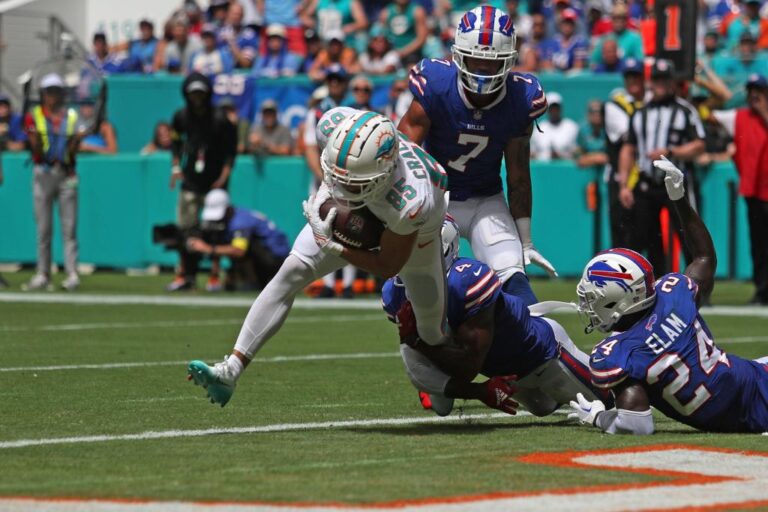 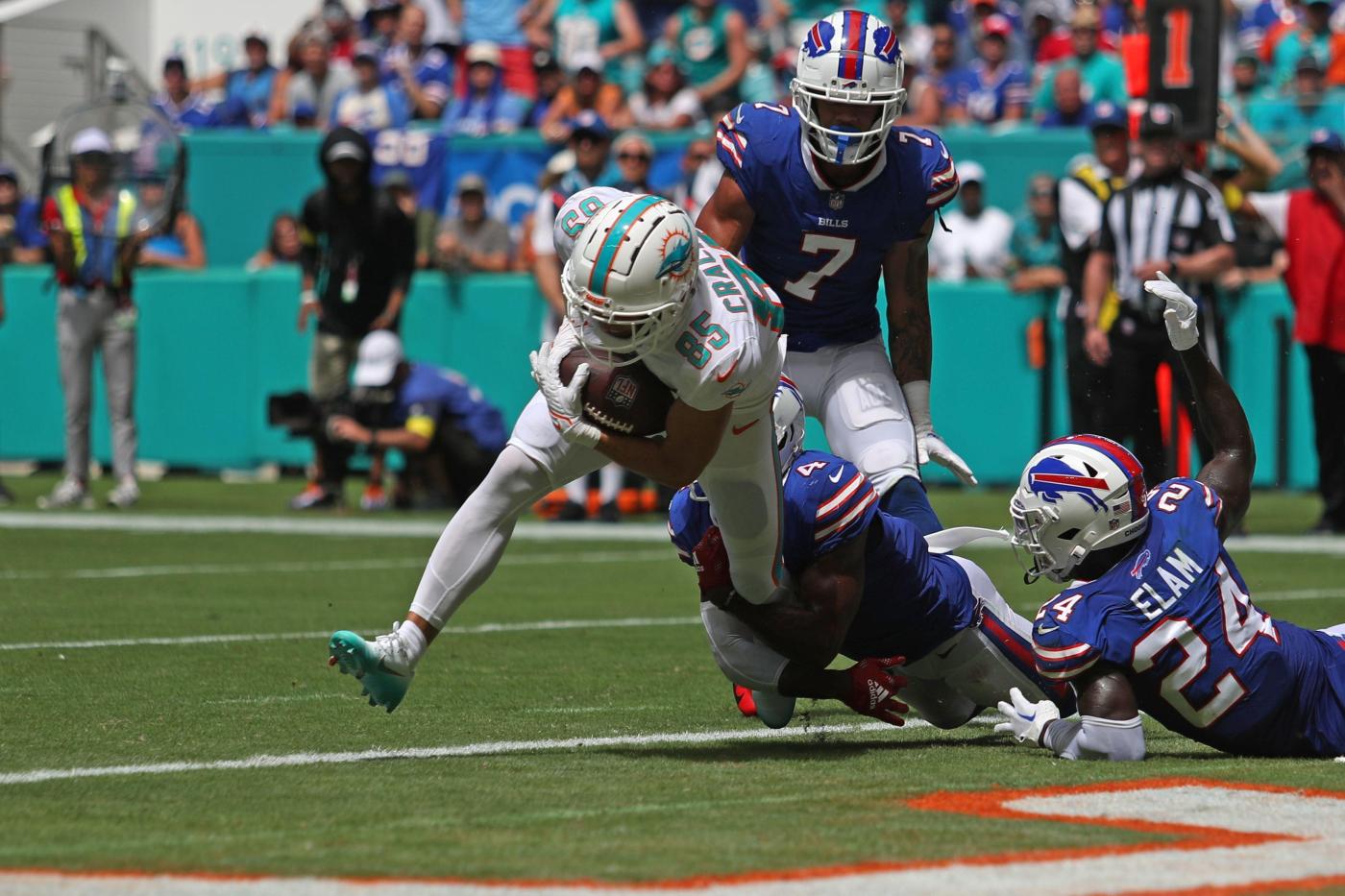 Here are 10 thoughts on Sunday’s game:

1. Play of the game I: Fourth-and-goal at the 2. A minute, 49 seconds to play. Bills’ Josh Allen has Isaiah McKenzie open in the corner and throws short — and this Dolphins defense completes another goal-line stand to go with their work at Baltimore. This one gives the Dolphins the ball at their 2 and …

Play of the Game II: Dolphins punter Thomas Morstead is at the back of the end zone with the ball on the 1-yard line and punts into the back of blocker Trent Sherfield. Safety. It’s now Miami 21-19 and a field goal can win it. Buffalo got the ball with 1:25 left, Allen getting a second chance and …

Play of the Game III: Allen, running to get his offense under center at the at the Dolphins 44-yard line, can’t do it quickly enough and time runs out. You had to wait for the ref to say, “That’s the end of the game,” to be sure.

2. Tua Tagovailoa eluded a blitz, completed a nice third-down pass in the second quarter and then got a shove from Bills linebacker Matt Milano that warranted a roughing penalty. In falling, Tua’s head bounced hard off the turf and he seemed to come up woozy. He immediately was taken out of the game and went to the locker room. The upshot? The Dolphins said he was “questionable” with a head injury. Both coach Mike McDaniel and Tagovailoa said after the game the problem was a back injury. Tua’s first play back in the second half was a 22-yard pass. For the day, Tagovailoa completed 13-of-18 passes for 186 yards and the touchdown. Postscript: The NFLPA is reportedly investigating the concussion protocol around Tua to see if it was properly followed.

3. Stat of the game: Buffalo ran 90 plays to the Dolphins 39. That’s nuts. It’s reflected in the time of possession, too, as the Dolphins only had the ball for 19:20. The game began with injury issues especially to the Bills defense. As it went on both sides lost players to the heat, but Buffalo lost more. Buffalo media counted the Bills losing 13 players as the game played out, most to the heat. On a 20-play, 87-yard drive in the third quarter, the Bills ate up 9:22 and players from both sides dropped out (Xavien Howard was suffering from cramping for the Dolphins). But the number of plays and time of possession in Buffalo’s favor was staggering — and those are usually winning numbers.

4. Give this Dolphins defense full credit. Buffalo had scored 31 and 41 points its first two games. It was up against a quarterback in Allen that looks like he’s the best in the game right now. Allen threw 63 passes and had 400 yards passing and two touchdowns Sunday. He ran for another 47 yards. This defense not only effectively got a turnover off Allen to make it a 7-7 game, but made him earn everything. Everything. The Buffalo scoring drives were 10, 14 and 20 plays — and a 17-play drive ended in the defense stopping Buffalo after first-and-goal from the 2. The Bills are a tough team, and give Allen especially credit for converting 10 of 16 third downs. But this defense held up to perhaps the league’s best offense early this year with big plays of its own and that’s a good mark for what’s coming.

5. Buffalo was without its entire starting secondary Sunday. The two rookie cornerbacks and two safeties who began the game had a total of three starts between them. So it’s no wonder the question was how this Dolphins passing game would attack them. And? Well, for much of three quarters the Bills had to be happy in only really giving up one touchdown drive (the second came after the defense got the ball at the Bills’ 6). But then in the fourth quarter Tua and the deep passing game went to work. He threw 32 yards to an open Jayen Waddle to start the drive. Then, on third-and-22, Waddle got behind the Bills defense for a 45-yard gain to the Buffalo 6-yard line to set up the go-ahead touchdown at 21-17. Buffalo was paying special attention to Hill as he only had four targets and two receptions. Waddle had four catches for 102 yards.

6. Left tackle Terron Armstead keeps showing his worth. Von Miller had two sacks in the first two games and disrupted play in each of the Bills wins. Miller wasn’t heard from Sunday. He lined up opposite Armstead all day. And all day Armstead stymied him. Midway through the fourth quarter, Miller had no tackles, no quarterback pressures and was only on the stat sheet because of a pass defensed. That’s what a star left tackle does.

7. Jevon Holland blitzed off the left side of the Bills line, sidestepped a block attempt by Devin Singletary and created the latest game-changing play by the defense. In the opener, it was a Brandon Jones sack against New England’s Mac Jones that caused a fumble which bounced into Melvin Ingram’s hands for a touchdown. This time it was Holland’s blindside hit of Allen that allowed Ingram to recover the fumble at the Bills’ 6-yard line. Three players later, it was a 7-7 game.

8. Second-year player Jaelan Phillips became a target of questions and pass-rush concerns this past week when it should have been an issue for the whole defense. There hadn’t been many Emmanuel Ogbah or Ingram sightings, either. Well Ingram changed that Sunday. He stopped a scrambling Allen short of the goal line to be credited with one sack, and then sacked him again in the first half to cause a fumble that the Bills recovered. Throw in that fumble recovery on Holland’s sack and Ingram had an impactful first half. As for Phillips, you need more from him, but let’s remember it’s not a straight-line progression for most pass rushers or edge players. In his third year, Jason Taylor had a half-sack through eight games. If that doesn’t tell you to turn down the volume on the second-year Phillips, nothing will.

A. What was Buffalo doing just before halftime? With 6 seconds left at the Dolphins 34-yard line, Allen looked like he could have spiked the ball and let Tyler Bass attempt a 51-yard field goal (his long the past two years was 58 and 57 yards). Instead, Allen threw a short pass to Stefon Diggs and the clock ran out. Why? Allen bobbled the snap and there’s a rule if you bobble a snap you can’t spike the ball. So he had to go through with the play;

B. Cornerback Keion Crossen knocked the ball loose of Bills receiver Gabe Davis to turn a touchdown into an incompletion. The Bills had to take a third-quarter field goal;

C. Ingram can expect a fine for kicking/leg-whipping Allen in the groin.

D. Morstead’s 74-yard punt after the safety is one of those under-the-radar plays that won the game. Even given the 12 yards punters stand behind the line, it’s a big punt. Buffalo started their last-gasp drive at the 23 rather than close to the 40 in the way many teams do after a safety.

10. Next game: Dolphins at Cincinnati. The dreaded Thursday night away game. Actually, there’s no statistical evidence showing any undue bias for records on Thursday night, home or away (though Dolphins did lose, 22-7, on Thursday in Cincinnati in the 2016 season). Cincinnati might have had a Super Bowl hangover in starting 0-2 before beating the Jets on Sunday. Or maybe it was Joe Burrow missing the preseason after appendix surgery. Or maybe they were just fortunate to make the Super Bowl?