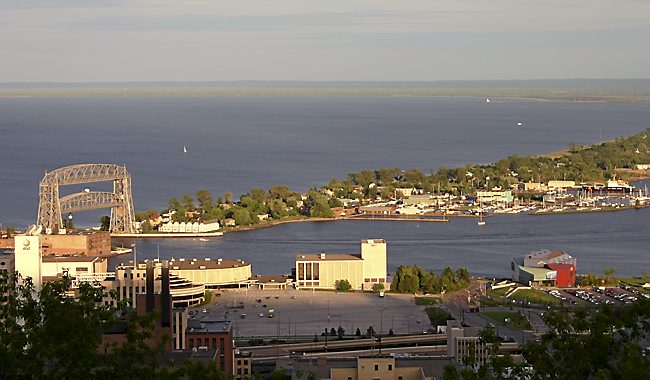 DULUTH, Minn. — After two years of fighting a felony assault charge, Conrad John Sunde IV was contrite when he appeared for sentencing Monday.

But a last-minute apology did not earn any leniency for the city’s former Firefighter of the Year, who is likely to lose his job after attacking a 65-year-old woman along a western Duluth trail in 2020.

“I went through two years of hell because of this guy, and it continues to go on,” victim Mary Modec told the court.

But Neo declined to stay imposition of the conviction — a more favorable outcome requested by defense attorneys, who said it may allow the defendant to continue working in his chosen profession.

“You may well be forced because of this to find something else to do,” the judge told Sunde, “and that may be just what you need.”

Modec confronted Sunde about his off-leash dogs on the Duluth Traverse Trail System on July 10, 2020. After a verbal altercation, Modec said Sunde ended up striking her with his mountain bike, knocking her to the ground, before grinding her face into the gravel and tossing her phone into the woods as he left the scene.

Modec suffered a broken nose, deviated septum and many cuts, scrapes and bruises in the incident. Left without any means to call 911, she had to walk home and seek help from a neighbor.

Sunde claimed at trial that he acted in self-defense, afraid of Modec using a canister of pepper spray around her neck against him or his dogs. He said he tried to put the bike between them and denied shoving her face into the ground.

Neo, serving as sole fact-finder after Sunde waived his right to a jury, referred to his defense as “patently absurd.” Finding Modec’s account more credible, the judge wrote in a June decision that Sunde was the “aggressor” and could have simply left the scene without resorting to violence.

Sunde acknowledged Monday that Modec’s testimony and his presentence interview with a probation officer brought to light “issues I didn’t realize.” While not elaborating, he apologized and vowed to work to better himself.

“I let her down,” he said. “I let the community down. I let myself down. I let everyone down. I am particularly sorry for that.”

Defense attorney Mikkel Long asked for the stay of imposition, which would have allowed the felony to be deemed a misdemeanor upon successful completion of probation.

“He may have an opportunity to maintain employment,” without a felony conviction, Long told the court. “That could make the difference for him on the issue.”

Modec balked at that idea, telling Sunde: “There was no stay of (imposition) when you attacked me.”

The victim, who continues to have breathing issues and may yet require surgery, said she has been left to fall through the cracks of the justice system. She can’t get the services that would be provided to others, such as domestic abuse survivors, and she’s left paying for her own therapy while Sunde has continued on with his day-to-day activities.

“I see a fire truck and I want to throw up,” Modec told the court. “I think the city would be making a big mistake to keep him on. It’s wrong.”

St. Louis County prosecutor Nate Stumme did not recommend nor oppose the request for a stay of imposition, saying “it’s appropriate to most anyone in Mr. Sunde’s situation.” But he said the case stands out among the thousands he has prosecuted, with a victim who “has been impacted so profoundly.”

Judge Neo agreed, saying Sunde’s conduct affects the sense of safety and security for so many hikers, joggers and bikers who enjoy the city’s extensive trail systems.

Neo said it was clear that Sunde lacked “balance” on the day of the attack, whether or not he realized something was off. After decades of service in the U.S Marine Corps and Duluth Fire Department, she said a change could be good for him.

Neo, denying the stay of imposition, ordered Sunde to comply with a number of conditions, including screening for potential participation in the South St. Louis County Veterans Treatment Court, completion of anger management training, 100 hours of community service and paying roughly $300 in restitution. He will avoid a 366-day prison sentence if he remains in compliance for three years.

Decisions on Sunde’s ongoing employment could be made in the coming weeks or months. Sunde, who served a 30-day unpaid suspension in the immediate aftermath of the incident, remains actively employed as a firefighter.

“These agencies informed us that they are investigating this,” Duluth’s chief administrative officer, Noah Schuchman, said in a statement Monday. “The timing and result of those investigations are outside of the City of Duluth’s control and we would refer further inquiries to them on this matter.”

Zach Kayser, a spokesman for the Minnesota Department of Public Safety, said a review committee that was set to consider Sunde’s license earlier this month had its meeting postponed to October.

“We’ve been moving very deliberately in this case because we know it will form a precedent for how licensing issues are handled in the future,” Kayser told the Duluth News Tribune. “It’s rare in the first place that a license will come under question due to a criminal matter, and in general those are resolved when the license expires while the person is incarcerated.”

Kayser said the agency has been working closely with the Minnesota Attorney General’s Office. A spokesman there did not immediately respond to a request for comment.