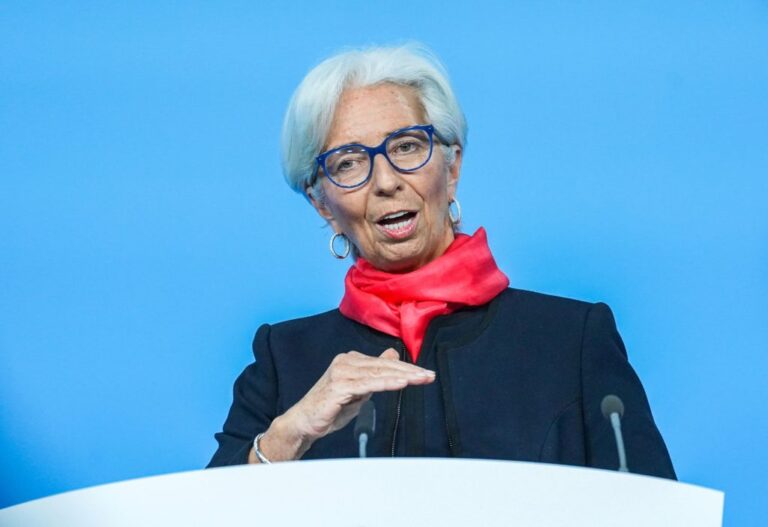 Euro-area inflation probably hit another record last month, just short of 10%, keeping the heat on the European Central Bank as it considers how aggressively to raise interest rates.

All economists surveyed by Bloomberg predict a new all-time high for consumer-price increases. The median forecast is 9.7%, with four predicting a double-digit outcome. Data for the 19-nation euro zone are due Friday following reports from the region’s three largest economies and an assessment of business sentiment around the bloc.

With prior readings having given a key impetus to expand tightening at the past two ECB meetings, the new report is likely to be one of the most important ingredients for the next decision, due in a month’s time.

That backdrop, along with any policy implications from Italian elections on Sunday, will surely be a dominant theme for President Christine Lagarde when she testifies to lawmakers in Brussels the following day. She’s likely to face questions on where interest rates will settle after 1.25 percentage point in hikes so far, and which way officials will lean if they have to choose between fighting inflation and protecting jobs.

Her appearance comes during one of the busiest weeks for ECB speeches this year. All of Lagarde’s five Executive Board colleagues, as well as 10 of 19 national central bank chiefs, are due to make public comments.

“Euro-area inflation is likely to have reached a new high of 9.6% in September as food and energy costs continue to rise. The end to German price-damping measures introduced at the start of the summer will also add to price pressures.”

Elsewhere, a reading of the Federal Reserve’s preferred price gauge, new OECD economic forecasts, and inflation in Brazil are just some of the reports that will keep investors focused. 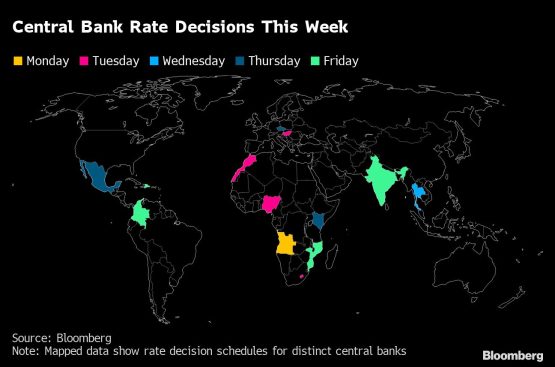 The US economic data calendar gets a little busier, capped on Friday by the August personal income and spending report that will include a read on the Fed’s preferred inflation gauge.

However, the core PCE price gauge that excludes food and energy is seen accelerating. That would be similar to what the recently released consumer price index report showed, a result that played a role in the Fed’s decision on Wednesday to boost its benchmark lending rate 75 basis points for a third straight meeting.

The spending portion of the report will help determine the pace of economic growth during the third quarter, while the income data will offer insight on the financial health of consumers. 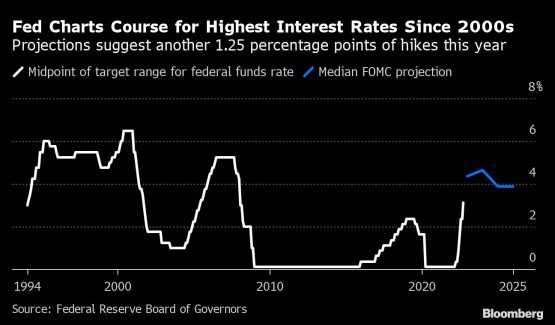 The week will also include a slew of speaking engagements by Fed officials, fresh of their rate hike and amid projections of even higher borrowing costs in the months ahead to counter persistent inflation.

Their comments will be parsed for clues on whether Fed policy makers are leaning toward a fourth-straight 75 basis-point increase in the federal funds rate in November.

Other data this coming week include durable goods orders, separate surveys of consumer confidence and new-home sales, and annual revisions to gross domestic product and income back to 2017.

In Japan, there’ll be a continued focus on the government’s stance on currency intervention, following the central bank’s decision to stick with ultra-low rates the previous week.

Governor Haruhiko Kuroda will make a speech and talk to reporters on Monday to give further insights into his thinking.

The central banks of India and Thailand will meet to determine policy this week, with both expected to further raise rates as their currencies slump.

In South Korea, business surveys and industrial production data are set to reflect the state of overseas demand.

Down under, Australia’s retail sales data should indicate whether the RBA’s decision to switch to smaller rate hikes was correct, while in New Zealand, business and consumer confidence data are set to give an initial look into whether the country’s larger-than-expected second quarter bounce may be continuing.

In China, PMIs on Friday will be closely watched to assess whether the recovery picked up in September or stalled.

The UK is likely to stay firmly in the sights of investors after a week when the pound crashed in the wake of the biggest round of tax cuts in half a century. Several Bank of England officials are due to speak, including chief economist Huw Pill and two deputy governors. Given the fraught global backdrop, the OECD’s interim outlook on Monday may also draw attention for its running commentary on the state of monetary policy and a possible deterioration in growth outlooks.

In Eastern Europe the same day, the Czech government will unveil a 2023 budget draft with planned spending on energy subsidies and windfall taxes on selected industries. Later in the week, policy makers are likely to keep rates unchanged, judging inflation pressures to be easing.

Looking south, a downswing in inflation will likely persuade rate-setters in Monday in Angola, which vies with Nigeria as Africa’s biggest oil producer, to cut borrowing costs, making it an outlier at a time of global monetary tightening.

In Brazil mid-month consumer price readings are expected to confirm inflation in Latin America’s biggest economy is well and truly coming down — perhaps as much as 4 percentage points since May. Brazil’s central bank posts the minutes of last week’s meeting where it snapped a record 18-month, 1,175 basis-point tightening cycle. Policy makers warned that 13.75% may not be the terminal rate, though, depending on the behavior of inflation expectations.

In Mexico, the central bank is facing a very different picture as inflation expectations have come unmoored and core readings are more than 500 basis points over Banxico’s 3% target. Look for policy makers to extend a record tightening cycle and deliver a 75 basis-point hike to 9.25% with more to come. Mexico and Argentina post GDP-proxy data in the coming week. Of the region’s big five economies, only Brazil picked up steam as election-related stimulus spending and tax cuts stoked demand.

Unemployment data from Brazil, Chile and Colombia should underscore the uneven recovery of the region’s labor markets. Brazil’s unemployment rate is below its pre-pandemic level.