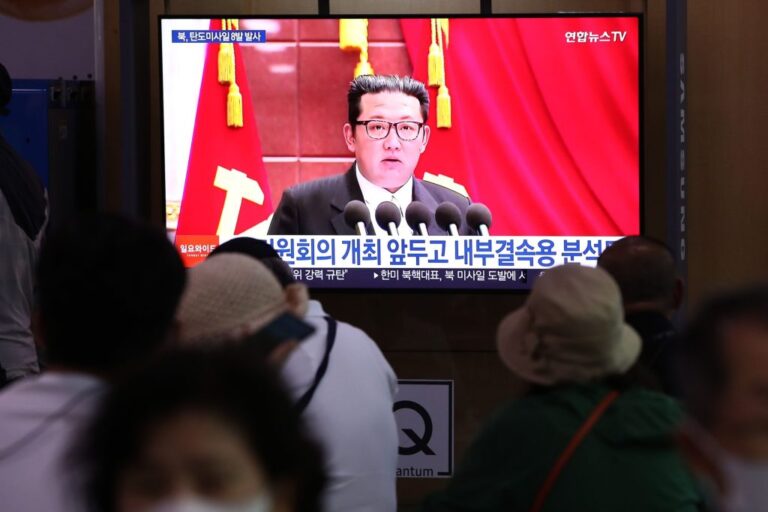 North Korea fired a short-range ballistic missile, marking a return to provocations with US Vice President Kamala Harris due to arrive in the region and as an American aircraft carrier group prepares for naval exercises with South Korea.

The launch on Sunday was its first since shooting off its single-day record of eight at the start of June. At least one short-range ballistic missile was fired from Taechon, about 100 kilometers (60 miles) north of Pyongyang, toward waters off its east coast, South Korea’s military said.

The missile reached an altitude of about 60 kilometers and flew about 600 kilometers, its Joint Chiefs of Staff said. Japanese Defense Minister Defense Minister Yasukazu Hamada said it splashed down outside of the country’s exclusive economic zone after flying on an unusual trajectory.

The flight path provided by South Korea would be consistent with a North Korean short-range ballistic missile. The launch comes as the USS Ronald Reagan aircraft carrier group arrived in South Korea to stage its first combined naval exercises in about five years later this week. Harris will be in Tokyo this week to attend a funeral for former Japanese Prime Minister Shinzo Abe.

Kim Jong Un “had his crosshairs” on the USS Reagan in South Korea and Harris’ upcoming visit, and “probably viewed these events as an opportunity to remind his neighbours of his existence and importantly, the ongoing weapons development,” said Soo Kim, a policy analyst with the Rand Corp. who previously worked at the Central Intelligence Agency.

North Korea has a habit of timing its provocations to political events. The latest launch also takes place about a month after the US and South Korea held the Ulchi Freedom Shield — their biggest joint military exercise in about five years. South Korea’s Joint Chiefs of Staff said in a text message to reporters that the country “is maintaining its readiness posture.” North Korea has for decades denounced joint drills as a prelude to an invasion and it typically doesn’t comment on its launches until at least a day after the fact — if at all.

South Korea convened its National Security Council after the launch. Its presidential office condemned the missile test and said in a statement that it was a “clear violation” of United Nations Security Council resolutions.

The US Indo-Pacific Command said it was aware of the ballistic missile launch. “While we have assessed that this event does not pose an immediate threat to U.S. personnel or territory, or to our allies, the missile launch highlights the destabilizing impact of the DPRK’s unlawful WMD and ballistic missile programs,” it said in a statement, referring to North Korea by its formal name.