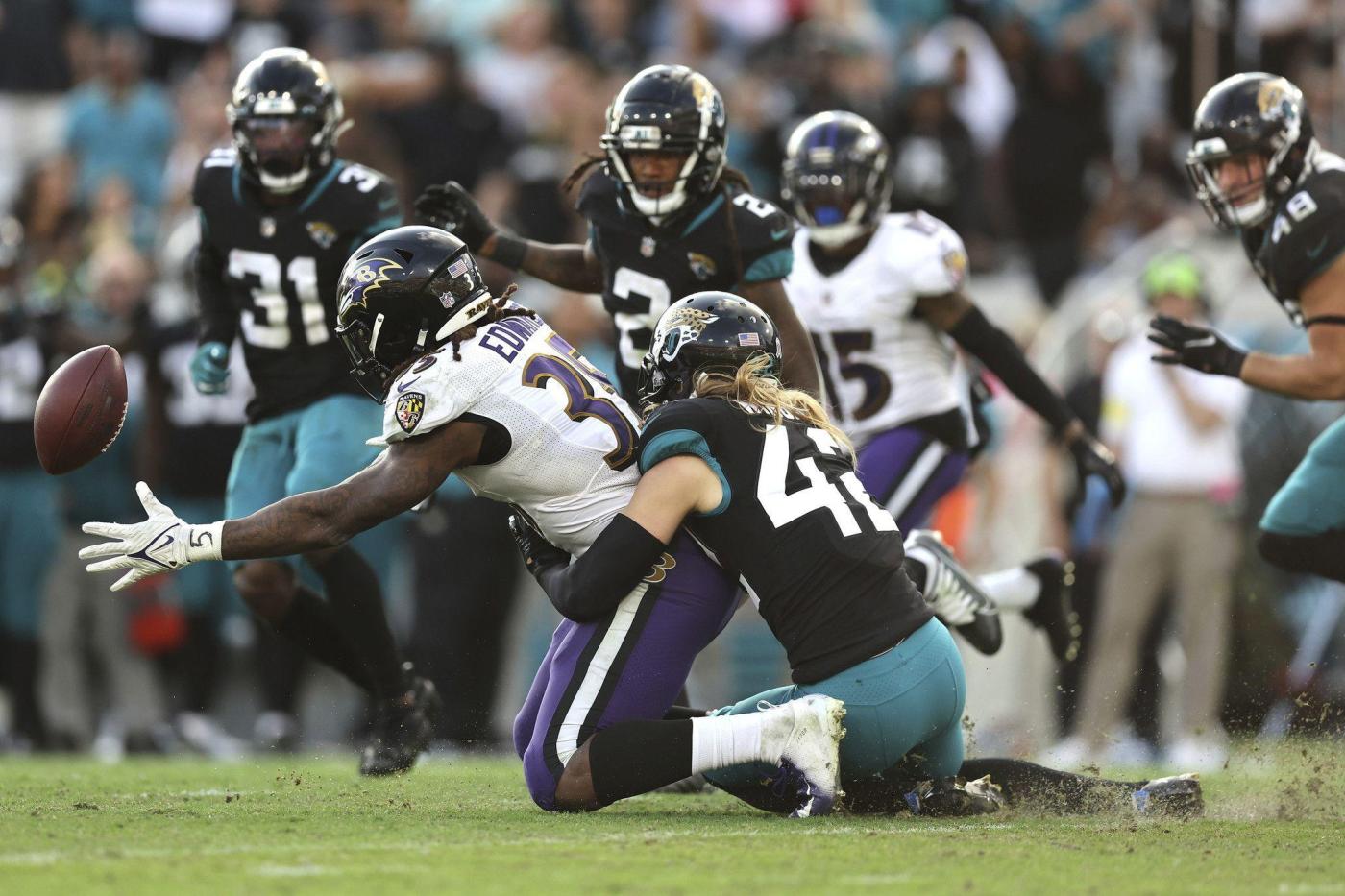 The Ravens finally lived too dangerously to survive, failing to build an advantage over the plucky Jaguars thanks to sloppy offense and allowing Jacksonville quarterback Trevor Lawrence to cut through them in the last two minutes in a 28-27 loss. They’re not exactly a team in crisis, but the good vibes from a four-game winning streak are gone, replaced by serious questions about their viability against the playoff teams they hope to face come January.

If the Ravens left this many cracks for the Jaguars to exploit, how can they expect to hold up against the league’s best come playoff time?

For a split second, as Justin Tucker’s 67-yard field goal attempt moved relentlessly toward the center of the crossbar, it seemed the greatest of kickers might bail the Ravens out on a day when they did not deserve to win.

When Tucker’s kick fell a few yards short, however, the Ravens were left to lie in the hard, chilly bed they had made for themselves. Farewell, four-game winning streak. Farewell, good vibes.

Instead of celebrating a miracle, they confronted the fact that their slipshod offense left a trio of red-zone opportunities unconverted, and their defense — so fearsome in recent weeks — squandered a fourth-quarter lead for the third time this season.

We thought the Ravens would come out of their bye week ready to go on a run against a string of woeful opponents. Instead, they slogged to an unsightly 13-3 win over the Carolina Panthers and plunged headlong into the trap presented by a Jacksonville team that had lost six of its previous seven.

Are the Ravens in crisis again, as they seemed to be after a 3-3 start marked by missed opportunities and second-half collapses? Not exactly. Their defense is too good and their schedule too soft for us to say their playoff push is in peril. But they sure have not been easy to watch the past two weeks.

What else can we say after watching them drop passes and rush to get off misbegotten attempts before the play clock ran out? After watching Lawrence pick on Marcus Peters all afternoon? Even the Ravens’ league-best special teams faltered, with Devin Duvernay handing them pitiful field position via a pair of poorly judged returns.

The problem is not so much that the Ravens lost to a team they should beat. This happens to everyone, and we knew the Jaguars, led by an on-form Lawrence, were live underdogs. No, the worry is that we’ve seen the cracks Jacksonville exploited in all of the Ravens’ losses this season and in some of their victories. Imagine how the Kansas City Chiefs or Buffalo Bills or Miami Dolphins might punish these same failings — the unfinished drives, the mistimed deep strikes, the presnap confusion, the coverage lapses — in January. The Ravens fancy themselves a legitimate contender, but they’re not playing like a team that’s going to outlast the NFL’s best when it matters most. They still have time to tune up but not that much.

Even if the Ravens’ offense isn’t broken, it’s driving on three wheels too often.

A week after they struggled to 13 points against the Panthers, the Ravens took their fans to dark places with another afternoon of follies that kept them out of the end zone.

We cannot say their offense is a lemon. They outgained the Jaguars, 415 yards to 332, and quarterback Lamar Jackson gave them a chance to win with clutch scrambles and a gutsy 62-yard throw to DeSean Jackson to set up a late, go-ahead touchdown. But the Ravens could have avoided these heartburn moments entirely if they had functioned over the first three quarters.

Lamar Jackson hit Mark Andrews for 25 yards off play action on the first snap of the game and narrowly missed Demarcus Robinson for a potential touchdown on the very next play. So the Ravens clearly saw vulnerability in Jacksonville’s pass defense, which was 31st in Football Outsiders’ DVOA coming in.

But they continue to wound themselves with presnap disarray. On that first drive, a delay of game pushed them from second-and-goal at the 10-yard line to second-and-goal at the 15. They ended up with a field goal. Later, in the second quarter, they came up short on a fourth-and-1 sneak after appearing disorganized and rushed at the line of scrimmage.

Offensive coordinator Greg Roman takes some overheated criticism, but it’s fair to call him out for this enduring lack of precision.

The Ravens failed to finish in the red zone again on their second drive when a diving Robinson could not haul in a low zinger from Jackson. The Ravens came in 21st in the league with a 52.6% touchdown rate in the red zone, so it’s a trend that’s holding them back and that could bite them against elite competition in the playoffs.

The upshot was a 7-6 deficit after they’d dominated the first 20 minutes of the game.

The Ravens had another chance at six to start the third quarter, but tight end Josh Oliver could not pull down a high offering from Jackson in the end zone, and they stalled again.

Jackson could not explain why the attack he leads serially fell short: “I don’t know. It looks good in practice.” His frustration seemed to boil over later when he fired an off-color, expletive-laced response at a Twitter critic who said the Ravens would be better off not signing him to a lucrative extension. He has since deleted the tweet.

With the Ravens’ lead at two in the fourth quarter, running back Gus Edwards, whose value as a short-yardage converter is beyond reproach, lost a fumble to hand Jacksonville a go-ahead field goal. The Ravens answered with their only long touchdown drive of the day, highlighted by that Jackson-to-Jackson bomb, but by then, they had left too many points unclaimed.

The loss cost Oliver and defensive end Calais Campbell their chance to celebrate showing out against a former employer.

The experience could have been particularly sweet for Oliver, a 2019 third-round pick whom Jacksonville dumped for a conditional seventh-round pick after a pair of injury-riddled seasons. He’s established a home in Baltimore with violent run blocking, but on Sunday, he flashed the receiving talent that made him a high-upside prospect in the first place. Oliver galloped into clear space along the sideline for a 40-yard grab on the Ravens’ first drive of the second half and finished his day with a 12-yard catch-and-run that could have been the game-winner and another 12-yard catch to set up Tucker’s 67-yard attempt. He led the Ravens in receiving yards with 76, and if he had snagged Jackson’s sailing throw in the end zone in the third quarter, we might have called it a perfect afternoon.

Campbell, by contrast, wasn’t fighting for his NFL life when he moved from Jacksonville to Baltimore. He was a star in one home and expected to remain one in the next. Still, we probably take the 36-year-old man-mountain for granted at times.

He led the surge on a pair of stuffs as the Ravens stopped the Jaguars on third-and-1 and fourth-and-1 on their first defensive series. He flattened Lawrence in the last two minutes, knocking the ball loose on a play that could have ended the game if it had rolled more favorably for the Ravens. Fifteen NFL years in, Campbell still puts his imprint on every game he enters.

In a brief stretch on the sideline, Marlon Humphrey reminded us why he’s the team’s most important defender.

The Jaguars tried to get moving, down nine in the fourth quarter, but Humphrey kept backing them up, sacking Lawrence and dropping wide receiver Christian Kirk for a 5-yard loss on a running attempt. Then, Humphrey twisted his ankle, and the defense was immediately worse, allowing Lawrence to complete four of his next five passes, the last for a touchdown to cut the Ravens’ lead to 19-17.

It’s not as if the Ravens were perfect with Humphrey. He was on the field when Lawrence cut through them in the two-minute drill. But his versatility was on full display against the Jaguars. With Kyle Hamilton sidelined by an ankle injury, Humphrey needed to be the Ravens’ chief answer to Kirk, one of the most productive slot receivers in the league. Sure enough, Lawrence had to look elsewhere as Kirk caught just four passes on nine targets. We’re so used to Humphrey shifting inside seamlessly when duty calls that we might assume every top cornerback can do it. Not so.

On top of his work in coverage, Humphrey has become more of a threat to blitz opposing quarterbacks and blow up plays behind the line of scrimmage. His two tackles for loss against Jacksonville were a career high, and he came into the game with the best pass-rush grade in the secondary, per Pro Football Focus. He was the Ravens’ best all-around defender in their narrow win over the Panthers and again in Jacksonville.

After a modest dip in performance last season, Humphrey is on track for a third Pro Bowl appearance and is making the Ravens look smart for investing in him as their franchise defender.

Lousy as they were in Jacksonville, here’s why the Ravens are still in line to take the AFC North.

It’s a wonderful feeling to be so good that you’re schedule-proof. The Ravens reached this rarefied air for a stretch of their 2019 season. They’re too leaky now. But here’s the thing: So are most NFL teams, including their chief divisional nemesis, the Cincinnati Bengals.

The Bengals did good work while the Ravens came unglued Sunday, holding on for a road victory over the ever-challenging Tennessee Titans. They pulled even with the Ravens at 7-4. But what does the schedule say about next weekend? The Ravens will host the Denver Broncos, who can’t score on their best day and seemed on the verge of a full meltdown in losing 23-10 to the Panthers. The Bengals, meanwhile, will face the Chiefs and Patrick Mahomes, who will surely be eager to serve comeuppance after last season’s playoff upset.

Schedule, schedule, schedule. It determines so much at this stage in the NFL calendar. Care to peek ahead? On Christmas Eve, when the Ravens will host the deeply mediocre Atlanta Falcons, the Bengals will travel to face the New England Patriots and their gnarly defense. On Jan. 2, the day after the Ravens invite the offensively challenged Pittsburgh Steelers to Baltimore, the Bengals will face the Bills.

So yes, Cincinnati has won five of six with an offense that thrives in the red zone rather than self-destructing. Many pundits will spend the coming week telling us they’re set to pass the Ravens in the stretch. Just remember: Context matters.