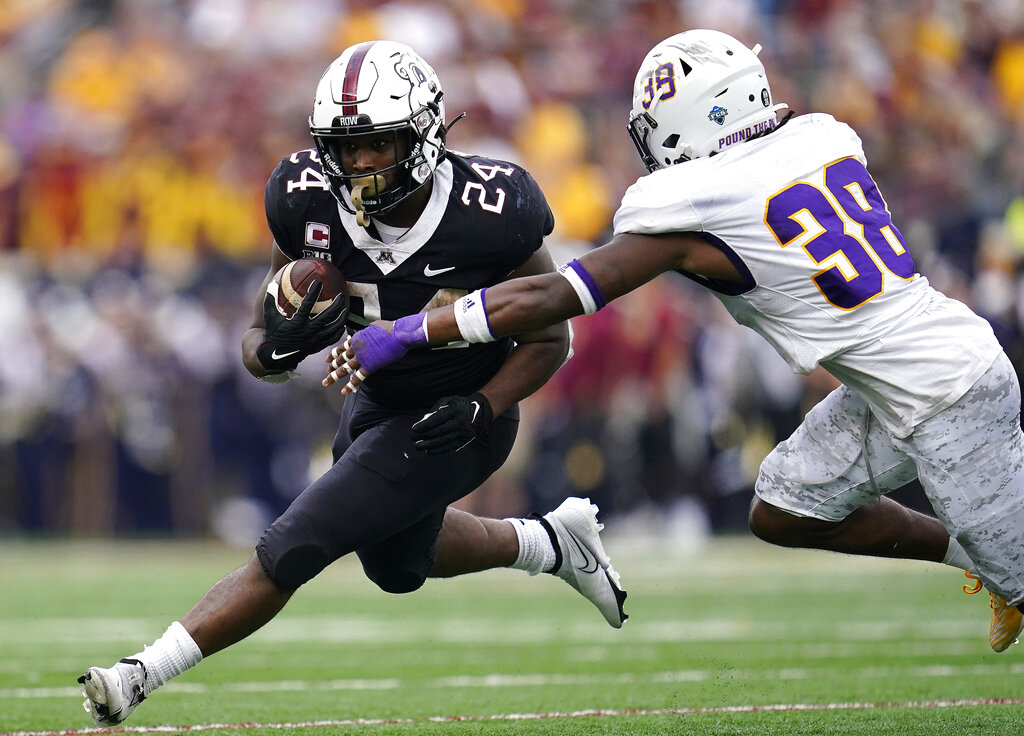 It’s hard to glean just how good the Gophers football team might be after its nonconference schedule, but after three dominate wins, there are a lot of sources of encouragement.

The sample size will continue to grow, as will the caliber of opposition starting this weekend. Minnesota (3-0) heads into the Big Ten opener against Michigan State (2-1) at 2:30 p.m. Saturday at Spartan Stadium in East Lansing, Mich.

“It’s going to be, again, a jump for us from a competition standpoint; there is no other way to say it,” Gophers offensive coordinator Kirk Ciarrocca shared Wednesday. “I’m excited to see where we are at.”

Here’s a look at what the numbers say about Minnesota after 25 percent of the season:

BEST, ABOVE AVERAGE
AND RELATIVELY LOW

Pro Football Focus College grades each phase of the game, providing a window into how each area has been performing this season.

After easy wins over New Mexico State, Western Illinois and Colorado, Minnesota has emerged as the darling of the popular analytic and grading site. The Gophers have the top overall grade (97.8) given out by PFF.

A rushing total of 314 yards would be pretty impressive through three games, given its healthy average of 100-plus yards.

But that number represents Mo Ibrahim’s yardage total after contact.

The generously listed 5-foot-10, 210-pound tailback has been trucking opponents through three games. He has 464 total yards and seven touchdowns.

Obviously his low center of gravity helps with contact, but it’s also his ability to avoid the brunt of the contact and then continuing to move his feet after getting hit.

Head coach P.J. Fleck explained to the Pioneer Press some of the intangibles to Ibrahim’s ability after contact.

“He’s better if you hit him,” Fleck said. “(Defenses) are making sure they have a first, second and third level to get him on the ground. He is getting through the first and second level and getting tackled by the third.

“But I think he is so low to the ground and he has a great understanding of center of gravity,” Fleck said. “He knows where the hits are going to come from (from). He has great vision. He can anticipate it. He can move his body to absorb the hit but also stay on his feet. … He can spin out of it, run through it, go up and through it, jump-cut it, stop to break that particular tackle.”

Those are just outlandish numbers. Over the past five years, the best offenses convert just under 60 percent of the time, and the best defenses are, at best, around 27 percent.

In other words, this level is unsustainable, but this type of start could be a precursor to being among the best come December.

Gophers defensive coordinator Joe Rossi said the success comes down to attention to detail and execution. For Ciarrocca, he will need to find who is best in the passing game on third down now that top target Chris Autman-Bell suffered a season-ending injury.

PFF College has pegged four Gophers as the best at their position among competition within Power Five Conferences.

Spann-Ford is Minnesota’s No. 2 pass catcher and target thus far, and his share of passes thrown his way is expected to up with Autman-Bell out.

“He’s becoming a complete tight end,” Fleck said Monday. “… Brevyn is playing at a high level. But Brevyn also has to finish a catch that turns into an interception (vs. Colorado). Brevyn has to be able to finish some blocks that he knows he can finish. His pad level has got to get lower. His first step can get better. His hand placement can be better. But he’s playing at a high level.”

Smith is responsible for two of the U’s three takeaways — an interception versus New Mexico State and a forced fumble on a sack against Colorado. Rossi praised his fundamentals.

“I think he’s playing at a really high level, and we need him, especially this week, especially against the offensive weapons (of Michigan State),” Rossi said. “He needs to continue to improve and be a guy that we can count on.”