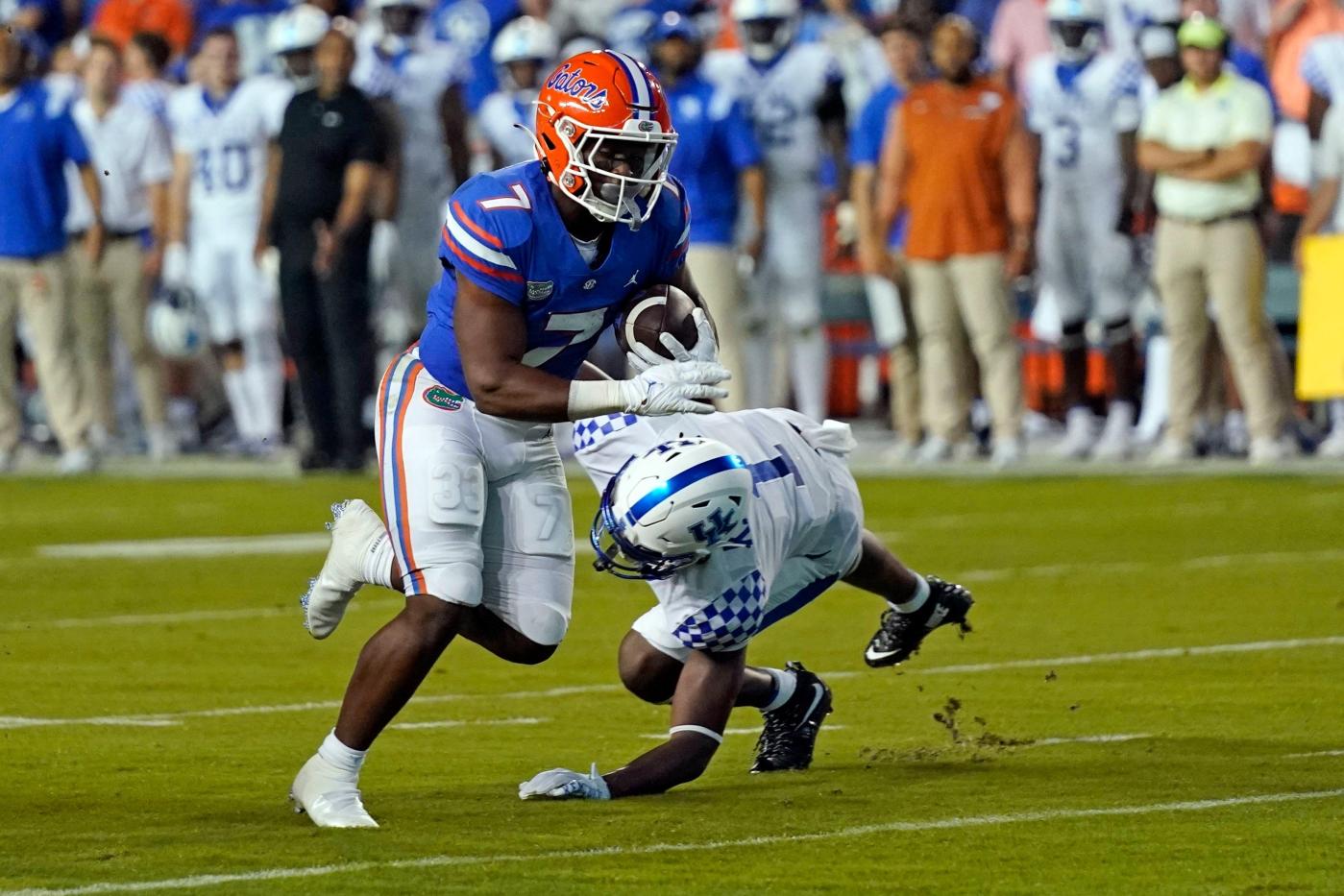 Florida coach Billy Napier has made no bones that he wants his offense to be predicated on the ground game.

It’s the same approach he took while coaching at Louisiana, where the Ragin’ Cajuns finished among the top rushing teams in the country every season from 2018-21.

The Gators have been slow out of the gates, averaging 205 yards through the first two games, but what’s stood out is the distribution of the football. Three tailbacks are averaging at least 17 carries and 103 yards, led by sophomore transfer Montrell Johnson Jr. (137 yards), Trevor Etienne (110) and Nay’Quan Wright (63).

“We’re very much a running back by committee group,” said Napier. “That’s been our philosophy for a long time. We’ve been one of the best rushing teams in the country. Those players have gone on to play in the National Football League. Montrell, Trevor and Nay’Quan are guys that are next up.

“The good thing about that room is those guys are selfless; they’ve got a great attitude and work hard each day.”

“He looks just like Travis did at Clemson, except I don’t know that Travis looked like that as a true freshman watching him play this past week,” said Scott. “He’s already a big kind of playmaker for them.”

“Trevor, in particular, is learning more and more as a rookie player, but Nay’Quan provides leadership and Montrell is still a young player but played in our system last year,” added Napier.

Johnson was one of three running backs with at least 100 carries, at least 500 yards rushing and at least 8 touchdowns for Louisiana last season. The true freshman finished with a team-high in carries (162), rushing touchdowns (12), and 838 yards.

Preparing for the Swamp

One advantage Florida has been afforded through the first two games has been the home crowd at the Swamp.

According to the latest NCAA figures, the Gators have averaged 90,396 fans, with Ben Hill Griffin Stadium filled to capacity.

Scott is anticipating the same atmosphere when USF takes the field Saturday, and the challenge this week has been preparing the Bulls for what to expect.

“I’m looking forward to seeing how our guys handle the crowd noise,” said Scott. “This will be our first road game of the year and I’m expecting it to be as loud as it always is there.”

USF has been working on handling the crowd noise throughout the week, trying to recreate similar conditions by pumping in noise through speakers near the practice fields.

“You’ve got to change up how you do your snap count,” Scott explained. “You can’t go with a verbal cadence. A lot of it has got to be eye contact with each other and sometimes hand signals. It’s just a little bit different from when you’re playing at home.”

This article first appeared on OrlandoSentinel.com. Email Matt Murschel at [email protected] or follow him on Twitter at @osmattmurschel.