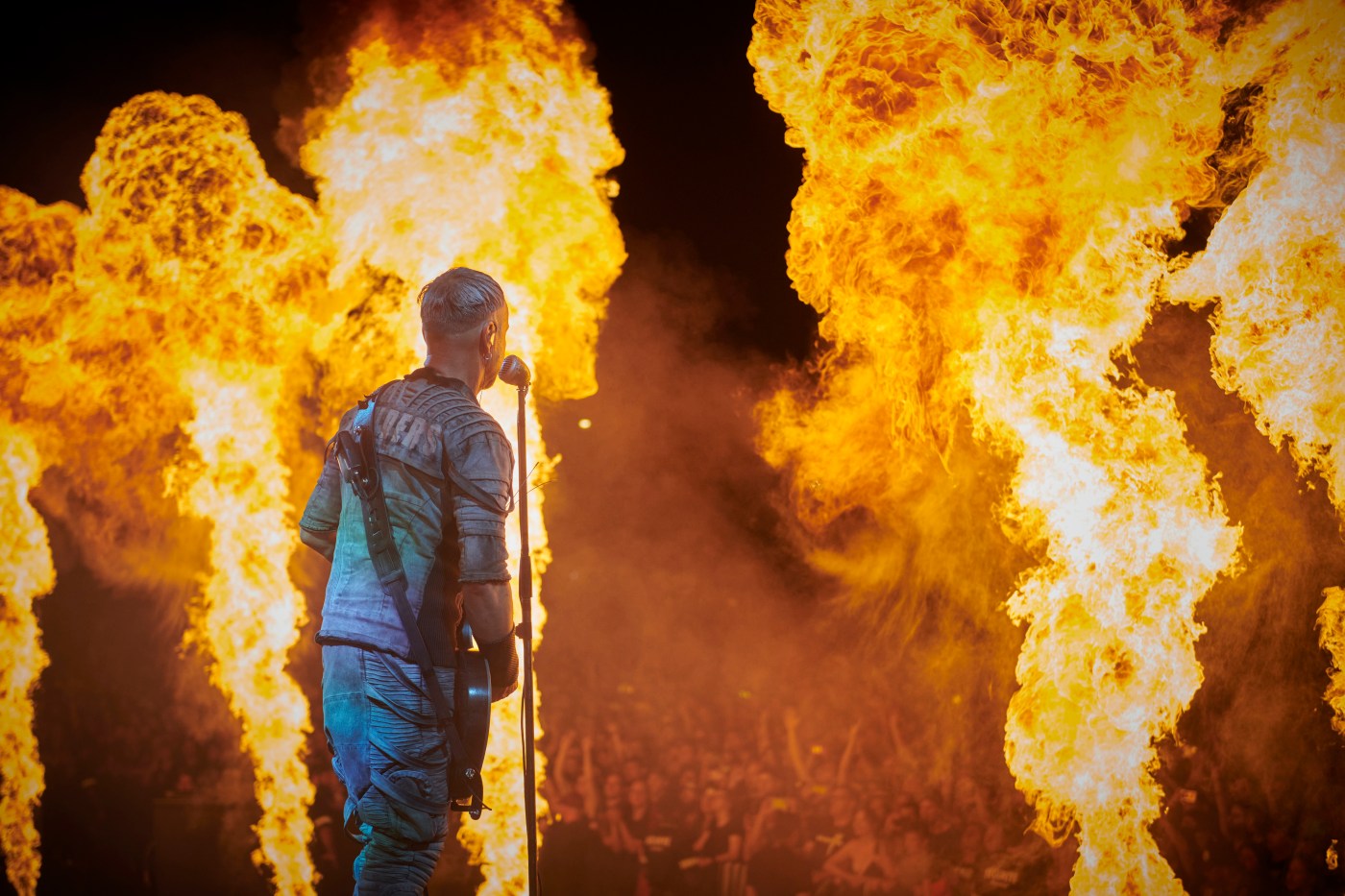 In the 31 months since German industrial metal band Rammstein announced they would headline U.S. Bank Stadium, nearly every conversation I’ve had about the show has started with either “Wait, what?” or “Who?”

The easiest way to describe it is that Rammstein is like the Grateful Dead back in the day, or Tool and Phish more recently. They exist in their own world, free from the typical “rules” of rock and roll. Their lyrics are almost entirely in German and the closest thing they have to a hit on these shores is 1997’s “Du hast,” released a few years after the band formed.

Rammstein also likes to play with fire, so much so that fans long ago coined the motto “Other bands play, Rammstein burns!” So much so that lead singer Till Lindemann, who sometimes sings entire songs while engulfed in flames, is a licensed pyrotechnician. So much so that the current tour is using 1,350 tons of custom equipment to create an enormous, industrial castle-like stage — with Art Deco/Fritz Lang’s “Metropolis”-style flourishes — quite unlike anything else ever seen at USBS. (In terms of sheer shock-and-awe spectacle it’s up there with the likes of U2’s 360 Tour in 2011 and Beyonce’s Formation World Tour five years later, both at the former TCF Bank Stadium.)

Saturday night’s show, twice postponed due to the pandemic, opened with band members emerging from beneath the stage amid exploding pyro and belching smoke. The more than two hours that followed wasn’t a performance as much as a total and complete assault on the senses.

Take, for example, “Puppe,” a song about a doll-loving child who kills the guy who murdered the child’s prostitute sister. During the performance, an oversize baby carriage appeared onstage and, during the choruses, it erupted in flames as black confetti showered the screaming crowd. For “Mein Teil,” Lindemann dressed in a blood-splattered butcher’s apron, growled into a microphone with a knife attached and used a flamethrower (and then a flame-shooting cannon) to “roast” a cooking pot with bandmate Christian “Flake” Lorenz inside (and playing keyboards all the while).

Oh, and it was loud, possibly even louder than Metallica’s infamous USBS show on opening weekend in 2016. And the audience could feel the heat from those flames, particularly when they shot out of two satellite towers near the back of the main floor.

If it sounds like a horror show, well, it was, in the best possible way. Both Rammstein and the audience were fully aware none of it was serious, but rather just a ridiculously over-the-top, often theatrical celebration of mayhem. For all the shooting flames, gore and phallic imagery (and there was a lot of phallic imagery), Rammstein delivered it with an arched brow, a wink and a smile. The band has always gone the distance in creating not just a concert, but a world-building experience full of darkly camp turns and knowing nods, right down to their choice of the opening act Duo Abelard, a pair of classically trained French concert pianists who performed instrumental versions of Rammstein songs.

Given the size of the stage, Rammstein couldn’t do it anywhere else but in stadiums. The big question was just how many people would show up. For most of the past two decades, the band has focused primarily on Europe and the rest of the world. Their most recent Twin Cities show was a decade ago at Target Center and drew a crowd of about 6,000.

But by largely ignoring this country, Rammstein has managed to turn their rare domestic visits into destination events that fans travel hundreds, if not thousands, of miles to attend. Minneapolis is one of just nine cities on the band’s North American tour and there were clearly plenty of out-of-towners in the audience.

For a niche act, Rammstein drew an impressive crowd of just under 30,000 people. Once those folks get over their ringing ears and smoke-induced coughing, they’ll be talking about this show for a long time.