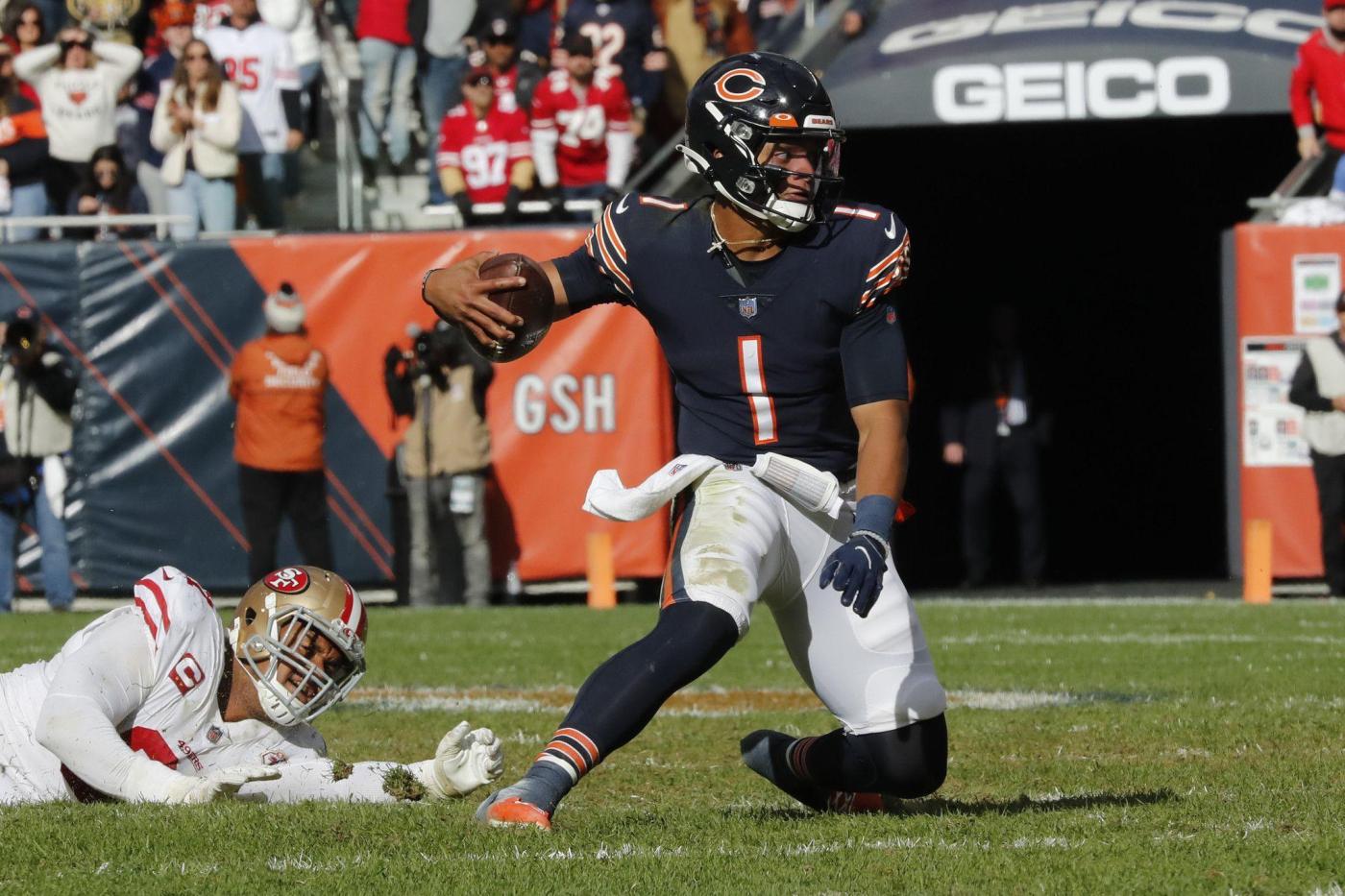 Jaylon Johnson understands what Sunday is. For the new-look Chicago Bears, a Week 1 game against the San Francisco 49ers provides an opportunity to begin the season under a new coaching staff with a new methodology for pursuing greatness.

What better way to test the progress that has been made and the standards that have been set than with a home game against an opponent that played for the NFC championship in January.

“We’re kind of testing the waters,” Johnson said before practice Thursday at Halas Hall. “We’ve seen during the spring and during training camp all the preparation that we’ve been putting in. Even in the preseason, we’ve gotten a few glimpses of it, getting in for a few plays and a few series.

“So now? It’s the real thing. You’re ready to go and excited to see what our defense can be, what this team can be and what type of players we have here and what we’re going to be all about.”

That’s a big part of what Sunday’s opener at Soldier Field will be. It’s an early test of this team’s DNA, an opportunity to establish an identity.

“There are a lot of unknowns,” Johnson said. “But I’m excited.”

With the unknowns, there has been a continuous flow of positive energy inside the Halas Hall locker room from a core group of players who believe in the cohesion and collective work habits that have been solidified.

“I have a lot of faith in the guys around me and our coaching staff,” tight end Cole Kmet said. “I feel really good about where we are and where we’re going. … You see the buy-in. It has been growing each and every week.”

Buy-in. That’s a concept the Bears have talking about openly since training camp opened in July. But what is it exactly players have bought into?

“The H.I.T.S. principle,” Kmet said. “I know that sounds corny, but that’s what it is. That’s how we’re graded when they look at the film, and (the buy-in) is evident on the tape.”

H.I.T.S. is coach Matt Eberflus’ four-letter reminder for how this team should establish its way of life.

Hustle. Intensity. Taking the football away on defense and taking care of it on offense. Situational smarts. This has become central to the Bears’ daily mission.

“It’s the culture shift,” he said. “It’s everything this staff is trying to ingrain into our heads as to what our new normal is. It’s not easy to do. And there have been plenty of opportunities for guys not to buy in or to not really commit to pushing themselves mentally and physically.

“But I feel like, from head to toe, from our leaders to the rookies to everyone else in between, we’ve all bought in.”

What is that new normal?

“It’s a daily expectation,” Johnson said. “And that expectation was set from Day 1. (On defense) it’s running to the ball, trying to create turnovers, raking at the ball, punching at the ball. … It’s been preached from Day 1. So that’s what it is for us now, just going after that — playing hard and playing the right way.”

Maybe the 2022 Bears have a little something extra. That’s what fans across Chicago are hoping. With a roster that many around the league judge as bottom-tier, perhaps the Bears can find some of those fueling intangibles — increased chemistry, extra effort, youthful pluck — to become one of this season’s fun surprises.

The biggest dreamers in the outside world can set visions of a shock-the-world playoff appearance. Almost no one inside the NFL orbit sees that as likely.

But even if the Bears suffer through another sub-.500 season, they can establish direction and make meaningful strides toward becoming a championship contender.

Truthfully, this team’s most realistic goals should be to establish itself as functional and competitive and to create momentum that pushes into 2023 and beyond.

In many ways, this season will be a less about the final record and more about the eye test.

Are the silly penalties reduced? Are the in-game coaching decisions cleaner?

Is effort packed into every game?

Is the defense flying around with controlled aggression and making game-changing plays on a regular basis?

Is the offense, led by second-year quarterback Justin Fields, continually showing signs that it’s moving up the development staircase rather than stepping onto the down escalator?

Offensive coordinator Luke Getsy has emphasized with his players the need to quickly establish “our style of play” in Week 1.

And what should that look like to Bears fans?

“You want to see guys who are firing off the football, who are finishing, (who are) playing the play longer than everybody else,” Getsy said. “And then (you want to see that) we’re taking care of the football. We sit on those three principles pretty much every single day.”

These are all little things that can help the Bears compensate for the talent and depth deficiencies that will leave them with a thin margin for error most weeks. That includes Sunday, when they’ll walk into the opener as six-point home underdogs.

That’s how steep this climb figures to be for a team that overhauled its roster in such an extreme manner. When practice began Thursday, the 53-man roster included 34 players who weren’t with the team when last season ended, 15 who weren’t even in the NFL yet and seven who walked into Halas Hall for the first time last week. As if more evidence was needed to confirm this is a team in transition.

Those who make a living in the football forecasting business have the Bears as a 15-1 long shot to win their division and an 80-1 pipe dream to reach the Super Bowl. Oddsmakers set the over/under for the Bears win total at 6½.

Consider all of that a measure of what most of the football world sees from afar.

‘We can do that here’

Those compelled to reach for grand best-case scenarios will passionately point out that prognostications often prove erratic.

Last year at this time, they’ll argue, the Cincinnati Bengals were long shots even to remain in the “In the hunt” playoff graphics deep into December. Yet with two minutes remaining in Super Bowl LVI, they had a 20-16 lead on the Los Angeles Rams.

That’s why the NFL is so magnetic, with every season providing spectacular twists and surprise breakthroughs. Heck, four years ago, the last time the Bears changed coaches, they made everyone’s head spin with a worst-to-first 12-4 season and division championship. That roster was so different from this one — more talented, deeper and much more established.

But, hey, who knows?

In the first week of training camp, offensive tackle Riley Reiff was asked about his experience with last season’s Bengals and how that gritty young team surpassed expectations so dramatically.

“We had a good group of guys,” Reiff said. “We jelled. The coaching staff put us in good situations.

“It was a fun year. It was something I won’t take for granted ever. We had a fun time and we worked hard. We didn’t talk about the Super Bowl. We just started stacking good practices after good practices. I think we can do that here.”

Reiff also saw how second-year quarterback Joe Burrow motivated important breakthroughs for both himself and the team.

“Joe Burrow is an awesome guy,” Reiff said. “Tough, smart. I see a lot of that in Justin (Fields). They just come out to work every day. They are good guys, good humans. They study and they take control of things. Joe really took control of our offense last year. And I see that in Justin so far too.”

It’s understandable for the most loyal fans to bite that hook before the first game has been played. But internally, the Bears’ expectation is to retain a microfocus on each day, to find purpose within every practice and every drill, to make significant improvements that carry the team toward a brighter future.

On the eve of the season opener, there is buy-in and excitement. The fun part will be measuring how it all translates.