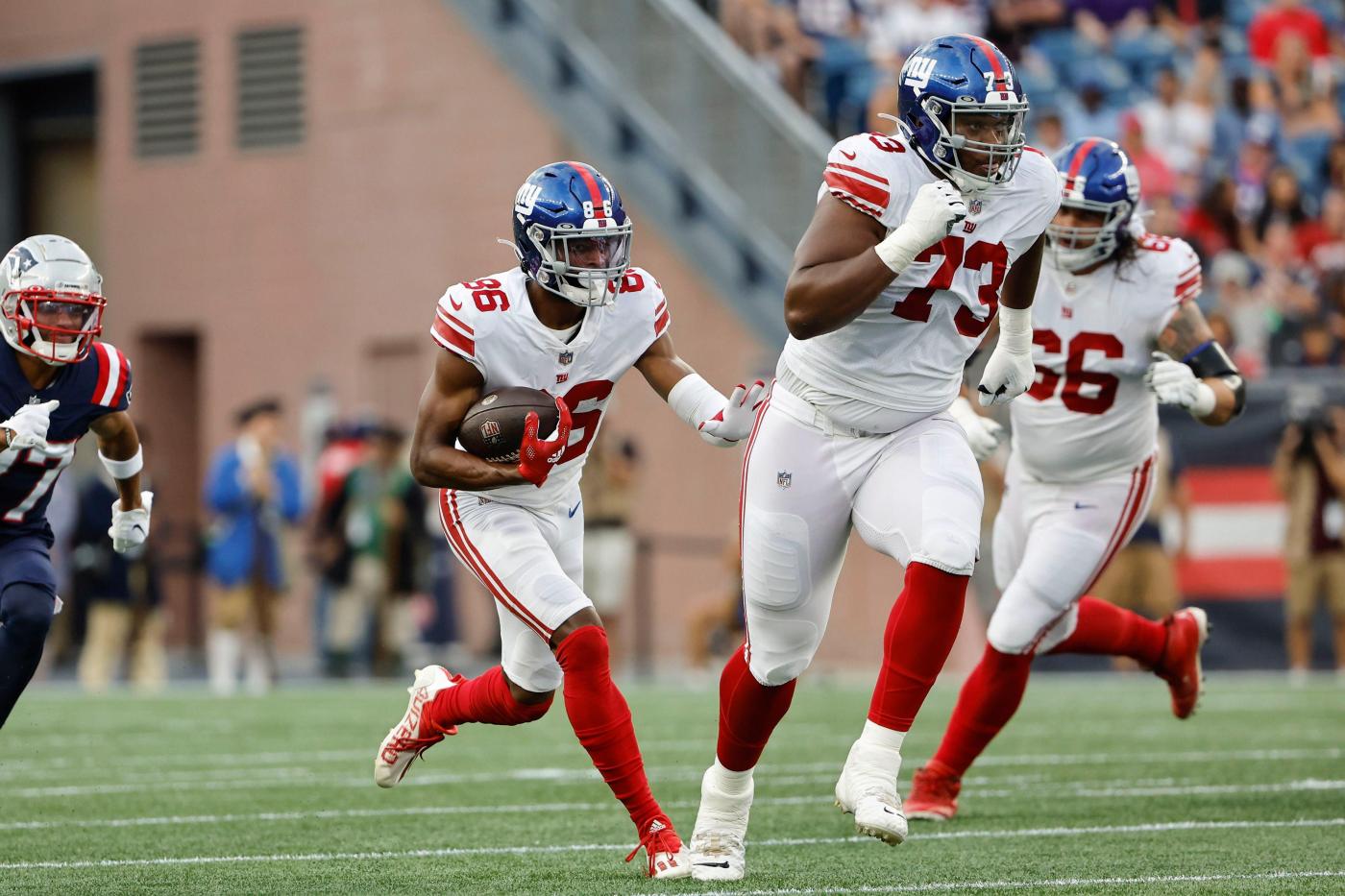 Giants wide receiver Darius Slayton had a sense of humor Tuesday about the trade rumors swirling around him.

“Their job is to do what’s best for this team,” Slayton said of the Giants. “If the Rams called and were like, ‘We’ll give you Aaron Donald for Darius Slayton,’ I mean, I’d make that trade, too. They field the calls ‘cause that’s their job. So I don’t take that personally, no.”

Slayton laughed when asked if that Donald-Slayton trade might have to include a draft pick on top.

“Nah,” he said. “If they said player for player, I’d book the flight myself and say I can’t blame them.”

Slayton did have a chance to meet with head coach Brian Daboll, GM Joe Schoen and other coaches after making the team’s initial 53-man roster. And they spoke about Monday’s ESPN report that the Giants have received trade inquiries on Slayton.

“I mean it came up obviously, just because it is public,” Slayton said. “Anything Adam Schefter tweets, everybody knows. But at the end of the day, if people are calling them about me, that’s them – they can’t really do anything about being called.”

Slayton said he didn’t receive clarity on whether the Giants themselves were trying to drum up his trade market, but he added: “If I had to guess, I would guess that wasn’t the case, though, you know?”

Daboll said “we’ll see” when asked if he expects Slayton to be on the Giants’ Week 1 roster. He had said on Monday that Schoen was “open for business.”

“We’ll see where we’re at right now,” the coach said. “We had a good conversation with Darius about expectations and role. He’s done a good job and we’re excited to have him.”

Daboll said every offensive player met on Tuesday with “some of the decision makers, myself, Joe, coordinator, position coach, special teams coordinator.” The purpose of the meeting was to define “clear expectations,” create “strong alignment” and open it up to questions.

“I think that’s good for communication purposes with guys on the team,” Daboll said.

The coach also said that right before Slayton’s hamstring injury during the Patriots preseason opener, “he was doing a good job at practice. You could see his speed.”

Several players, including Webb, Corbin and Allen, are expected back on the practice squad (assuming the young players clear waivers).

“It’s one of the toughest days in the NFL,” left tackle Andrew Thomas said. “You see guys put blood, sweat and tears into this game, and then just the way of the business, they don’t make it. It sucks. You have relationships with guys … But we’ll try to roll with what we’ve got and move from there.”

Here are the 53 players who stuck around, at least for now. Daboll acknowledged “there’s probably a few” players headed for injured reserve. He expects more clarity on the roster Wednesday and Thursday:

LOVE EMOTIONAL, NAMED ONE OF 10 CAPTAINS

The Giants’ players voted 10 team captains for the 2022 season: Jones, Barkley and Thomas on offense; McKinney, Lawrence, Williams on defense; Kreiter, Gano and Brown on special teams; and Love for both defense and special teams.

“It means an awful lot to me,” Love said. “I’ve never been a captain in my entire life, and to do it for the Giants of all places, at the highest level, it’s hard not to get emotional about it. People have always wanted me to be more outspoken, wanted me to be the rah-rah guy, wanted me to be the muscle head, all that stuff. But this team has appreciated me for staying true to myself. And so I’m extremely grateful.”

BELTON ON WAY BACK

Rookie third-round safety Dane Belton (broken collarbone) had his helmet on and was practicing leaping interceptions during individuals at the start of practice. His red jersey indicated he has changed his number to No. 24, from the 36 he was initially assigned. Belton got hurt early in training camp, but he is trending in the right direction to contributing early this season.

There were six players missing from Tuesday’s 1:45 p.m. practice: Thibodeaux (sprained right MCL), Ojulari (right calf), Smith (right foot), Lemieux (left foot), Myarick (undisclosed) and Williams (undisclosed). Bellinger (concussion) was on the field but not practicing. Platzgummer (concussion) is in the protocol, too.