In rematch with Dolphins, Ravens and Lamar Jackson seek new answers against the blitz – Twin Cities 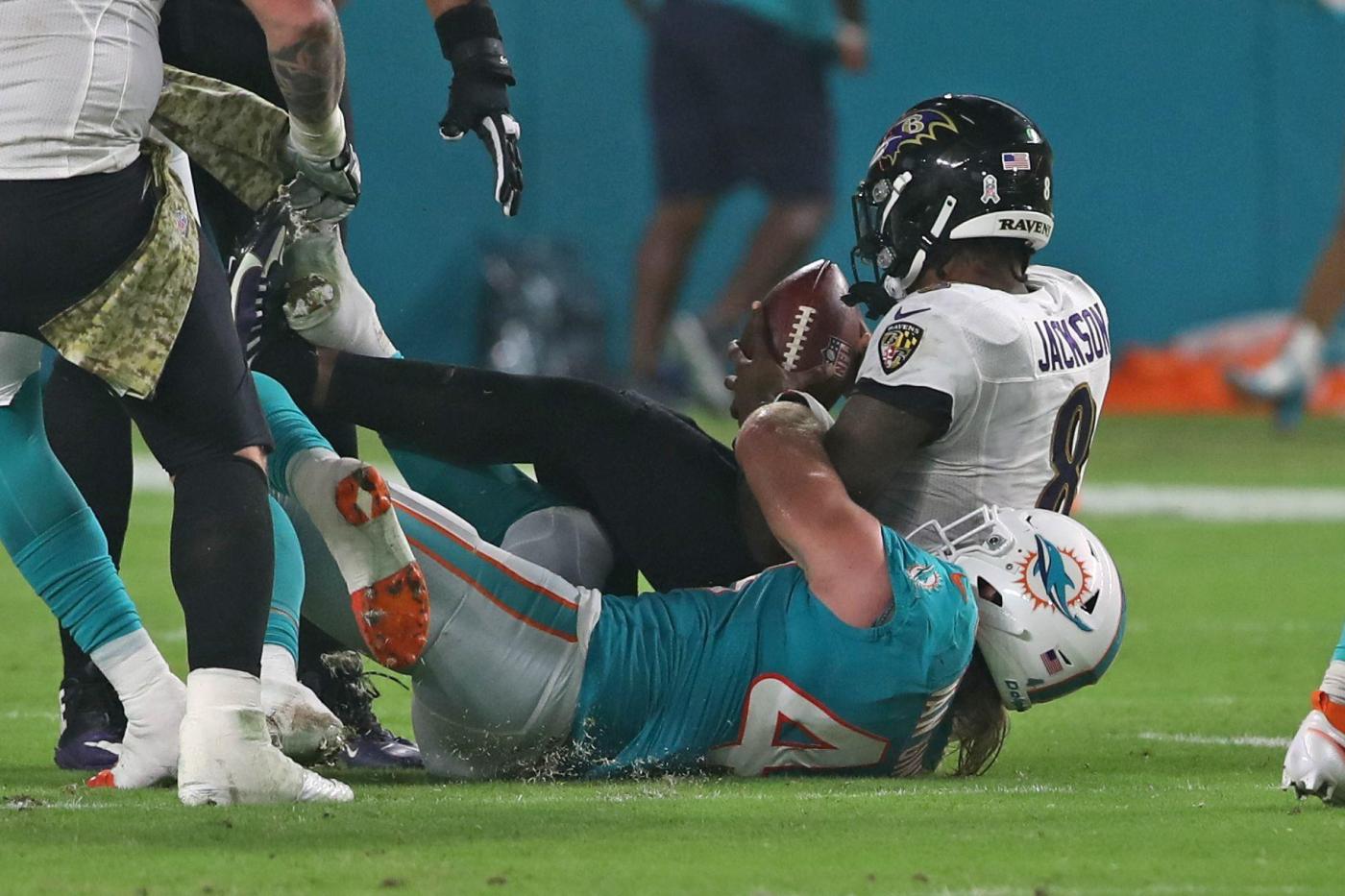 He’d rallied the Ravens from a two-touchdown deficit against the Minnesota Vikings, throwing for 266 yards, running for another 120 and leading a 10-play drive to clinch the game in overtime. Eight weeks into the 2021 season, the Ravens stood 6-2, and it was not hard to find analysts who believed their quarterback was the league’s Most Valuable Player.

Jackson was back in his old South Florida stomping ground on a Thursday night, ready to add luster to his campaign as a national audience bore witness.

The Miami Dolphins, 2-7 coming in and hardly a defensive terror, had radically different notions of how the evening would unfold. From the first series, they crowded the line of scrimmage with eight defenders. Whether they actually rushed six or seven or just teased the possibility, they were daring Jackson to react quickly and precisely enough to punish them.

He could not. He took four sacks, threw an interception, converted on two of 14 third downs and did not lead the Ravens to a touchdown until deep in the fourth quarter. Cover 0, the man-to-man, blitz-happy alignment that pulls a safety from zone coverage to overload the line of scrimmage, became the new buzz term in the Jackson-stopping business.

On paper, the Ravens’ season did not end with their dispiriting 22-10 loss in Miami. They would get to 8-3 and hold the AFC’s No. 1 seed after 12 weeks. But their offense was never the same, scoring more than 22 points just once over the last nine weeks after they’d averaged 28 over the first eight games. Jackson became a more nervous quarterback, rushing throws and taking sacks as his protection failed.

As the Ravens prepare for a rematch with the Dolphins in their home opener Sunday, they hope they have left the demons of 2021 behind. But until Jackson thrives against the style of defense Miami plays, doubts will linger.

“They just caught us off guard, really,” Jackson said, reflecting on last year’s matchup. “We hadn’t really gone over defenses doing all-up zero against us — like, just all-up flat-out zero. But I feel like we’ll have an answer for it this year. We watched film — watched a lot of film on those guys — because we don’t want it to happen again.”

The Dolphins subsequently replaced their defense-oriented head coach, Brian Flores, with offense-first Mike McDaniel, but they retained coordinator Josh Boyer (McDaniel refers to him as the head coach of the defense) and all of their key defenders, so there’s little reason to believe their approach will change. If the Ravens struggle this time around, it won’t be for lack of concocting and practicing counterattacks.

“We would have been negligent if we hadn’t worked on it,” Ravens coach John Harbaugh said with a self-deprecating laugh. “It was something we needed to get a lot better at, and we studied it the whole offseason. We’ll have a plan for it and hope it works, because these guys are probably the best in the league at doing it right now. They do it more than anybody, they do it better than anybody and it’s just something they’re committed to.”

The Ravens had their chances last November to make Miami pay for its approach. On the first drive of the game, they faced third-and-long with eight Dolphins hugging the line of scrimmage. The offensive line did its job. Jackson shuffled away from Miami’s lone free rusher and unleashed a pass downfield to Sammy Watkins, who’d zipped past his sole defender. Whether Watkins lost the ball in the lights or thought he could not reach it, he pulled up as Jackson’s pass landed a few feet from him in the back of the end zone.

It was a missed opportunity, not just for the points left on the table but for the chill it might have created in Miami’s ultra-aggressive defenders. Instead of hesitating a step in the wake of a 28-yard touchdown from Jackson to Watkins, they grew bolder as the game went on.

“It slows the defense down from blitzing, and it makes the safeties stay back, the corners stay back, and it just lets us do our thing,” Jackson said of connecting on an early downfield throw, as he almost did in the loss to the Dolphins. “Underneath, we might get some runs here, get some underneath passes here. And if they come up, we’re throwing the ball again, over the top.”

Instead of coasting on that positive chain reaction, the Ravens resorted to a series of check-down throws and inefficient handoffs on first and second down. Miami’s blitzes smothered Jackson the scrambler in addition to Jackson the passer. When the Ravens called plays that might have worked, their execution often faltered. Jackson threw low or behind receivers. He rushed plays that required him to set up a defender. Backs missed blocking assignments. Pass catchers dropped balls and did not adjust their routes to offer better targets. Jackson rediscovered some rhythm in the fourth quarter, but by then, it was too late.

“That was certainly one where there were a lot of things we could have done better — coaching, playing, whatever,” offensive coordinator Greg Roman said. “But it’s something you’ve got to look at with a coldblooded mentality. You can’t get emotional about it. You’ve got to look at it strategically and fundamentally and figure out how you can fix certain things, explain certain things better, how to practice things a little bit better.”

The Ravens know they need to hit on a few big strikes in the rematch, much as they did in Week 1 when their offense found its footing in the third quarter against the New York Jets. A 17-yard touchdown pass from Jackson to Devin Duvernay gave them a commanding lead, and a 55-yard connection with Rashod Bateman put the game away.

Those exact plays might not work against Miami, Harbaugh said, but the Ravens will have to find other ways to achieve similar results.

“It certainly builds confidence,” he said. “You’d love to hurt them that way. That’s the idea, hurt them any way you can in terms of that, and we’ll have different ideas in terms of how to do that, and I’m sure that they’ll be preparing for those things as well.”

Slow-developing routes might not be the ticket. Receivers will have to separate quickly, a challenge Bateman, who’s known for his sharp releases from the line of scrimmage, relishes. “It’s just having a plan and knowing what you’re doing,” he said. “Just play fast.”

He was the team’s most productive receiver in Miami last season, catching six passes on eight targets for 80 yards.

Roman noted that the Dolphins are just as capable of playing patiently as attacking. Plenty of times in last year’s game, they showed Cover 0, only to drop two defenders into coverage to muddle the middle of the field.

“But if they’re going to roll the dice on having everybody up,” he said, “you’ve got to hit ‘em.”