The risk of civil unrest has spiked across the globe as developed nations and emerging markets alike grapple with spiralling inflation and upheaval exacerbated by Russia’s invasion of Ukraine, according to a report.

Of 198 countries tracked in the Civil Unrest Index, 101 showed mounting risk in the third quarter of 2022, according to research collected by intelligence firm Verisk Maplecroft. That’s the biggest increase since the ranking was developed in 2016, it showed.

The potential for unrest is rising across Europe, which is bracing for a long winter of energy disruption because of the war in Ukraine — as well as the developing world, where price spikes on basic staples have triggered concern of a global food crisis. The threat is set to grow over the coming months, researchers say. 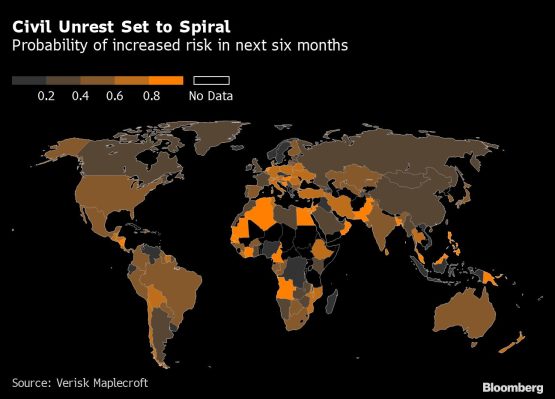 Particularly in developed nations, civil unrest could take the form of demonstrations and labor strikes with the potential to tear at nations’ social fabric.

“These are significant events in terms of disrupting every day life,” Jimena Blanco, chief analyst for Verisk Maplecroft, said in an interview. In emerging markets, worst-case scenarios may involve “rioting, looting, even attempts to overthrow the government,” she said.

Global inflation is likely to linger for months, with no prospect of returning to levels before the twin shocks of the Covid-19 pandemic and the war in Ukraine — even if consumer-price inflation is set to ease somewhat in the second half.

As for civil unrest, while Verisk researchers predicted an increase in risk in 2020, the jump shown by research has been “far worse” than initially forecast, the report said. Inflation levels mean that almost half of countries on the index are categorised as “high” or “extreme” risk levels.

The mounting potential for unrest is likely only to be addressed with a “significant reduction” in food and energy prices, the report showed. But weather is also a factor, particularly in Europe, where a cold heating season would exacerbate the continent’s energy crunch.

Wealthy nations such as Germany, where the prospect of energy shortages has played out in higher gas and electricity bills and the specter of rolling blackouts, show an uptick. Even Switzerland, where inflation is at a three-decade high and officials warn of high prices lingering, registered an increase, the research showed.

Hot spots among developing nations include Sri Lanka, where widespread protests over fuel shortages and mismanagement toppled its government this year, as the country negotiates a bailout. Algeria, where gas revenue has staved off spending cuts, showed the biggest potential for risk in the next six months, researchers said.

Many nations that were able to prop up their economies through the pandemic are now struggling to maintain social spending. Those include Egypt, Bolivia, the Philippines, Serbia, Zimbabwe and Bosnia-Herzegovina.

The index is derived from a range of surveys assessing factors like inflation, mechanisms to overcome conflict and the impact of unrest.