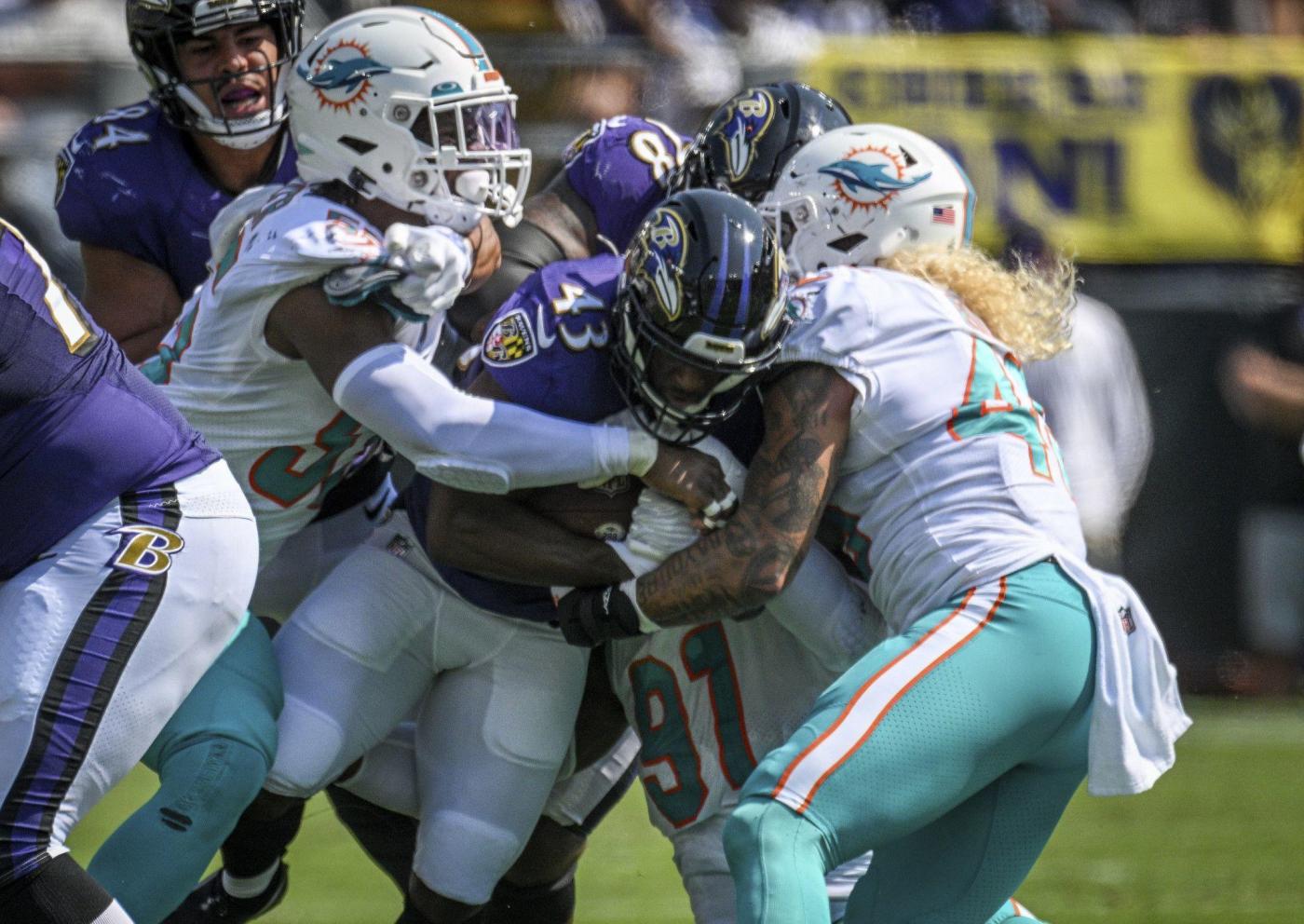 Here’s what the Baltimore Sun sports staff had to say immediately after the Ravens’ stunning 42-38 loss to the Miami Dolphins in Sunday’s home opener at M&T Bank Stadium:

Childs Walker, reporter: That nightmare of a fourth quarter won’t be easy to forget.

In 15 minutes of horrid football, the Ravens wasted one of the best performances of Lamar Jackson’s career and left us with serious questions about the health of their defense. They flirted with danger when they started the game with a kickoff return touchdown, an interception and an 18-play drive only to be tied at 7 early in the second quarter.

Jackson wiped away any notion that they would squander their fast start, playing one of the sharpest halves of his career against a defense that rattled him last November in Miami. He was aided by excellent pass protection and strong games from his top two targets, Rashod Bateman and Mark Andrews. The Ravens seemed set to run away from the Dolphins when they went up three touchdowns with 26 seconds to go in the third quarter. But their defense could not hold the lead.

The dominant front seven we saw in Week 1 against the New York Jets was nowhere in evidence. A secondary relying on injured veterans and untested rookies could not prevent Tyreek Hill and Jaylen Waddle (361 combined yards) from breaking big plays. Linebacker Patrick Queen followed up one of his best games with a poor outing. Only Marcus Williams’ sticky hands (two more interceptions) kept this from being a 60-minute defensive disaster.

Two weeks in, we have no clear image of this Ravens team. Injuries are still holding back their secondary and running game, which are supposed to be the pillars of the operation. Jackson has been a magician, but he can’t patch over every hole.

Mike Preston, columnist: The same problems that plagued the Ravens last year hurt them again Sunday. The pass rush is better than a year ago, but the Ravens can’t cover in the secondary. They got beat physically, and sometimes the Ravens’ defenders seemed to have no clue about their assignments. It was another meltdown and another disaster.

Ryan McFadden, reporter: Speechless. Lamar Jackson was beyond amazing, but his historic performance was overshadowed by a defensive meltdown that had everyone inside M&T Bank Stadium stunned. The Dolphins outscored the Ravens 35-10 in the second half, including 28-3 in the fourth quarter. Jaylen Waddle and Tyreek Hill had Ravens defensive backs looking lost in coverage while Baltimore’s pass rush was nonexistent when it mattered most.

C.J. Doon, editor: The only solace I can offer Ravens fans is that there are 15 more games left to put this one in your rearview mirror. Just about everything that could go wrong in the fourth quarter did, from blown coverages in the secondary to missed chances on offense. If there’s one lesson to take from this disaster, it’s that Lamar Jackson can’t do everything by himself.

Tim Schwartz, editor: So much for the secondary being a point of strength, at least on Sunday. The Ravens’ meltdown was hard to watch, but chasing around the league’s most dynamic wide receiver duo of Jaylen Waddle and Tyreek Hill for four long quarters will wear down any defense. It was early in the game and hard to remember, but that fumble on the snap at the Dolphins’ 1-yard line in the first quarter came back to haunt Baltimore, which will happen against good teams.

The Ravens will be OK, but this one will be hard to stomach, especially against a team they’ll likely be competing with for a playoff spot in the AFC. Even with Lamar Jackson doing what makes him one of a kind, becoming the first player in NFL history to have a passing touchdown and a rushing touchdown of at least 75 yards in the same game, it wasn’t enough. That has to hurt.