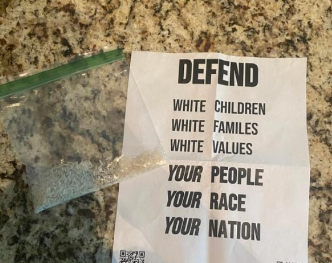 Some Lino Lakes residents woke up Saturday to find white bags of rice containing racist messages on their properties, according to the Minnesota chapter of the Council on American-Islamic Relations.

CAIR-Minnesota condemned the action in a press release sent out Sunday. Leaders said they welcomed a statement from state senator Roger Chamberlain, (R-Lino Lakes) expressing “zero tolerance for this behavior.”

“I condemn these racist acts in the strongest possible way,” the senator said in a statement Sunday. “These cowardly actions are an attempt to sow seeds of hate and division in our community. It will have the opposite effect – those seeds will not take root; it will unite us against this evil. Make no mistake, I have zero tolerance for this behavior. It should be investigated and prosecuted to the fullest extent of the law possible as a criminal act. I support law enforcement efforts to find the perpetrators and ensure they are dealt with accordingly.”

The action is on the heels of a similar incident last week in Cottage Grove when residents there found racists flyers in bags of rice. Police are still investigating.

“The group these flyers direct people to is linked to white supremacy,” Police Chief Pete Koerner wrote on Facebook. “While the information in these flyers isn’t illegal, we agree that it is disturbing. The Cottage Grove Police Department is here to protect all of our neighbors of all races, genders, religions, etc.”

“We condemn this latest racist incident targeting our communities and welcome Senator Chamberlain’s expression of ‘zero tolerance’ for hate,” Jaylani Hussein, CAIR-MN’s executive director said in a press release Sunday about the Lino Lakes incidents. “We join in the call for law enforcement authorities to investigate all such hate incidents and to bring the perpetrators to justice.”

He added that the American Muslim community and CAIR stand in solidarity with all those challenging anti-Black racism, xenophobia, Islamophobia, antisemitism, white supremacy and all other forms of bigotry.