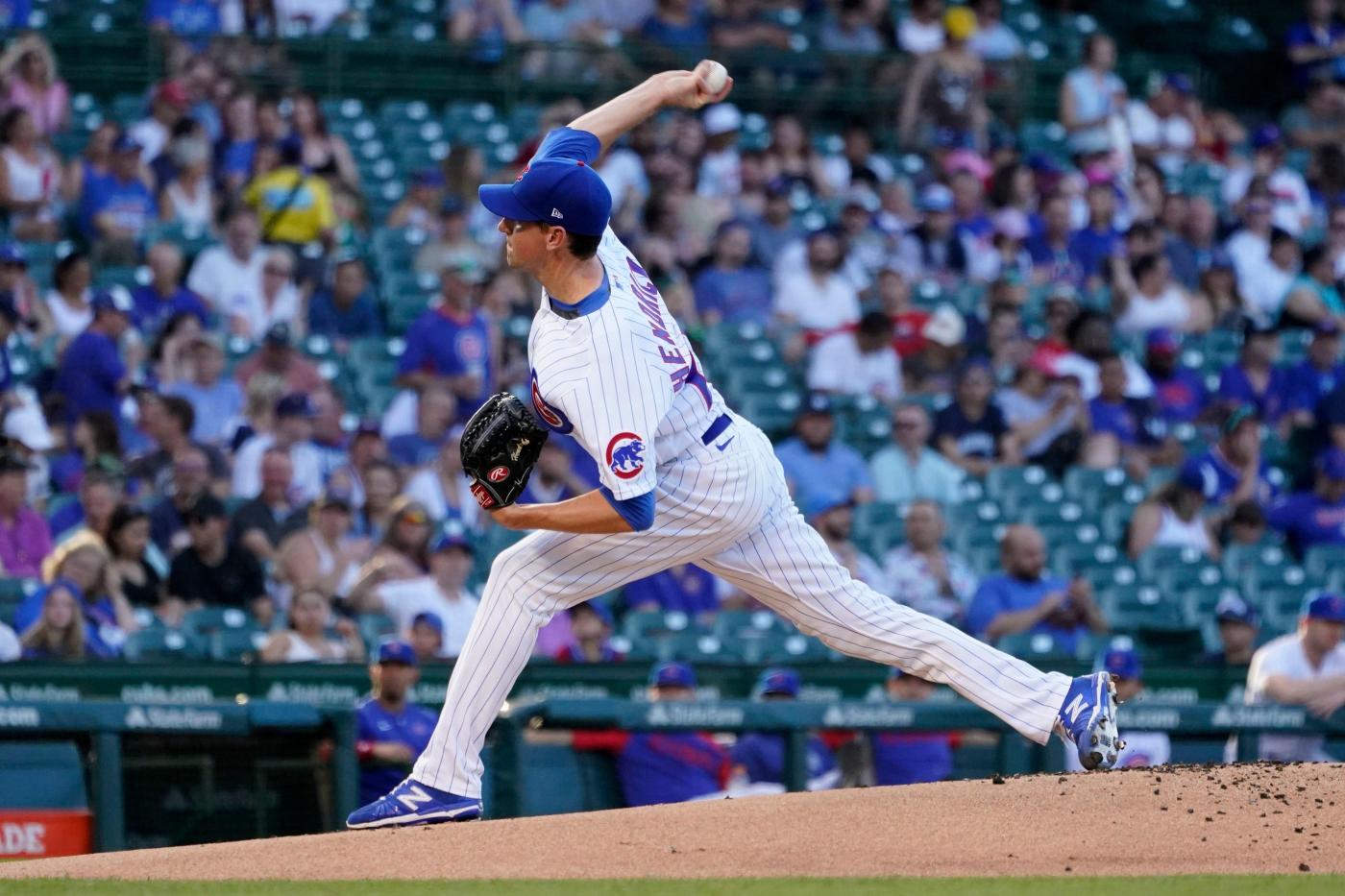 Right-hander Kyle Hendricks’ changeup has been a staple of his big-league success.

So it’s not a coincidence that the pitch was at the root of shutting down the San Diego Padres on Tuesday night after nearly two-week layoff for the pitcher.

A dead arm and shoulder fatigue had sidelined Hendricks, but time off resolved the issue. After nearing a shutout last month against San Diego, Hendricks went five-plus innings and allowed one run while not walking a batter and striking out six batters.

But the Cubs squandered Hendricks’ outing in a 12-5 loss, which was a season-high eight straight defeat. The bullpen imploded after his departure, allowing all 12 runs to score over the final four innings. Manager David Ross needed three pitchers to get through the seventh inning when the Padres loaded the bases twice with nobody out as they sent 12 batters to the plate in the six-run, go-ahead inning.

“I feel back to 100% normal,” Hendricks said. “Fatigued a little bit for sure, maybe a little bit at the end. I left that pitch up and that was maybe the one bad pitch for me. But overall I felt healthwise great and stamina-wise real good there for a while. My stuff and my mechanics felt really good so I’ve got to get back into a routine now and get that pitch count back up.”

Right-hander Caleb Kilian will start Wednesday against the Padres, Ross announced after the loss. The Cubs will need to put someone on the injured list to recall the rookie since Kilian hasn’t spent the minimum 15 days in the minors since the team optioned him.

Hendricks surrendered a leadoff double in the sixth, prompting a mound visit from Ross. Prior to the inning, they had discussed in the dugout that Hendricks would be going batter-to-batter in the inning. Coming into the game, Hendricks and the Cubs felt comfortable letting him throw in the 85-pitch range. But, at 78 pitches and with a five-run lead, Ross went to the bullpen following the double.

“I was watching and it looked like he was running out of gas,” Ross said.

The bullpen’s meltdown thwarted Hendricks’ momentum-building start. Of the five relievers used — Chris Martin, Scott Effross, Mychal Givens, Brandon Hughes and Eric Stout — only Hughes did not allow a run. Givens failed to record an out in the seventh, walking three Padres and was charged with four runs allowed.

“It’s hard to hard to put my finger on it and sometimes they have a bad night,” Ross said of the bullpen. “They’d been really good. I’m not going to sit up here and make some excuse or something. They weren’t good. They’ll be back in there tomorrow night.”

Getting Hendricks right is important after his ups and downs dating to the start of last season.

“Kyle was fantastic, I couldn’t ask for more,” Contreras said. “He battled. He execute every pitch that was called.”

His changeup appears to be the key to unlocking better consistency, and the Cubs need that to carry over. He threw 40% changeups Tuesday, his highest Pitch% in 12 starts this year. He hadn’t thrown a higher percentage in a start since Sept. 16. Hendricks tallied nine whiffs on the Padres’ 17 swings against his changeup.

“There’s some things that we tried to identify in his downtime of getting back to what he is,” Ross said. “I want him to continue to do that and let the other teams figure out what the difference is, but I thought he got back to a lot of the ways that he’s had success this year.”

Hendricks is known for how frequently he throws in between starts and values getting work in off a mound. But “for a guy that wants to throw a lot, it’s kind of hard at times,” to take the proper rest needed, Hottovy said. Based on the off days last week, the Cubs had targeted Hendricks to return Tuesday while also considering Sunday’s series finale at Yankee Stadium.

The Cubs opted to not put Hendricks on the injured list because of rotation flexibility with scheduled off days and optimism he wouldn’t need to be sidelined too long. If they had needed his active roster spot, maybe the Cubs would have taken a different path to getting Hendricks the rest he needed for his arm and shoulder to bounce back.

“Once we hit that point where he felt like he was recovering well and it wasn’t taking as much to get loose, then we were ready to push it with some bullpens and stuff,” Hottovy said. “And once he got to the bullpens, we can get pitch data or you can get more information to kind of get a clearer picture of where he is.

“We were holding out hope that there was a chance he’d be back a little bit sooner but, in the end, I think we made the right decisions with getting him ready.”

Getting Hendricks back is a boost after the loss of three veteran starters to the IL. Wade Miley’s left shoulder was examined Monday and he’s been prescribed rest. He will then be reevaluated and given a throwing program. The Cubs felt confident he had fully healed from the shoulder strain when he came off the IL Friday and he felt good until one pitch to Josh Donaldson.

Hottovy said the Cubs should have a better timetable for Miley’s return next week. He anticipates Miley will need a deliberate ramp up to hit all the checkpoints. Hottovy called it a “blurred line” as to whether Miley reaggravated his previous shoulder injury or suffered a new injury elsewhere in his shoulder.

“It’s in a similar area, but he feels it at different points,” Hottovy said. “One he felt it in his extension and then one might be when he’s going into layback external rotation. So, we’ve got to let that area calm down and figure out what we’re actually dealing with.”