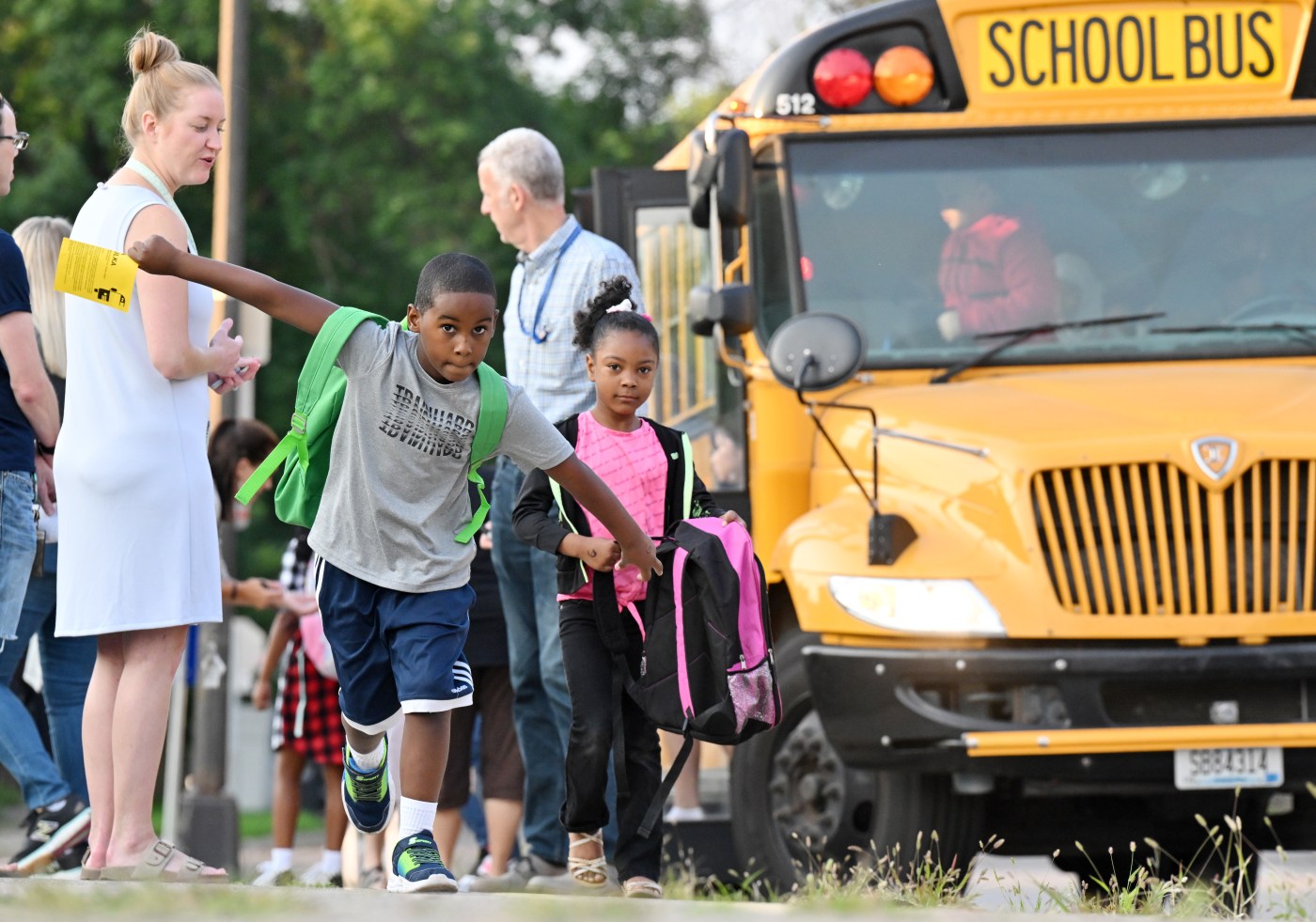 Just before the first classes of the school year started at 7:30 a.m. Tuesday, a boy stepped groggily out of a pickup truck in the parent drop-off lane at Bruce Vento Elementary.

“Usually, they belt out of the door,” Principal Nicky Napierala said, taking note of the two-hour difference from last year’s 9:30 start time.

Between closures and merges, reopenings and new schedules, about half of the buildings in St. Paul Public Schools are undergoing significant changes this fall.

At Bruce Vento, roughly one-third of the students and staff have come over from nearby John A. Johnson Elementary, one of five schools that closed due to low enrollment. It’s also one of a dozen schools that saw its start time change by an hour or two in order to preserve early- and late-start school options in each area of the city.

The early start has its pros and cons, but Napierala called the John A. Johnson merger a “perfect fit.”

“I”m super excited that we get to welcome John A. Johnson students and make them feel part of a new community,” she said. “We pretty much gained their whole staff, which is great.”

The consolidation was intended to help stabilize enrollment after a decade-long decline by creating “well-rounded” schools with teachers who specialize in non-core classes. Now with around 600 students, Napierala said she was able to add specialists in science, social studies and media technology.

More change will come to Bruce Vento next year, when the district starts construction on a new school building on the eastern half of the property in the Payne-Phalen neighborhood.

For Farhan Aden, that will mean saying goodbye to the building that has taught the eldest two of his four children.

“It’s been an awesome experience. The school is really nice,” he said after dropping off his fifth-grade son.

Classes in the St. Paul district have been held in-person since spring 2021, but the coronavirus pandemic hasn’t left the minds of parents. As several students walked into Bruce Vento wearing face masks Tuesday morning, Aden said it feels like an “almost” normal school year.

The district continues to deal with a staffing shortage made worse by the pandemic and a strong statewide employment picture.

A virtual hiring fair is planned for paraprofessionals and special-education teachers on Friday. And the district, as of two weeks ago, expected to have only around 215 bus drivers — up from 175 last year but down from a pre-pandemic 300, meaning it will rely heavily on Metro Transit to get students to and from high schools.

Fifty out of 230 buses were at least 10 minutes late picking up students Tuesday morning, according to district spokeswoman Erica Wacker, who described that as “far better than last year.”

“Our contractors are reporting poor traffic due to construction as a major issue on the first day,” she said.

John A. Johnson is the new home of LEAP High School, whose immigrant and refugee student population has moved out of the Wilson building.

Parkway still is a middle school, but it’s now for Hmong studies, not Montessori.

Highwood Hills Elementary, which nearly closed, is trying to reinvent itself with a focus on technology, engineering and agriculture.

And there’s a new Career and Pathway Center on the St. Paul College campus for high school juniors and seniors to try out career-focused classes in the afternoons.

Meanwhile, 12 schools have new start times, and all 10 high schools – up from three last year – are using block schedules, where students take four, 79-minutes classes one day and a different four classes the next.

What, too soon? Source link