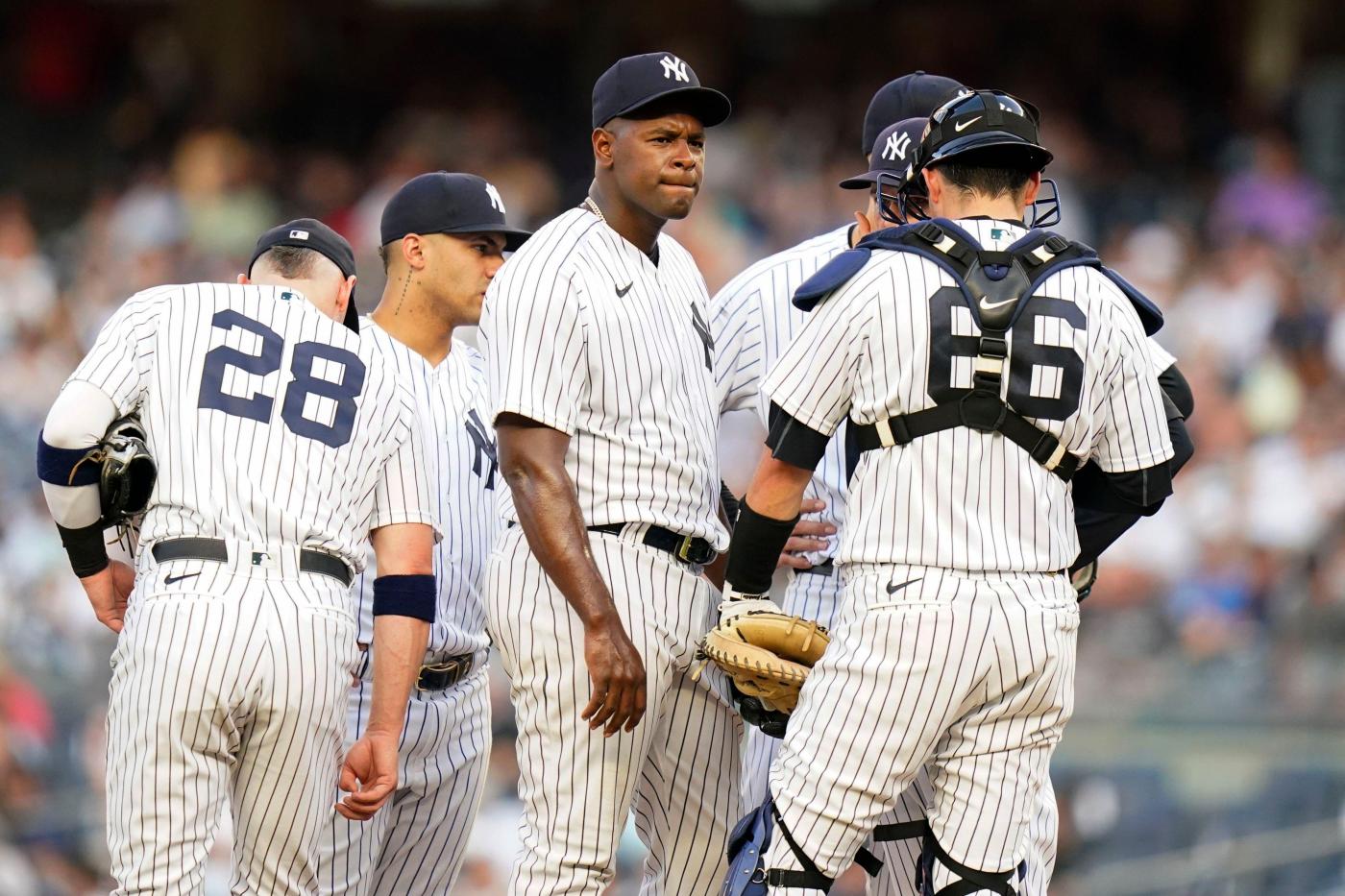 Luis Severino walking off the field Wednesday night after just two innings was a red flag. The Yankees right-hander had pitched so well through the first half of the season that it was easy to forget he had lost most of the last three seasons to injuries. It was easy to push aside the idea that the Yankees rotation was going to have to go through some changes in the second half.

But Wednesday night, that came back to the forefront.

Severino left Wednesday night’s game with “tightness” in his right shoulder. He was examined by a team doctor during the game and was to undergo an MRI on Thursday. The 28-year-old, who has been through a torn lat muscle, Tommy John surgery, a groin strain and some shoulder tightness over the last three years, was optimistic that this is something that “hopefully won’t take too long.”

Still, the Yankees are at the point of the season where they will have to make some decisions. They have a rotation that is starting to show some wear and tear with a combined 6.72 ERA through the last turn and the trade deadline just over two weeks from now. They went into the season knowing they would need pitching depth to get through the year and felt fairly confident that their younger pitchers could step in and fill big roles.

Now, they need to decide if they are willing to gamble their season on the pitching depth they have, or bring in reinforcements.

They’ll get an up-close look at the top of the market in Reds right-hander Luis Castillo on Thursday, who will likely be the prize of the trade market when the deadline closes on Aug. 2, when he starts the series finale against them at the Stadium. He will likely be at the center of some heated bidding as the deadline pulls closer and not high on the Yankees’ priority list.

But they need to think about bolstering their pitching depth.

The Yankees felt they were deep in pitching at the start of the season when they had Luis Gil, who had been brilliant in his debut last season, Deivi Garcia, Clarke Schmidt and JP Sears in spring training. Since then, their depth has been thinned out. Gil was lost to Tommy John surgery in May. Sears has been in the Yankees bullpen, giving them 3.1 innings Wednesday night before being optioned back to Triple-A to give the Yankees a fresh arm in the bullpen. Garcia has not been able to figure it out in Triple-A and has dropped off the radar. Schmidt has been up in the big leagues a bit this season, but most recently he’s been starting in Triple-A and seems ready to step in if the Yankees need another starter. They also have been very impressed with Ken Waldichuk, the lefty in Triple-A who will play in Sunday’s Future Game. Though not on the 40-man roster, there were some in the organization who predicted he would play a part in this big league season as far back as February.

The Yankees also have Domingo German close to returning. The right-hander is scheduled to make another minor league rehab start  Friday with Triple-A Scranton, but Yankees manager Aaron Boone made it clear that was tentative.

The Bombers can gamble on that they have or go out and find some pitching.

The Yankees don’t need to bring in an ace. They have one in Gerrit Cole. They had a backup ace in Severino through the first half of the season, who finished the first half 5-3 with a 3.45 ERA and a 1.070 WHIP in 16 starts.

But that was always a bit of an illusion. The Yankees knew going into this season they could not lean on Severino like a regular starter. He has thrown 86 innings already this season after having thrown just over 27 in the last three combined and they were already starting to pull back his workload. They also have to be careful with Nestor Cortes (88.2 innings), who was scheduled to start Thursday night’s series finale against the Reds. Cortes has never pitched more than 93 innings in a big league season.