Martha Stewart Reacts to Pete Davidson Meme: "He Is a Charming Boy" 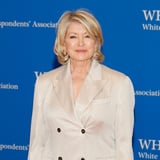 Yes, Martha Stewart has seen that viral Pete Davidson meme, but if she slides into the former “Saturday Night Live” star’s DMs it will be to invite him to be on her podcast, not to strike up a romance. After news broke of Davidson and Kim Kardashian’s split, a photo from April’s White House Correspondents’ Dinner featuring Stewart holding Davidson’s hand began to circulate alongside jokes that the two would soon be dating. “We should’ve seen this coming,” one fan tweeted. The 81-year-old business mogul is taking the meme in stride and using it as a chance to tell the world just how much she . . .