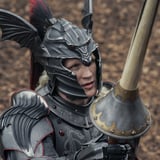 One of the most violent moments in “House of the Dragon”‘s first episode comes when Prince Daemon Targaryen (Matt Smith) and Ser Criston Cole (Fabien Frankel) face off in a joust. Cole comes out on top in the battle, but the show sets up the pair as rivals for the foreseeable future. Smith and Frankel speak to POPSUGAR about the dynamic and where it might be going. “I think there’s a sort of strange similarity between them in many ways. They’re both slightly ostracized or self-ostracized by the community that they’re in,” Smith says. Daemon is the king’s brother, but he constantly sets himself . . .