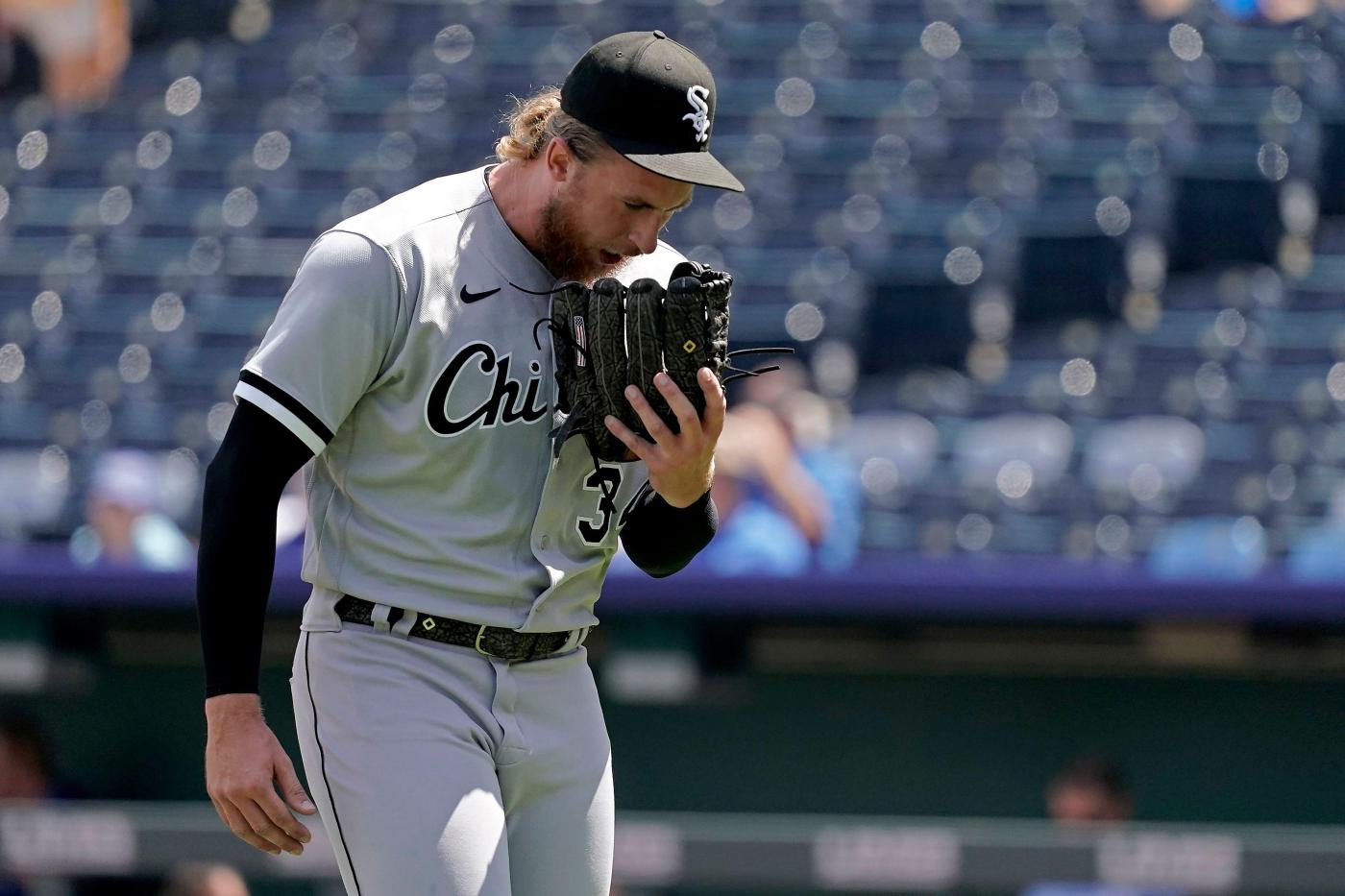 Michael Kopech received a visit from the Chicago White Sox training staff while he was warming up before the bottom of the first inning Monday against the Kansas City Royals.

Kopech faced four batters — allowing a walk, hitting a batter, giving up an RBI single and another walk — before exiting with left knee soreness.

The Sox placed the right-hander on the the 15-day injured list with a left knee strain before Tuesday’s game against the Baltimore Orioles at Camden Yards.

Kopech was relieved when he heard the results of the evaluation.

“Because if it was something that was severe, I could potentially be missing the rest of the season,” he said. “I’m very fortunate that’s not the case and I have a chance to come back and continue pitching and helping the team win. It’s not ideal to go on the IL, but to know I could come back and maybe make a stronger push at the end, that’s a good thing for me.”

Of his pregame issues Monday, Kopech said: “It’s one of those days where you can go out there and do the same thing preparing for a start every time and something’s not going to feel right. Unfortunately it was a little more serious than something not just feeling right. But I was hydrated, I was warmed up, just had something tweak.”

After spending most of last season in the bullpen, Kopech has performed well in his return to the rotation this year, going 4-9 with a 3.58 ERA and 98 strikeouts in 23 starts.

He has allowed one hit or fewer over five-plus innings five times in 2022, including six hitless innings against the Detroit Tigers on Aug. 12 at Guaranteed Rate Field.

“It’s what I’ve wanted for a long time now, to be a starting pitcher in the major leagues,” said Kopech, who missed all of 2019 recovering from Tommy John surgery and opted out of the pandemic-shortened 2020 season for personal reasons. “For the most part, with a little bit of extra rest here and there, I haven’t missed a start this year.

“I was taking a lot of pride in that, so it’s unfortunate that I have to be on the IL right now, but considering that my workload the past few years has been significantly lower, I think what I’ve done, I’m happy with. I’m glad I’ve had the opportunity and I’m glad I’ve given the team a chance to win when I can.”

Kopech exited a June 12 outing against the Texas Rangers after two-thirds of an inning with right knee discomfort and returned to start June 19 in Houston.

“There are points in the year where guys kind of have to work through some things, and that’s something I kind of had to work through, wasn’t anything major,” he said. “A discomfort thing I was managing more than anything.”

“I’m at a point where I’ve thrown a lot more than I threw last year,” Kopech said. “I don’t know if rest was inevitable, but it was definitely being considered, so it’s probably a good thing for me at this point. Come back and be somewhat fresh and help with this final push.”

The Sox recalled left-hander Tanner Banks from Triple-A Charlotte in Tuesday’s corresponding move. Banks has a 3.16 ERA, one hold and 36 strikeouts in 29 relief appearances with the Sox this season.

Sox manager Tony La Russa said Davis Martin is in line to fill Kopech’s spot in the rotation. Martin, who most recently pitched Sunday for Charlotte, is 2-3 with a 4.25 ERA in eight outings (four starts) with the Sox. He has been called on for the occasional spot start.

“He’s done it before, so we’re fortunate to have him,” La Russa said. “With the off day Monday, (the Sox are) figuring where you’d actually insert him.”

The Sox have had to do plenty of shuffling, mostly with the starting lineup, as they’ve dealt with injuries throughout the season. Now they’ll have to navigate a couple of weeks without Kopech in the rotation.

“It’s important for me to get back for myself,” Kopech said, “but it’s important for the team to have all moving parts working together, especially when we are trying to make a push toward the end.”

The Sox will go to Cleveland on Sept. 15 to make up Sunday’s postponed game, the Guardians announced Tuesday. The game will start at 12:10 p.m. at Progressive Field.

Sunday’s game was postponed because of unplayable field conditions after it rained for portions of the morning in the Cleveland area.