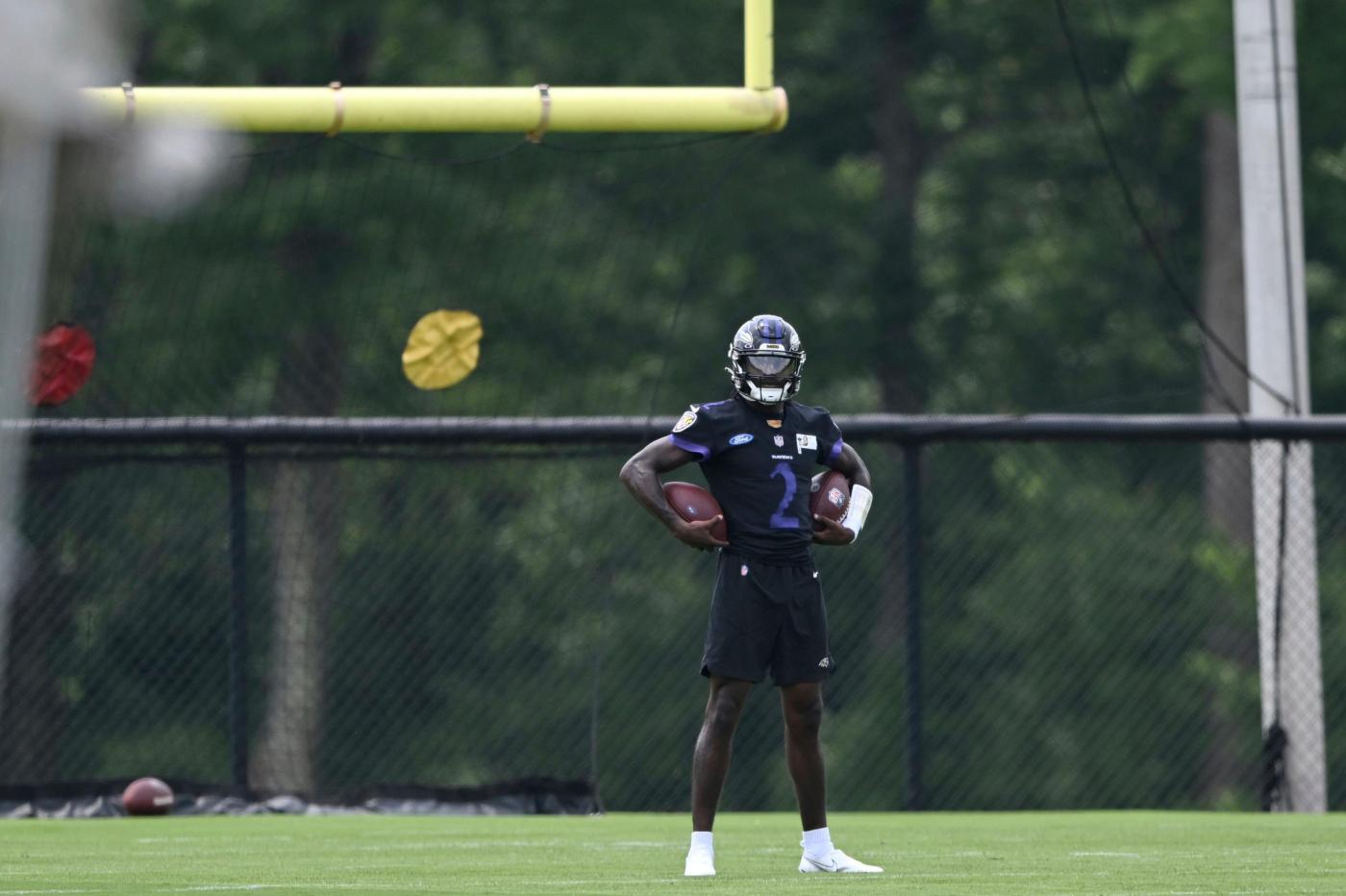 After watching Ravens backup quarterback Tyler Huntley run with the starting offense for three straight weeks in the absence of star Lamar Jackson, it doesn’t appear he has narrowed the talent gap.

In other words, Huntley, a 2020 undrafted free agent entering his third season, is still a stop-gap measure.

There were some Ravens fans who thought Huntley, a former Utah star, was nearly as good as Jackson last season when he started four of seven games while completing 64.9% of his passes for 1,081 yards, three touchdowns and four interceptions.

There were some who even demanded the Ravens trade Jackson, who missed the final four games with an ankle injury and is involved in contract negotiations for a potential long-term deal.

Jackson hasn’t practiced in the team’s voluntary offseason training activities, but coach John Harbaugh expects the 2019 NFL Most Valuable Player to participate in the mandatory minicamp next week.

So it was a good time to make an assessment of Huntley, who got to run nine straight practices, including three open to the media, while Jackson was a no-show.

The competition is still not even close.

There are some things Huntley is doing better than a year ago. His body language shows he is more in command of the offense, and there are times when he is poised in putting players in position at the line of scrimmage.

It’s safe to assume Huntley is more of a leader in the classroom than he was in 2021 because he has been in coordinator Greg Roman’s offense for two full seasons.

But he was a better passer in training camp last year than he has been the past three weeks. Last summer, he easily threw a better long ball than Jackson. He could also throw deep outs and comebacks routes, something Jackson has yet to master consistently.

But in the past two weeks, a lot of his throws have been behind or over the heads of receivers. Short timing routes, especially on the outside, have become risky, and only Huntley’s success in the running game has stood out.

The Ravens might have had to improve their offer to Jackson over the past three weeks.

“Tyler, obviously, the reps are great for him,” Harbaugh said. “It’s been really good for him to have the reps, and I think he’s doing a good job. I mean, he’s running the offense really well; the communication has been really good at the line.

Translation: Harbaugh wants Huntley to step up his game, too.

You have to be careful not to grade Huntley too harshly so early. The Ravens have several key players out with injuries, including running backs J.K. Dobbins and Gus Edwards and left tackle Ronnie Stanley.

They have a new starting center in rookie Tyler Linderbaum, and a new right tackle in veteran Morgan Moses. The receiving corps was already young, but now includes two rookie tight ends in Isaiah Likely and Charlie Kolar.

Harbaugh doesn’t seem too concerned about Huntley right now because Jackson is under contract in 2022 and expected to receive $23 million under his fifth-year team option.

If Jackson had an agent, that person probably would have advised him to participate in the recent OTAs as a show of good faith for an injured player who didn’t play up to his own standards last season.

And that’s good enough for now until Jackson gets hurt again or comes down with a third bout of the coronavirus.

If that happens, the Ravens have Huntley, who is of similar build at 6 feet 1 and 196 pounds. He might even have better overall arm strength than Jackson and can likewise make defenders miss when running the option in the open field.

He’s a good backup, the near perfect stop-gap quarterback for this offense. But that’s it.