Mike Preston: Ravens WR Rashod Bateman has all the tools. Now he needs to prove he’s a true No. 1. 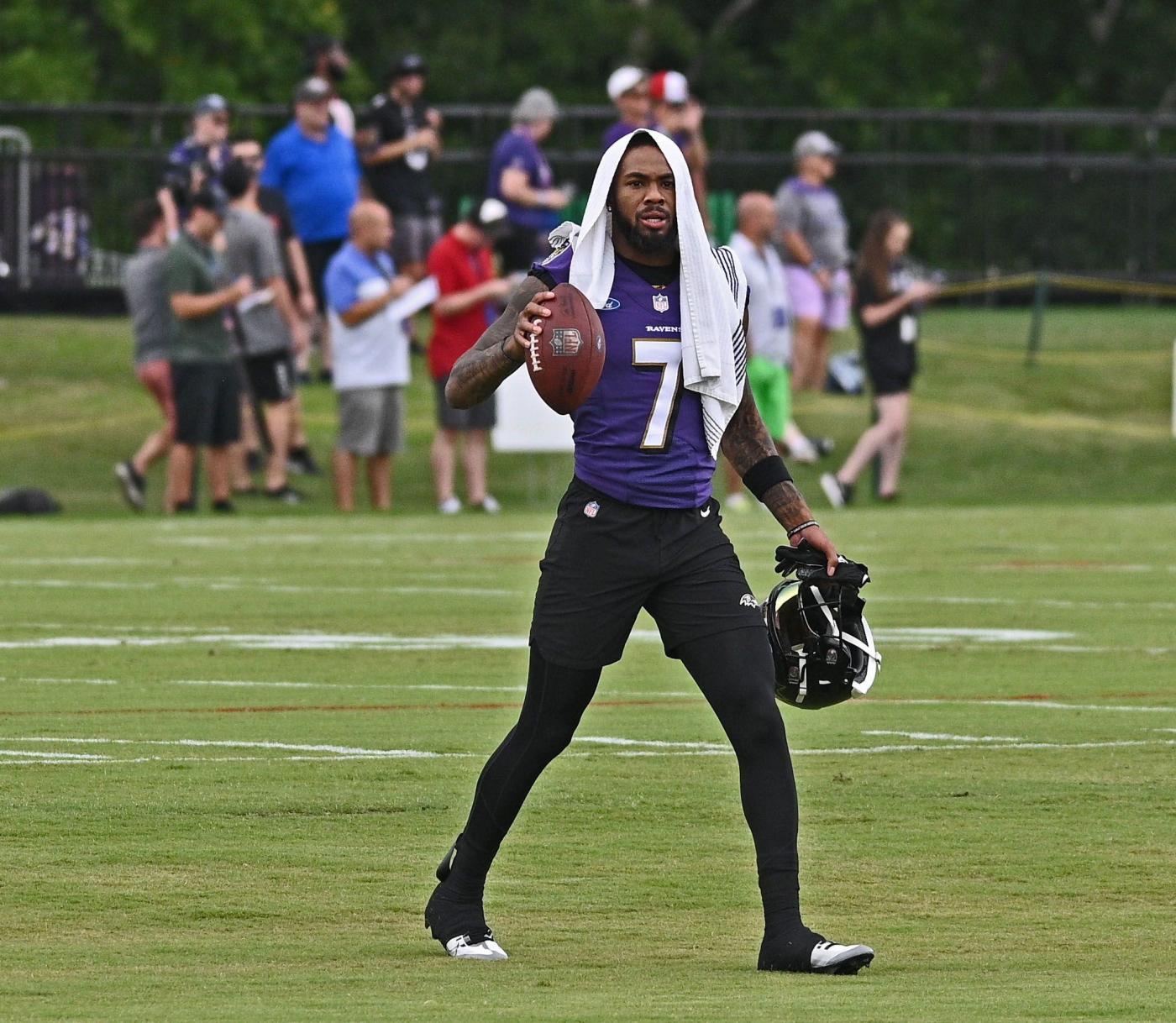 Rashod Bateman is the Ravens’ No. 1 wide receiver, but now he has to prove he’s one of the best in the NFL.

Top receivers in this league are reliable pass-catchers who can also make big plays on the outside. They make even bigger players inside the red zone and cause opposing defensive coordinators to stay up all week thinking about how to stop them.

Bateman, the team’s top draft pick out of Minnesota a year ago, had a good rookie season, but few of the league’s shutdown cornerbacks are afraid of him.

“I think Rashod can have a big jump, and the fact that he’s going to go through training camp should be a big help to him,” Ravens coach John Harbaugh said.

All great quarterbacks have great receivers. Joe Montana and Steve Young had Jerry Rice and Peyton Manning had Marvin Harrison.

Neither Ravens quarterback Lamar Jackson nor Bateman have reached that status, which is why the team needs the second-year receiver to improve. As a rookie, Bateman had 46 catches for 515 yards and a touchdown despite missing a couple of weeks of training camp and the first five games of the season with a groin injury.

Jackson has never truly had a No. 1 receiver or anyone near that class in Baltimore. The closest was Marquise Brown, who was traded to the Arizona Cardinals on the first night of April’s draft after four up-and-down seasons.

But if Bateman can fill that role, he’ll take a lot of pressure off of Jackson and tight end Mark Andrews, the top pass-catcher from a year ago with 107 catches for 1,361 yards and nine touchdowns.

“I’m really excited to get some good battles in with Bateman,” cornerback Marlon Humphrey said. “I know what he can do on the field. I know he hasn’t shown it yet, but anyone around here in the building has seen what he can do.

Bateman has all the tools, which is why the Ravens made him the No. 27 overall pick in the 2021 draft. At Minnesota, he finished his career with 147 receptions for 2,395 yards and 19 touchdowns. He is big enough (6 feet 1, 193 pounds) to run through press coverage and shield defenders away from the ball.

There were some concerns about his speed, but so far no cornerback has caught Bateman from behind once he hits full stride. He has enough quickness to get separation and might have the best hands on the team after fellow receiver James Proche II.

There are times in practice when it’s easy to understand why the Ravens valued him so much. But there are also occasions when he has dropped easy passes, and it brings back memories of other past disappointments at the position such as Travis Taylor, Mark Clayton, Breshad Perriman and, even to some degree, Brown.

But the Ravens appear committed to Bateman and other young receivers such as Proche and Devin Duvernay. In the past couple of years, the team has signed veteran receivers who were past their primes such as Dez Bryant and Sammy Watkins, and they have contributed very little.

That could still happen this year, but it appears that general manager Eric DeCosta wants to find out if these young guys can play before the Ravens hit the free-agent market again.

“It shows that the coaches trust us, trust our abilities, trust our work and they trust what we’ve done and what they’ve seen,” Bateman said. “We definitely look forward to showcasing that — to keep showcasing that — and to show our team that we can do what we need to do. I think that we’re all just excited to play right now.”

Training camp is only two days old, but Bateman likes what he sees from Jackson, who has added more muscle to his upper body.

“I would say that he’s better all-around this year,” Bateman said of the 2019 NFL Most Valuable Player, who is entering the final year of his rookie contract. “I feel like all of us are. We all took this offseason pretty seriously, like I said, because we’re hungry, and we’re ready for more. So, I’m excited to see what he does.”

Bateman also likes going against Humphrey and fellow cornerback Marcus Peters. They can only make him better.

“Marlon is a phenomenal player,” Bateman said. “He definitely makes our team better. He’s an incredible leader. So, I definitely look forward to going against him throughout training camp.”

The Ravens are saying the same thing about Bateman, who has to prove he is a true No. 1.