A week after Ukraine and Russia reached an agreement for safe transit of grain vessels, Kyiv is ramping up shipments. Three more ships left Ukrainian Black Sea ports early Friday, carrying corn bound for Ireland, the UK and Turkey. Another vessel should soon sail for Ukraine’s Chornomorsk to load grain after an inspection in Istanbul.

President Vladimir Putin and Turkish President Recep Tayyip Erdogan meet Friday afternoon in Russia’s Black Sea port city of Sochi, a rare foray outside Moscow for Russia’s leader since the start of the war in Ukraine.

On the heels of Russian Foreign Minister Sergei Lavrov’s recent trip to Africa, US Secretary of State Antony Blinken is heading in that direction. The back-to-back trips highlight the reality that much of the world isn’t joining the US and Europe in efforts to isolate Russia.

Three more Navi star, Rojen & Polarnet left ports. Our main goal is to increase the transshipment volume in our ports. We have to provide the processing of 100 per month to be able to export the necessary amount of foodstuffs. pic.twitter.com/6QQyTWlsSX

Well into the conflict’s sixth month, Ukraine is likely seizing the strategic initiative and forcing Russia to reallocate forces and re-prioritize efforts in response to Kyiv’s counteroffensive operations, the Institute for the Study of War said. Ukraine’s forces conducted a series of localized counterattacks between Izyum and Slovyansk and regained positions in a number of settlements. Russia is conducting an offensive operation in the Bakhmut and Avdiyivka area in Donetsk. Ukraine’s general staff reported. The Zaporizhzhia region was shelled overnight, according to local authorities. Explosions were also heard in southern port of Mykolaiv, Kharkiv in the north, and in the Dnipropetrovsk region.

Three more grain vessels left Ukraine’s Black Sea ports early Friday as the country tries to ramp up exports of food that have been blocked since the start of Russia’s invasion almost half a year earlier.

Navi Star, Rojen and Polarnet are carrying corn for Ireland, the UK and Turkey, respectively. Another ship, the Fulmar S, is waiting for inspection in Istanbul before it leaves for Ukraine’s Chornomorsk port to load grain, Turkish media reported.

Efforts are under way to send more vessels through a safe corridor in the Black Sea to ship grain, unlocking millions of tons of crops piling up in the country and boosting global food supplies.

Oil headed for a punishing weekly loss on increasing evidence that a global economic slowdown is spurring demand destruction, with prices collapsing to the lowest level in six months as key time spreads contract. 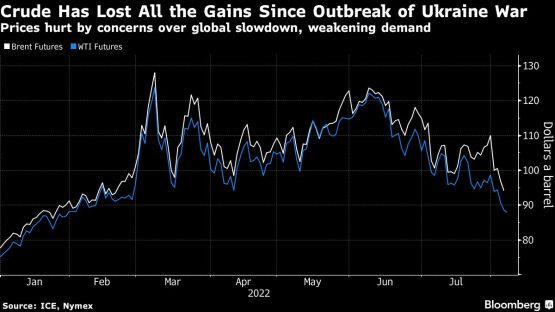 The sell-off, which has wiped out gains triggered by Russia’s invasion of Ukraine, will ease the inflationary pressures coursing through the global economy that have spurred central banks including the Federal Reserve to hike rates.

Comprising nations that account for some 85% of global economic output, the G-20 is supposed to be more reflective of the world. Yet only half its number has joined the international sanctions imposed on fellow member Russia over its invasion of Ukraine.

It’s an uncomfortable reality confronting Secretary of State Antony Blinken during his extended tour of Southeast Asia and Africa: Much of the world isn’t ready to follow US and European efforts to isolate President Vladimir Putin’s Russia. 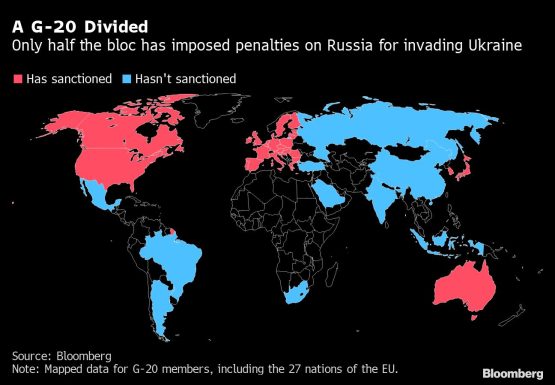 A Moscow court convicted WNBA player Brittney Griner on drug charges and sentenced her to nine years in prison, raising the stakes in deadlocked talks between Russia and the US on a possible prisoner exchange involving the basketball star.

“The court found the defendant guilty,” Judge Anna Sotnikov said, according to the Interfax news service. Prosecutors sought a 9 1/2-year term, close to the maximum.

Russia’s invasion of Ukraine and lingering impacts of the pandemic will widen global current-account balances for a third year in 2022, according to the International Monetary Fund.

Current accounts — the broadest measure of a country’s trade in good and services, expressed as either a deficit or surplus — had been narrowing for several years until Covid-19 upended patterns of demand and trade. The widening continued last year as economic recovery raised commodity prices, a trend that is being exacerbated this year by the war’s impact on energy and food costs.