NBA and college basketball better off with NIL – Twin Cities 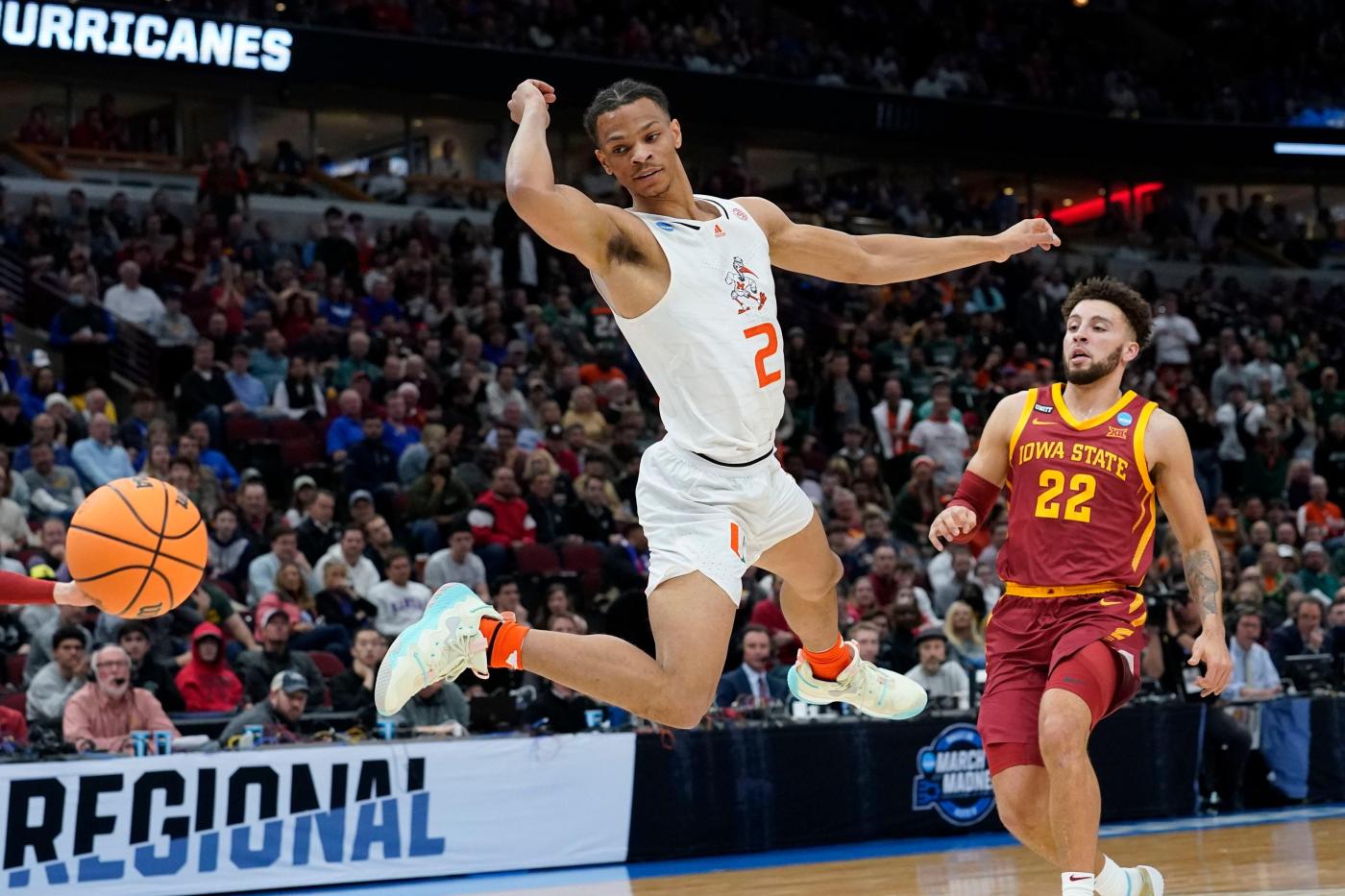 R.J. Hampton, the third-year Orlando Magic guard, was in the same position during the spring of 2019 many ubertalented boys basketball players find themselves in the latter stages of high school.

He had his sights on the NBA but had a decision to make about the one year between graduating and being eligible for the NBA draft.

Even though it was just three years ago, the landscape of college basketball — and the options for basketball players leaving high school — was significantly different.

The G League Ignite, a developmental team affiliated with the NBA’s G League, was a year away from starting play and wasn’t an option. Overtime Elite, an Atlanta-based basketball league focused on youth development, was two years away from its inaugural season.

The NCAA just started to publicly consider how its rules could be modified to allow athletes to financially benefit from their name, image and likeness and the organization’s NIL policy didn’t become official for another two years.

“If we’re being real,” Hampton told the Orlando Sentinel, “without me, there ain’t no NIL.”

He wasn’t the first American to forgo college and play overseas immediately after high school —see Brandon Jennings spurning the University of Arizona for Italy in 2008 — but his decision wasn’t driven by concerns over his academic or amateur status.

Hampton had the SAT scores. He hadn’t violated NCAA eligibility rules. His goal was the NBA.

As a 5-star out of Little Elm High School (Little Elm, Texas) who ESPN had ranked as the No. 4 prospect in the 2020 recruiting class, Hampton was recruited by nearly every major program, including Kansas, Memphis, Duke, Kentucky, Florida and Texas Tech.

The process accelerated when he graduated high school early and reclassified to 2019. Hampton narrowed his choices to Kansas and Memphis.

He grew up a Kansas fan and his best friend, current Jayhawks forward Jalen Wilson, committed there in June. Hampton liked Memphis’ coaching staff under former Magic star Penny Hardaway, and that included Mike Miller as an assistant. Miller, a former Magic and University of Florida forward, is now Hampton’s agent.

But when it came time to make a decision a month earlier, Hampton chose neither, going pro by signing with the Australian National Basketball League’s New Zealand Breakers. Hampton said he hadn’t thought about playing overseas until his father, Roderick, mentioned it. Roderick played at SMU from 1987-91 before playing professionally for a few years.

He went overseas because he believed it would best prepare him for the NBA. Hampton also could be compensated financially — not only through his salary but also endorsement deals which wasn’t possible for college athletes until the Supreme Court ruled against the NCAA in the NCAA v. Alston case.

That permitted athletes to make money off their NIL starting July 1, 2021.

One year later — three after Hampton’s decision — NIL’s impact is palpable not only throughout college basketball but with how players approach the NBA draft.

Players with uncertain draft ranges were more willing to return to college.

There were 247 college players who applied as early entrants to the 2022 draft, and 135 of those chose to remain. Of the 112 players who removed their names from consideration, 47 were juniors and 51 were seniors granted an extra year of eligibility because of the COVID-19 pandemic.

Tshiebwe will become the first Wooden Award winner to return to college since UNC’s Tyler Hansbrough in 2008.

How NIL impacted some of their decisions is clear. As a Western Conference executive told the Sentinel, it’s “probably” a factor for most.

“There are a lot of good college basketball players returning this year who may not have done so in the past,” the executive said. “They may have just taken the swing and tried to be a second-round pick or work their way into the first round via workouts. It’s encouraging to see that happen. Those guys will get another year of making college basketball better, too.”

Money in the bank

“It’s helping out a lot of pro scouts right now,” said Houston Rockets assistant coach Mike Batiste, who played at Arizona State in the late 1990s and in the NBA as well as professionally overseas before starting his coaching career in 2014. “It’s only going to get better from here.”

Teams have more time to make evaluations the longer players stay in school. As an Eastern Conference executive told the Sentinel, teams can better understand what NBA-ready skills a player would consistently bring when they have more time to scout.

They also can get a better handle on how those players handle success and mature off the court. Determining the ceiling for 18- and 19-year-olds in any profession is an inexact science.

“More exposure is better,” Washington Wizards president and general manager Tommy Sheppard said. “For the team side, the more they see a player, the more comfortable they feel the evaluation will be.”

Many players from this past draft benefited from returning to college for an extra year.

Tshiebwe, this past season’s consensus men’s basketball national player of the year, is hoping to do the same as a senior.

NIL will help. Tshiebwe is expected to earn “in the neighborhood” of $2 million in 2022-23 through NIL, according to Stadium.

“They get another year to mature, expand their game and become better,” the Western Conference executive said. “Everyone’s a winner in that scenario because they actually made some money.”

The 30 first-round picks from June’s draft will earn $2.19 million on the low end and up to $11.06 million because of scale contracts.

With few exceptions, second-rounders will make significantly less than $2 million. Caleb Houstan, who the Magic drafted No. 32 overall, has a $2 million salary for his rookie season and is guaranteed $4 million as part of the 4-year, $8.21 million contract.

The first two years of rookie contracts for first-round picks are automatically guaranteed. Years 3 and 4 are team options. Second-round picks don’t have automatic guarantees, giving teams most of the negotiating leverage. Some second-rounders sign two-way contracts, which will come with a $508,891 salary for 2022-23. Players who go undrafted and sign standard G League contracts have a significantly lower salary.

The most prominent men’s college basketball players, such as Tshiebwe, can earn just as much as a second-rounder through NIL compensation.

Lesser-known players, such as Nijel Pack, can make more money in college than they would in the G League. Pack, a former Kansas State guard who was ranked as the No. 1 player in the transfer portal before committing to Miami in April, struck an NIL deal with LifeWallet that includes $800,000 over two years plus a car. Isaiah Wong, who is represented by the same agent as Pack and has a LifeWallet deal, too, withdrew from the draft to return to Miami for his senior season.

“It’s easier to go after your goal, like getting to the NBA, if you got money banked away,” Sheppard said. “That gives you a little bit more confidence, a lot of security to go pursue those things. If it doesn’t work out, they already got that money in the bank.”

Hampton sees the potential downsides of returning to college.

“You never know what [could] happen,” he said. “There are people who go to college as projected picks, get hurt, never get picked or have a bad college experience.”

His perspective is understood by NBA personnel.

“The agents and players will look at it as, ‘They’ll have more time to pick me apart and look at my weaknesses,’” the Western Conference executive said. “I tend to look at it more as a way to [get] a broader evaluation to put them in positions to succeed. The intention is how are we helping the player. I can understand how other people look at it.”

Going overseas didn’t pan out the way Hampton had hoped. He was drafted at No. 24 in 2020 after previously being projected as a top-10 pick.

“If there was NIL back then,” he said, “that would’ve definitely impacted my decision.”

Ultimately, however, he’s right where he wants to be. He’s a first-round pick and receives guaranteed payouts.

That was the point of it all.

“If you have a chance to go to the league, you should go and make the most of it,” he said. “If you think you can go back to college, make noise and then next year be a first-round pick, why not go to the NBA and work your way up? My end goal was the NBA. I don’t think I would’ve gone back to college because of NIL. The league is always the first option.”

UCF coach Johnny Dawkins has spent more than three decades in basketball, first as an All-American at Duke and then as a player for nine years in the NBA. He was part of the infamous 1986 draft class, a 10th overall pick who had his career short-circuited by injury.

He understands the challenges his players face and how something like NIL could change their futures.

“They have more to weigh now based on the fact that NIL made college an option where guys have found a way to generate income on their name, image and likeness,” he said. “You can generate that while you’re in college and continuing to get your degree.

Dawkins believes that continuing their education is just as important as the dollars and cents. NIL can take away the pressure of having to choose between one or the other.

“I’ve never seen a student-athlete lose by continuing to get an education,” he said. “I’m happy to see that they have an avenue now where it’s attractive and it can become more fashionable to stay to continue to get an education along with being able to take advantage of the name image and likeness.”

Florida State coach Leonard Hamilton has seen the impact of NIL, but like most college coaches and administrators he’d like to see more guidance from either the NCAA, state or federal governments. There are too many gray areas.

“NIL has the potential to be an extremely positive addition to college sports,” he said. “The unfortunate thing is that most of us are still trying to figure out what the guidelines are and how we can best utilize this unique, special opportunity for the betterment of our student-athletes.

“The knowledge and expertise we’re given are a little bit confusing when it appears some schools have to abide by the rules and then that doesn’t appear to be the appropriate approach. I wish we had a little more guidance.”

“It will ultimately be the best overall business decision for them and their families,” he added.

Players who are likely to be drafted in the first round such as Hampton — especially lottery picks (top 14) — remain less likely to return. The rest have options.

“Most of the guys that I know that are coming back were not going to get drafted in the first round anyway,” Hamilton said. “They made good decisions. I can’t speak to whether or not NIL had an effect on [their decisions]. I don’t know anybody who didn’t keep their name in the draft that should have kept their name in the draft.”

For those players, NIL can be a safety net, providing stability until they figure out their next move.

The guidelines inevitably will be tweaked after so much outcry from college coaches and administrators because NIL rules aren’t uniform from state to state. Some want to see more policing by the NCAA for schools that use NIL as a recruitment tool. Some want to see a cap on compensation. Some want collectives, run by boosters and fan clubs, to be placed under the jurisdiction of schools.

“It could be fleeting,” Sheppard said of the positive impact it has had on basketball. “It may not exist in a few years but, right now, it levels the playing field.”

Matt Murschel contributed to this report