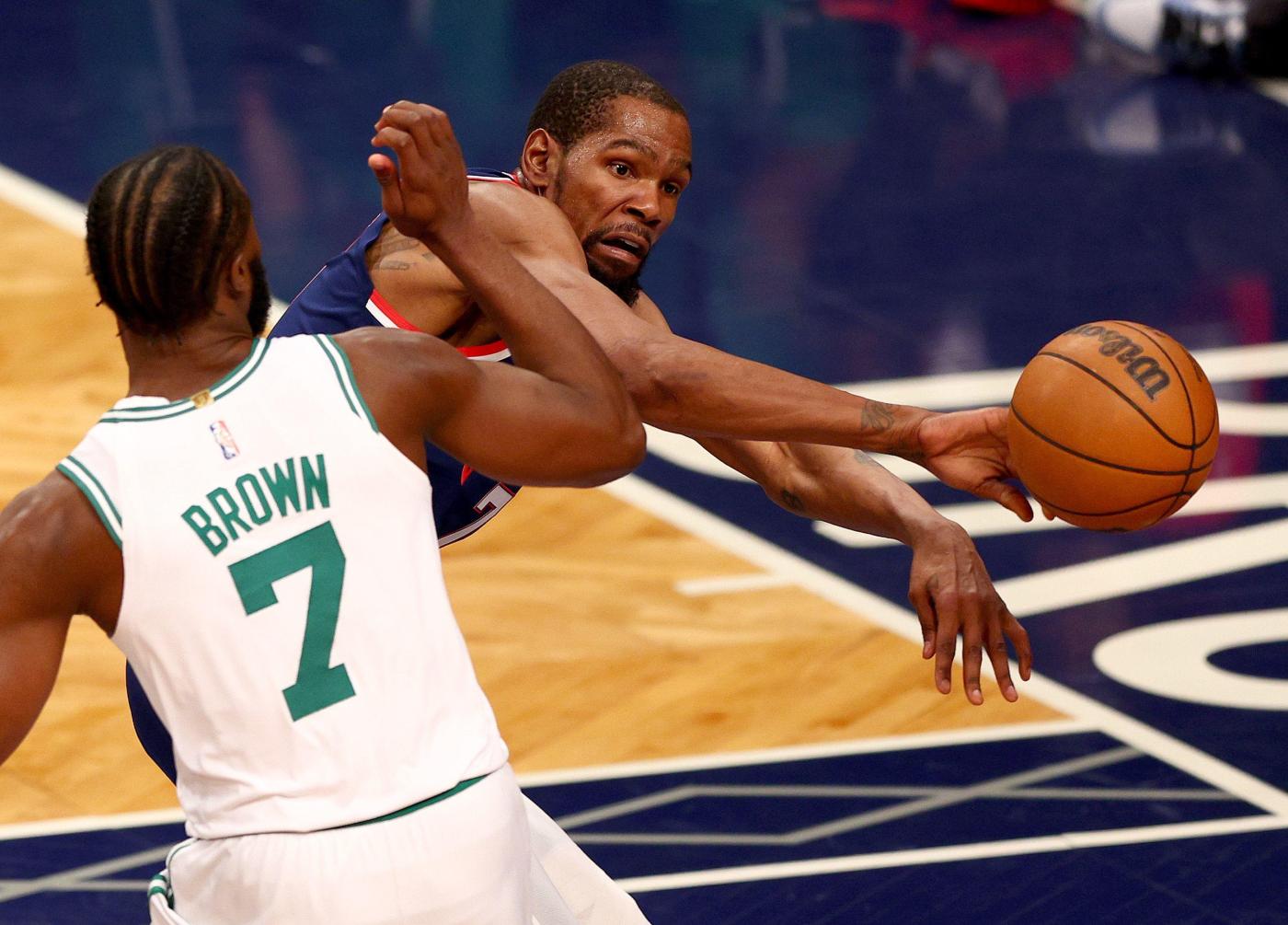 The Nets have received their best and most realistic trade offer in the Kevin Durant sweepstakes: A prospective deal centered around Boston Celtics’ All-Star guard Jaylen Brown.

The Celtics have made an offer for Durant, who requested a trade on June 30, that includes Brown, a one-time All-Star heralded as one of the NBA’s premier two-way wings; sixth man Derrick White; and a draft pick, according to The Athletic. The Nets rejected the Celtics’ offer and asked Boston to include reigning Defensive Player of the Year Marcus Smart, an additional rotation player and draft compensation.

As it stands, Brown is the best individual player the Nets have been offered in a deal for Durant. Other known offers have included Mikal Bridges from the Phoenix Suns and OG Anunoby from the Toronto Raptors.

The Nets have been seeking the best possible deal in the wake of Durant’s trade request, and for good reason: He is a franchise-altering talent, a two-time NBA Finals MVP known as one of the best scorers in NBA history. But after two recent blockbuster trades — namely the Hawks’ acquisition of Dejounte Murray that brought Danilo Gallinari, three draft picks and a pick swap to the San Antonio Spurs; and the Rudy Gobert megadeal between the Utah Jazz and Minnesota Timberwolves that sent four rotation players, a 2022 first-round draft pick, four future first-round picks and a pick swap — no teams have been willing to meet the Nets’ asking price.

The Nets are asking for multiple All-Star caliber players, or an All-Star player, rotation players and draft compensation. Forfeiting such assets would essentially gut a team trading for Durant and potentially remove them from championship contention after any deal is consummated.

Which is why the Celtics are conveniently positioned as a team capable of both pulling a deal off and having the firepower to contend for a trade in the aftermath of a deal. After sweeping the Nets out of the first round and losing to the Golden State Warriors in the NBA Finals, the Celtics improved their roster by trading for Malcolm Brogdon and signing Gallinari as a free agent. Boston also owns all of its draft picks after 2023, which is only Top-12 protected and will likely convey to the Pacers next summer.

It would behoove the Celtics, however, to find ways to improve their roster if they hope to return to the NBA Finals. They swept a dysfunctional Nets team that lacked chemistry in the first round, defeated the Milwaukee Bucks without Khris Middleton in the second round, then handled the Miami Heat in the Eastern Conference finals. The Heat made the conference finals by defeating the Philadelphia 76ers, who were without MVP candidate Joel Embiid for the first two games of that series.

Acquiring Durant is the closest thing to guaranteeing Boston returns to the biggest stage, especially given they are unwilling to part with Jayson Tatum in any Durant deal. A Tatum and Durant pairing would easily become the best duo in basketball.

Only, of course, if Boston doesn’t gut its roster to get him, which is the sticking point most teams have faced in discussions with the Nets for a trade with Durant. For Brooklyn, acquiring Brown and a healthy Ben Simmons creates one of the best defensive sets of wings in all of basketball. It remains unclear, however, what the rest of the roster looks like in the aftermath of a Durant deal, or whether or not Kyrie Irving is part of the picture after opting into the final year of his contract worth $37M.

The Celtics’ offer is the latest chapter in what’s been a weeks-long saga in the aftermath of Durant’s trade request. Durant has four years worth $198 million left on his deal, creating the illusion that the Nets can wait him out, but the last thing they should want is a messy situation dragging into training camp and the regular season.