Ana de Armas on 'Blonde': 'I didn't feel exploited because I was in control' 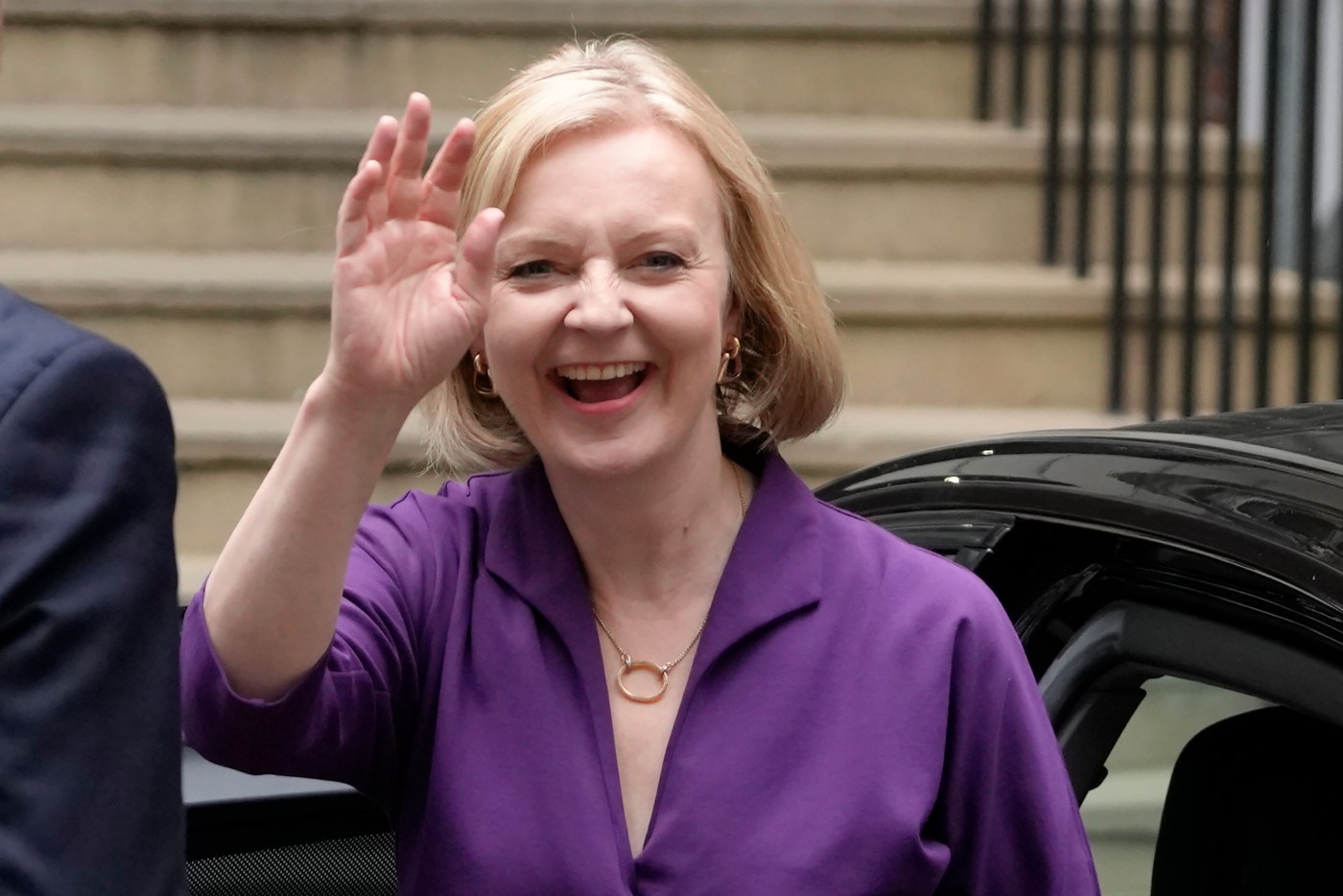 By DANICA KIRKA and JILL LAWLESS

LONDON (AP) — British Prime Minister Liz Truss says she will “tackle the issues that are holding Britain back” in her first speech as the leader of the country.

She promised to grow the economy and make the U.K. an “aspiration nation,” but acknowledged the country faces “severe global headwinds” because of COVID-19 and the war in Ukraine.

Britain is facing its worst cost-of-living crisis in decades, with inflation above 10% and energy bills soaring for both businesses and households.

Truss became prime minister by winning a Conservative Party leadership election on Monday. She replaces Boris Johnson as leader of both the party and the country.

At the top of her inbox is the energy crisis triggered by Russia’s invasion of Ukraine, which threatens to push energy bills to unaffordable levels, shuttering businesses and leaving the nation’s poorest people shivering in icy homes this winter.

Truss, who refused to spell out her energy strategy during the two-month campaign to succeed Boris Johnson, now plans to cap energy bills at a cost to taxpayers of as much as 100 billion pounds ($116 billion), British news media reported Tuesday. She is expected to unveil her plan on Thursday.

“You must know about the cost of living crisis in England, which is really quite bad at the moment,” said Rebecca Macdougal, 55, who works in law enforcement, outside the Houses of Parliament.

“She’s making promises for that, as she says she’s going to deliver, deliver, deliver. But we will see in, hopefully, the next few weeks there’ll be some announcements which will help the normal working person.”

Truss, 47, took office Tuesday afternoon at Balmoral Castle in Scotland, when Queen Elizabeth II formally asked her to form a new government in a carefully choreographed ceremony dictated by centuries of tradition. Johnson, who announced his intention to step down two months ago, formally resigned during his own audience with the queen a short time earlier.

It was the first time in the queen’s 70-year reign that the handover of power took place at Balmoral, rather than Buckingham Palace in London. The ceremony was moved to Scotland to provide certainty about the schedule, because the 96-year-old queen has experienced problems getting around that have forced palace officials to make decisions about her travel on a day-to-day basis.

But as a national leader selected by less than 0.5% of British adults, Truss is under pressure to show quick results.

Ed Davey, leader of the opposition Liberal Democrats, on Tuesday called for an early election in October — something that Truss and the Conservative Party are highly unlikely to do since the Tories are slumping in the polls.

“I’ve listened to Liz Truss during the Tory leadership (campaign) and I was looking for a plan to help people with their skyrocketing energy bills, with the NHS crisis and so on, and I heard no plan at all,” he told the BBC. “Given people are really worried, given people are losing sleep over their energy bills, businesses aren’t investing because of the crisis, I think that’s really wrong.”

Johnson took note of the strains facing Britain as he left the prime minister’s official residence at No. 10 Downing Street for the last time, saying his policies had left the government with the economic strength to help people weather the energy crisis.

Always colorful, he thinly disguised his bitterness at being forced out.

“I am like one of those booster rockets that has fulfilled its function,” Johnson said. “I will now be gently re-entering the atmosphere and splashing down invisibly in some remote and obscure corner of the Pacific.’

Many observers expect Johnson to attempt a political comeback, though he was cyrptic about his plans. Instead, the man who studied classics at the University of Oxford backed Truss and compared himself to Cincinnatus, the Roman dictator who relinquished power and returned to his farm to live in peace.

“Like Cincinnatus, I am returning to my plow,” he said.

Johnson, 58, became prime minister three years ago after his predecessor, Theresa May, failed to deliver Britain’s departure from the European Union. Johnson later won an 80-seat majority in Parliament with the promise to “get Brexit done.”

But he was forced out of office by a series of scandals that culminated in the resignation of dozens of Cabinet secretaries and lower-level officials in early July. That paved the way for Truss, a one-time accountant who was first elected to the House of Commons in 2010.

Many people in Britain are still learning about their new leader.

Unlike Johnson, who made himself a media celebrity long before he became prime minister, Truss rose quietly through the Conservative ranks before she was named foreign secretary, one of the top Cabinet posts, just a year ago.

She is expected to make her first speech as prime minister Tuesday afternoon outside No. 10 Downing Street.

Truss is under pressure to spell out how she plans to help consumers pay household energy bills that are set to rise to an average of 3,500 pounds ($4,000) a year — triple the cost of a year ago — on Oct. 1 unless she intervenes.

Rising food and energy prices, driven by the invasion of Ukraine and the aftershocks of COVID-19 and Brexit, have propelled U.K. inflation above 10% for the first time in four decades. The Bank of England forecasts it will hit 13.3% in October, and that the U.K. will slip into a prolonged recession by the end of the year.

Train drivers, port staff, garbage collectors, postal workers and lawyers have all staged strikes to demand that pay increases keep pace with inflation, and millions more, from teachers to nurses, could walk out in the next few months.

Truss, a low-tax, small-government conservative who admires Margaret Thatcher, says her priority is cutting taxes and slashing regulations to fuel economic growth. Critics say that will fuel further inflation while failing to address the cost-of-living crisis. The uncertainty has rattled money markets, driving the pound below $1.14 on Monday, its weakest since the 1980s.

In theory, Truss has time to make her mark: She doesn’t have to call a national election until late 2024. But opinion polls already give the main opposition Labour Party a steady lead, and the worse the economy gets, the more pressure will grow.

In addition to Britain’s domestic woes, Truss and her new Cabinet will also face multiple foreign policy crises, including the war in Ukraine and frosty post-Brexit relations with the EU.

Truss, as foreign secretary, was a firm supporter of Ukraine’s resistance to Russia. She has said her first phone call with a world leader will be to President Volodymyr Zelenskyy.

Truss has also pledged to increase U.K. defense spending to 3% of gross domestic product from just over 2% — another expensive promise.

But she’s likely to have much cooler conversations with EU leaders, who were annoyed by her uncompromising stance as foreign secretary in talks over trade rules for Northern Ireland, an unresolved Brexit issue that has soured relations between London and Brussels. With the U.K. threatening to breach the legally binding divorce treaty, and the EU launching legal action in response, the dispute could escalate into a trade war.

“I think she’s got a big, challenging job ahead of her,” Robert Conway, 71, an electronics manufacturer, said in London. “Hopefully she’ll bring that, a new team, a new start, but it’s going to be a challenging job.”

Ana de Armas on 'Blonde': 'I didn't feel exploited because I was in control'